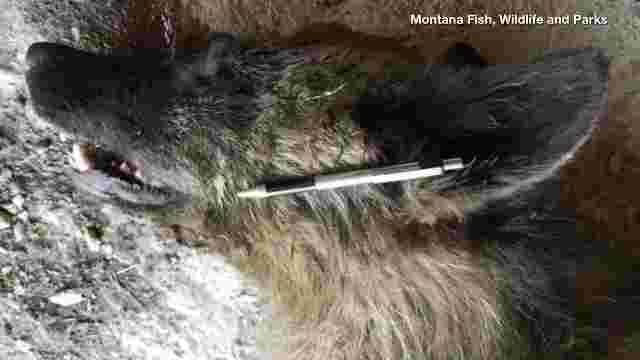 Was it a wolf, some type of hybrid, or a creature that hasn’t been seen in Montana since the Ice Age?

On May 16 a lone wolf-like animal was shot and killed on a ranch outside Denton. With long grayish fur, a large head and an extended snout, the animal shared many of the same characteristics as a wolf; but its ears were too large, it’s legs and body too short, its fur uncharacteristic of that common to a wolf.

So far, the exact species is a mystery 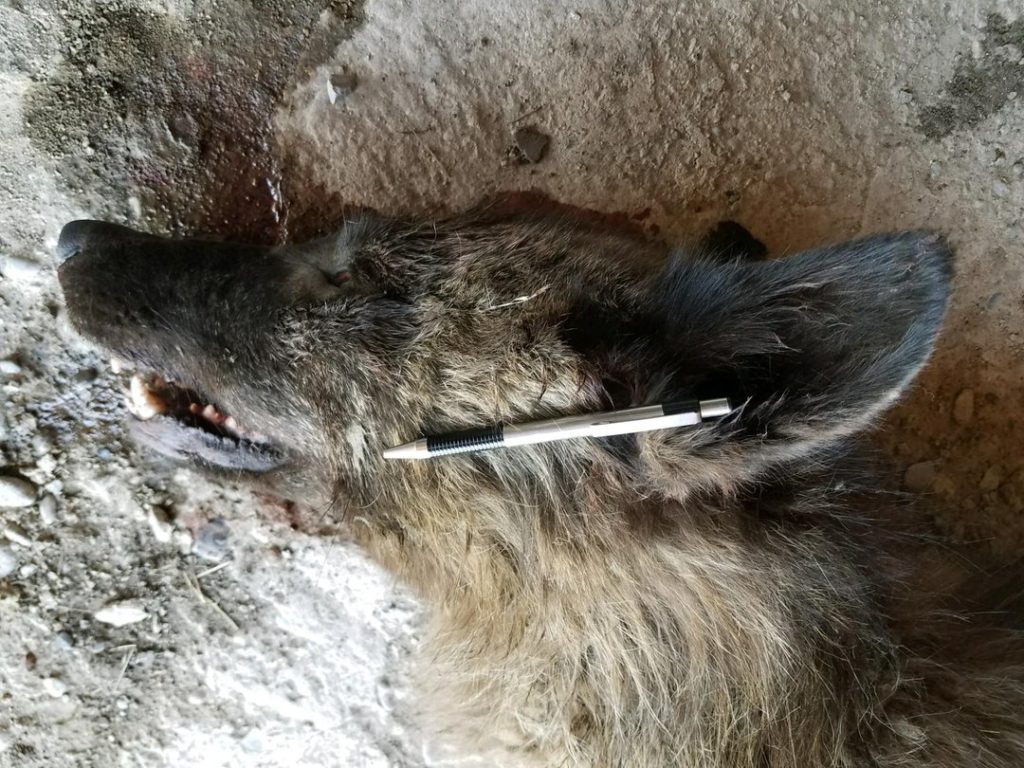 “We have no idea what this was until we get a DNA report back,” said Bruce Auchly, information manager for Montana Fish, Wildlife and Parks. “It was near a rancher’s place, it was shot, and our game wardens went to investigate. The whole animal was sent to our lab in Bozeman. That’s the last I ever heard of it.” 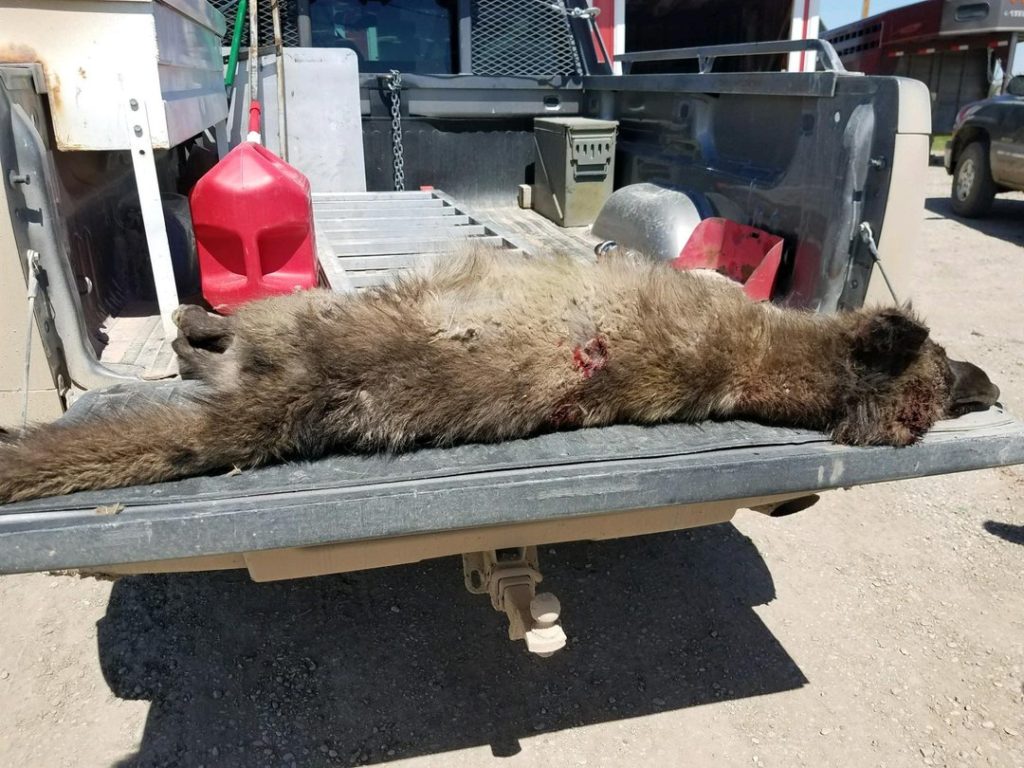 Social media from around the Lewistown area was buzzing last week; with many people chiming in on what they believed the creature to be.

“That’s a grizzly cub,” one commentator wrote. “Under a year and starving from the look.”

“Maybe a dire wolf,” wrote another, “because I don’t believe they are all gone.”

Speculation roamed as far as identifying that animal as a crypto-canid species said to roam the forests of North America.

“That could very well be what’s being called Dogman,”  one poster suggested. “They’re spotted each day and the government quells any and all reports. Several people report being strong armed into keeping quiet about their reports by men wearing black suits. These are just facts. Look into if if you don’t believe it.”

“First off (dire wolf) was a song by the Grateful Dead from 1971,” he said of the prehistoric species speculation. “I know; I listened to it many times. Number two, it’s a prehistoric animal, like mastodons and saber toothed tigers; so it doesn’t exist.” 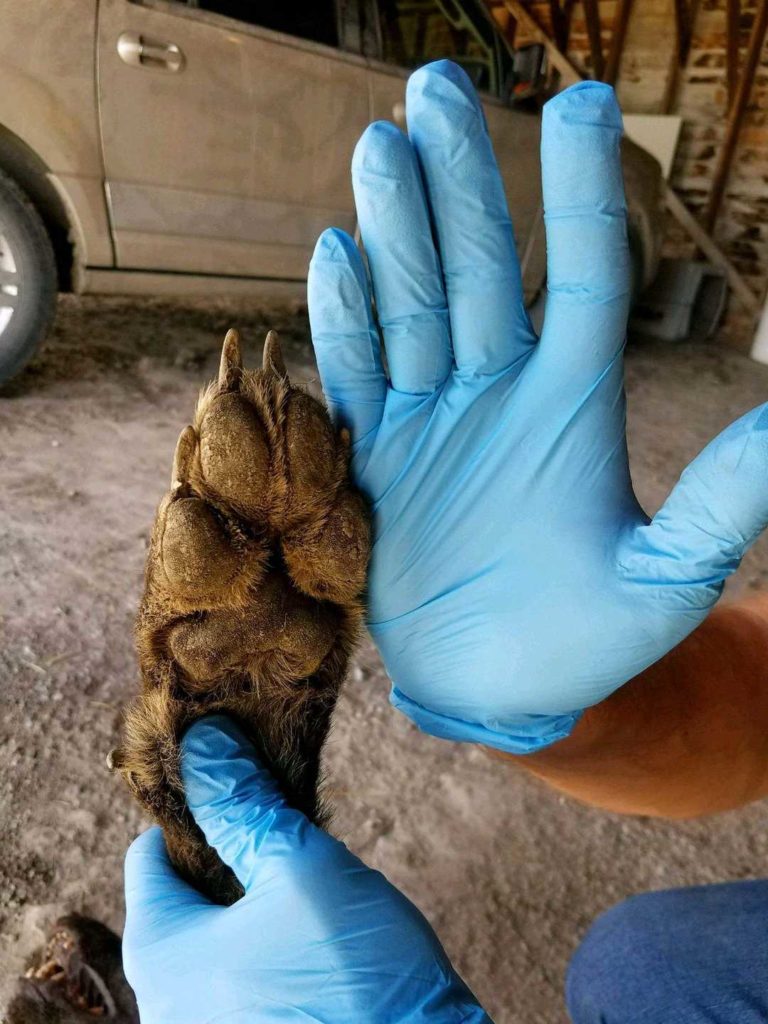 As for the Dogman theory; there’s a regular Friday night YouTube broadcast called “Dogman Encounters” for those who wish to follow up on that line of thought. It comes on right after “Bigfoot Eyewitness” radio.

Nonetheless, there remains an element of uncertainty about the creature, even among wildlife biologists.

“Several things grabbed my attention when I saw the pictures,” said Ty Smucker, wolf management specialist for Montana FWP. “The ears are too big. The legs look a little short. The feet look a little small, and the coat looks weird. There’s just something off about it.”

Smucker’s own speculation runs toward some type of wolf/dog hybrid. He noted several occasions within the last few years in which canid predators, neither all wolf nor all dog were causing problems with ranchers east of the Continental Divide.

“We’ve had a few instances of wolf/dog hybrids out there,” Smucker said. “One was out somewhere in eastern central Montana killing sheep like crazy. Finally, we caught it and it turned out to be a hybrid.” 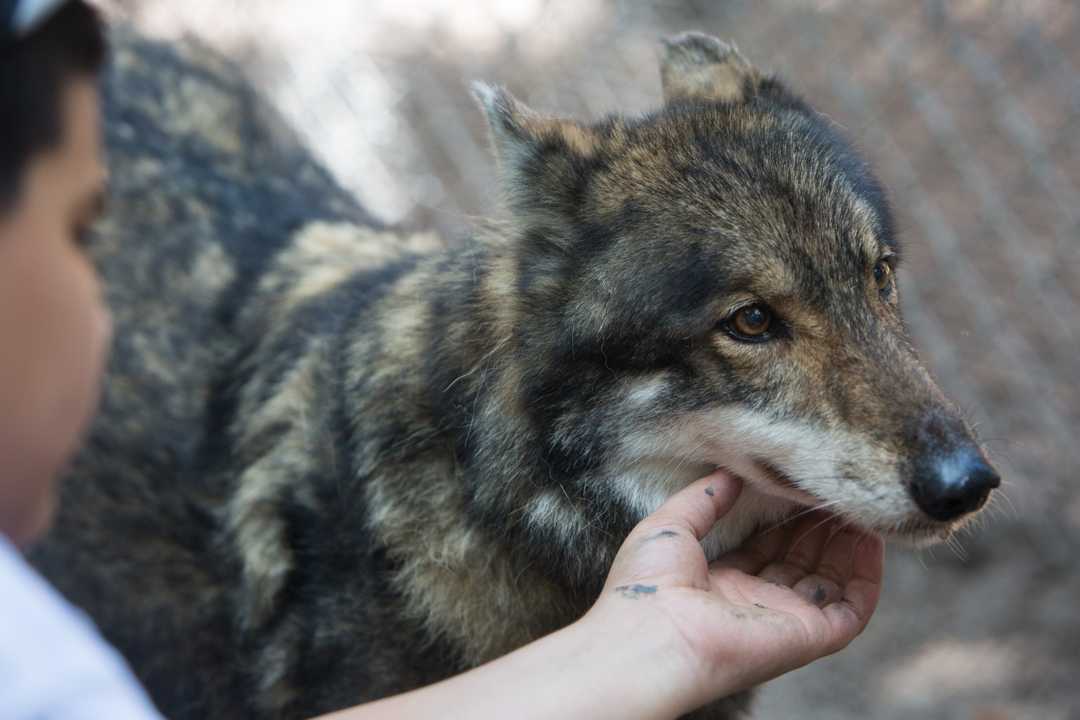 Elijia Velez, 14, pets a wolfdog during the Children’s Network of Southwest Florida’s guided visit at the Shy Wolf Sanctuary in Naples, Florida on August 27, 2016. In addition to meeting the animals, the kids also completed two painted murals during their visit that will hang on the animal cages.
Nicole Raucheisen/Naples Daily News

Wolves and dogs are unique in the animal world, in that they can interbreed and produce offspring that can, in turn, produce their own litters. This is unlike the pairing of a horse and a donkey, which will produce a mule; but mules are always infertile and incapable of producing offspring on their own.

According to the International Wolf Center, nearly all wolfdogs are bred in captivity. Wolves and dogs can breed in the wild, but this occurrence is very rare; largely because wolves are very territorial and more likely to kill an unfamiliar dog that enters their home range rather than accept it into a pack.

Wolfdogs are heavily regulated and hybrids should have a tattoo identifier

The behavioral tendencies of wolfdogs are unpredictable, ranging from bold, aggressive and territorial; to placid, submissive and friendly – even among pups within a single litter. For that reason, the breeding of wolfdogs in captivity is highly regulated.

The unfortunate consequence is that some wolfdog owners discover they are either incapable or unwilling to care for their animals, and end up releasing them into the wild.

“Every year, thousands of pet wolves or hybrids are abandoned, rescued or euthanized because people purchase an animal they were not prepared to care for,” the International Wolf Center states. “A few facilities exist around the country that take in unwanted canines, but their resources are usually very limited.” 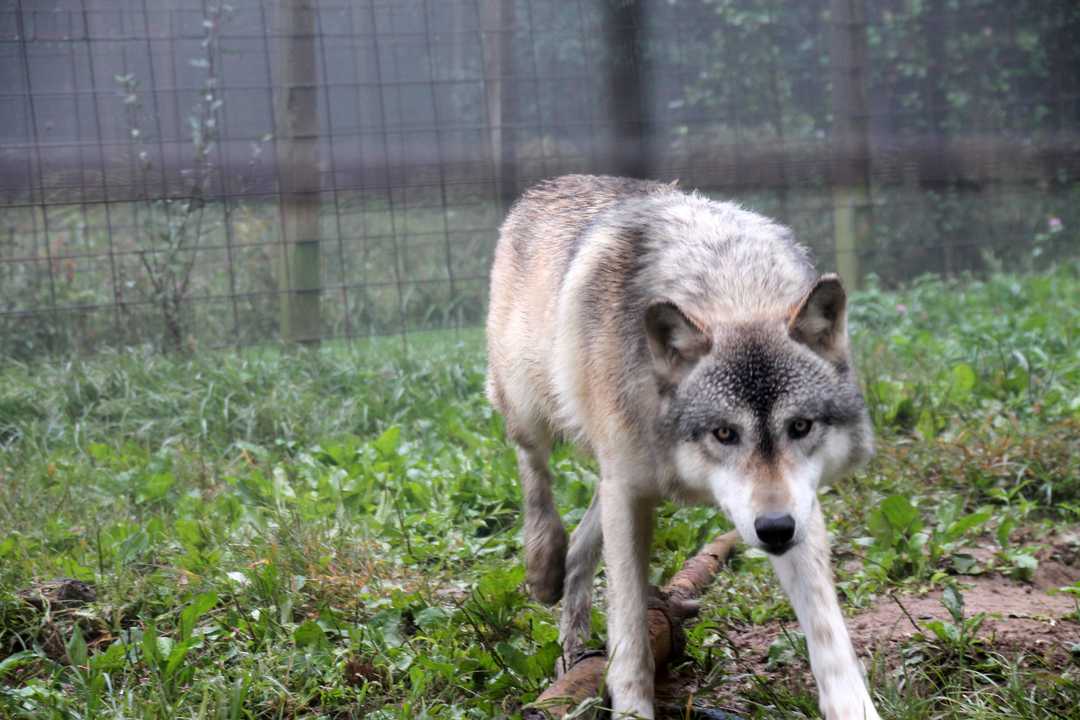 Aries, 8-years-old and 130-pounds, is one of the 60 rescued or abused wolfdogs who lives at Full Moon Farm in Black Mountain on September 28, 2015. Aries is a high content wolfdog whose family lineage dates back to the Chicago Zoo in the 1960s.
Abigail Margulis/am[email protected]

It is not clear whether the animal shot in Denton falls into this category, but the problem of irresponsible wolfdog owners is well known by FWP officials.

“Over the years we’ve had incidences of hybrids where someone has a wolfdog – and I don’t know if it gets too big or if it just wants to be free and wanders off,”

The animal shot near Denton was not directly implicated in any livestock predation, but as FWP warden Zach Norris noted, the ranching family who shot it were well within their legal right to do so.

“It was real close to the cattle and residences,” Norris noted. “There were domestic dogs in the area and then there were children. It was legitimate for the wolf-like animal to be shot based upon Senate Bill 200. Everything was okay with it.”

Passed by the Montana legislature in 2013, SB 200 both established a wolf hunting season and made it legal for a landowner to kill a wolf at any time when the wolf is on the landowner’s private property and poses “a potential threat to human safety, livestock or dogs.”

Under SB 200, property owners who do kill a wolf are obligated to contact local authorities and allow them the chance to inspect the animal.

“It had already been loaded up and taken to the residence of the landowner,” Norris said of the Denton animal. “Typically if that kind of thing happens, we want the animal to lay where it died so we can investigate from the start.”

Smucker was eager to clear up another misconception sometimes thrown at FWP officials; that the agency is in the habit of relocating problem wolves into areas where they don’t belong.

“People think that we’re out there dropping wolves off everywhere,” Smucker said. “Fish, Wildlife and Parks has been managing wolves in Montana since 2003 or 2004, and we’ve not ever trans-located a problem wolf. The Fish and Wildlife Service tried to do that for awhile, but we just don’t do that.”

According to the department’s official Grey Wolf Conservation and Management Report, Montana Fish, Wildlife and Parks works collaboratively with the federal Wildlife Services to eliminate (kill) Montana wolves with a documented history of livestock depredations.

“I heard a guy talking about, ‘Oh, I saw a Fish, Wildlife and Parks trailer out in eastern Montana at the gas station. I looked in the back and there’s like a dozen wolves in there,” Smucker recalled. “I was like, yeah – maybe there was a sled dog team in there? I don’t know.”

The body of the animal shot outside Denton has now been transported, examined and frozen. Results from its DNA testing will likely take weeks to process.

Smucker notes that the whole debate over positively identifying the Denton animal is something of a side issue. Yes it’s interesting and fun to speculate about, but if a property owner can claim a legitimate threat to the well-being of their family or livestock from any animal; be it a wolf, dog, wolf/dog, dogman or some other mysterious creature, they have the legal right to defend those assets, up to and including using lethal force if necessary.