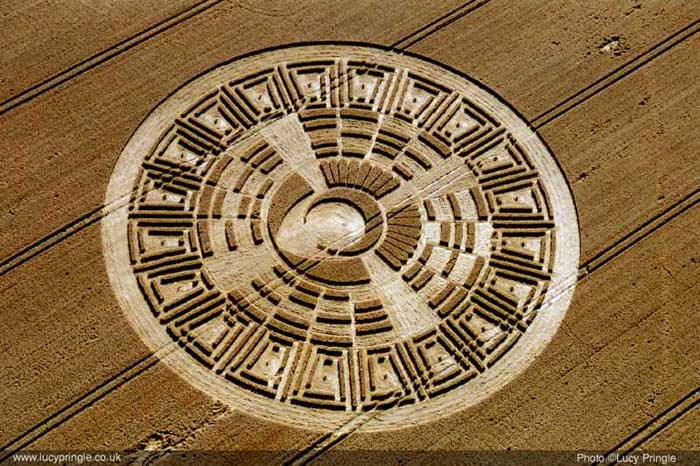 Russian scientists have cracked the crop circle code, stating that a pole shift is impending but its end result will be a shift into 4th dimensional consciousness for those who are able to raise their consciousness in time.
Russian Scientists Crack the Crop Circle Code
In an interview with Lilou Mace, Drunvalo Melchizedek stated, “The  message basically is that there is seven catastrophes on the Earth  coming up.  The first one, the say (is) we have to do something  immediately after we see the first one because once we wait for the  second one, we’ll be completely in survival.  The fourth one, they say,  is the big one, which is probably the pole shift that they’re talking  about.”
“You’re probably not going to make it if you’re not aware of what’s going on.  You need to be aware.  You need to be conscious.”
Drunvalo Melchizedek:
Drunvalo is the author of four books including The Ancient Secret of the Flower of Life, Volumes I & II, Living in the Heart and his newest one, Serpent of Light.  These books have been published in 29 languages and reach out to over one hundred countries throughout the world.
Drunvalo is the first person in the world (in modern times) to mathematically and geometrically define the human body light body called in ancient times the Mer-Ka-Ba.
According the Melchizedek, former Cosmonaut Marina Popvich is one of Russia’s leading spokesmen regarding the research behind the extraterrestrial messages in crop circles.
Prominent Russian scientists, including Russian cosmonaut Dr. Marina Popovich, PhD, as well as Victoria Popova, Dr. Sc., Ph.D., and  Lidia Andrianova Ph.D. have announced a discovery of extraterrestrial  communications in pictograms that extraterrestrial intelligence has  placed in crop circles and in stone monuments around the world.  The  group has created a dictionary of over 250 extraterrestrial pictograms  for interpreting crop circles and stone monuments such as “Stonehenge  and Avebury stone circles in the UK, Machu Picchu, Chavin de Huantar and the Nazca Lines in Peru, the pyramid of Chichen-Itza and the pyramids  of the moon and the sun in Mexico and the Moai of Easter Island and  others.”

Dr. Marina Popovich, PhD, Victoria Popova, Dr. Sc., Ph.D., and Lidia  Andrianova Ph.D. write in their co-authored book “Letters of  Extraterrestrial Civilizations: The Last Warning”, “Extraterrestrial  civilizations (ETC) warn: the weakening of Earth’s magnetic field has  reached a critical value, and threatens the life of mankind. ETC’ instructions in crop circles indicate how to escape from global  cataclysms which will begin very soon.”
Melchizedek stated the Russians broke the code for  the crop circles and can now read them “like we read the  newspaper”.  Mechizedek added that the  Russian  research has determined that crop circles are being created by “many, many,  many extraterrestrial races and they’re all saying the  same message to us and the  message is very, very clear.”

Dr. Marina Popovich “(born July 20, 1931) is a retired Soviet Air Force colonel, engineer, and legendary Soviet test pilot who holds 107 aviation world records set on over 40 types of aircraft. She is one of the most famous pilots in Russian history, and one of the most important female pilots of all-time. Marina Vasilieva became a Soviet Air Force pilot and in 1964, a military test pilot. She authored nine books and two screenplays. Among many other awards, she has been honored as Hero of Socialist Labor, the Order of Courage (presented personally by Vladimir Putin in June 2007)and a star in the Cancer constellation bears her name.”

ET Pictograms predict global cataclysms
Group states that the extraterrestrial pictograms communicate that “Extraterrestrial civilizations (ETC) predict three preliminary catastrophes followed by global cataclysms of a magnitude beyond anything experienced in living memory. There will be a short time period between all these events.” They continue, “ETC warn that civilization has to be pre-informed about the scenario of global cataclysms [before the] beginning [of the] event.  A civilization that is not informed has no chance to make the Transition in time and to prolong life. First pre-cataclysm will be related with interruption of global system of communication – phone, Internet. Pre-informed civilization will avoid shock and chaos of super-powerful disaster and has a chance to make the Transition in time.”
The Russian scientist group “emphasizes that this is a natural cycle of the planet. Part of this process is the development of human consciousness to a point where humanity will have a ‘window of opportunity’ to make the transition to a higher plane of existence. They explain that this point in history can be seen as a kind graduation for humanity to a higher and more subtle level of experience, a type of metamorphosis for humanity connected with ascension.  Nobody can be saved individually, as the transition can be made only through the synchronous unification of human consciousness.
The Russian scientist group states, “The time for humans to escape the devastation through the unification of consciousness will be shortly after the first pre-cataclysm. After second pre-catastrophe humanity will have no chance to prolong life because number of people [remaining alive] will be not enough to start up the mechanism of the transition. In the future humanity will join a galactic community of evolved extra-terrestrial civilizations, linked through consciousness.”
ET: Necessary to inform human population
Group emphasize that it is imperative and necessary to inform the human population of these coming cataclysms.  The group states “Civilization has to be pre-informed. ETC insist to spread widely the information about upcoming cataclysms and the Transition as the only one way to prolong life of Earth humanity.
ETC warn that humanity has to make the decision about the Transition as quickly as possible because after the first pre-cataclysms it will be very difficult to do it. This is related with disconnecting of phone and Internet communications in the result of super-powerful disaster. Not informed civilization has no chance to make the Transition in time and to prolong life.”
Group also added , “ETC inform that global cataclysms will never stop and will become only stronger because the purpose of global cataclysms is the destruction of our planet. So, it is impossible to hide in bunkers which are popular today and are sold in many countries and wait till they end.” How to evaluate the Russian scientist group’s working hypothesis and discovery There are multiple working hypotheses raised in the Russian scientist group’s reported discovery. Each working hypothesis can be evaluated according to independent evidence that tends to support the hypothesis, as is normally done in the scientific method.
1. Crop circles, stone monuments, Extraterrestrial pictograms and ET communications – group claims it has spent 15 years studying crop circles and stone monuments that contain ET pictograms such as the Nazca Lines in Peru.  Their working hypothesis is that “All extraterrestrials’ pictograms in stone transmit preliminary information about the development of consciousness. Crop circles transfer the emergency information and instructions for [humanity’s] salvation [from cataclysm].
The Russian scientist group have completed a dictionary of ET pictograms and 12 books supporting this working hypothesis.  Independent research supports the hypothesis that crop circles and pictograms are ET communications.
Evidence supportive of impending potential Earth cataclysm
2.  Earth magnetic field & Earth cataclysms – The Russian scientist group develop the working hypothesis that ET communications warn that Earth’s magnetic field is weakening which will cause a period of initial cataclysms followed by a period of indefinite cataclysm.  In fact, NASA has concluded that holes in the Earth magnetic field are thought to be one of the factors that could amplify the effects of solar storms,  cause severe earth changes during 2011-13 solar cycle 24.
2012 may bring the “perfect storm” – solar flares, systems collapse
http://www.examiner.com/exopolitics-in-seattle/2012-may-bring-the-perfect-storm-solar-flares-systems-collapse
3.  Mainstream media reporting of gas giant or brown dwarf outside Pluto – Mainstream media such as The Independent and CNN have been reporting the existence of a giant celestial body four time the size of Jupiter – perhaps a gas giant or brown dwarf star or planet – outside the solar system beyond Pluto.
4. Astrophysicist Alexei Dmitriev warns of imminent global catastrophe from photon belt
One report states, “Astrophysicist Alexei Dmitriev says that both Voyager 1 and Voyager 2 satellites reveal that our sun, as well as our entire solar system, is now moving into an interstellar energy cloud. Opher, a NASA Heliophysics Guest Investigator from George Mason University says this interstellar energy cloud is turbulent.  Dmitriev explains that this cloud of energy is exciting the atmospheres of our planets and especially our sun. As this interstellar energy cloud continues to excite/charge the sun, it causes the sun to become more active, resulting in greater output from the sun. IE: Bigger and more frequent solar storms and CME’s resulting in the Carrington effect.  This interstellar cloud of electrical energy is also absorbed by the Earth, and scientist have found that it results in more earth quakes, all while dramatically effecting our weather here on earth. When asked how long will it take our sun to pass through this interstellar energy cloud, Dr. Dmitriev replied, “I don’t know. But If I had to guess, I would say somewhere between two thousand to three thousand years.” This interstellar cloud is a wispy band of charged particles through which our solar system is slowly moving through.

“When Dr. Dmitriev was asked what are the implications of all this for earth he replied, “Global catastrophe! Not in tens of years from now, but in ones of years” …in that this global catastrophe is basically right around the corner setting the stage for NASA’s latest solar storm warning 2012-2013.” 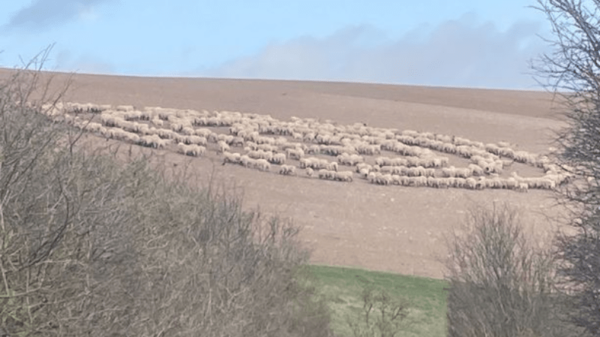 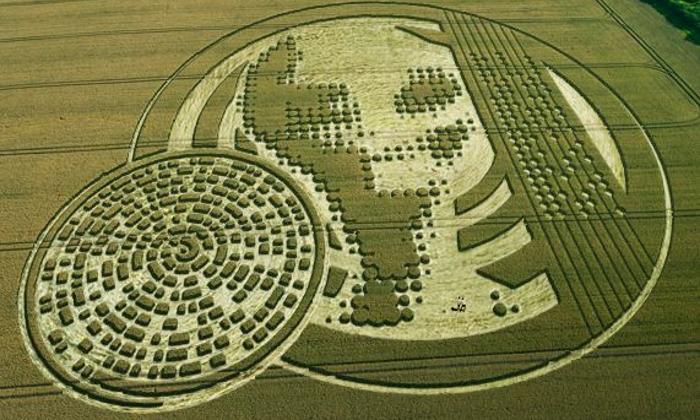 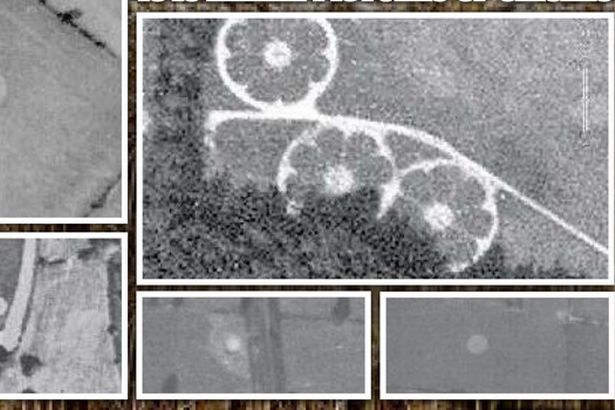 Are all crop circles man-made ?

A crop circle expert from Australia believes that he has evidence to suggest that they aren’t. While there is no doubt that a lot... 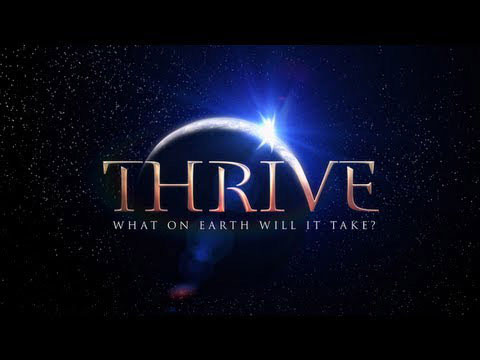