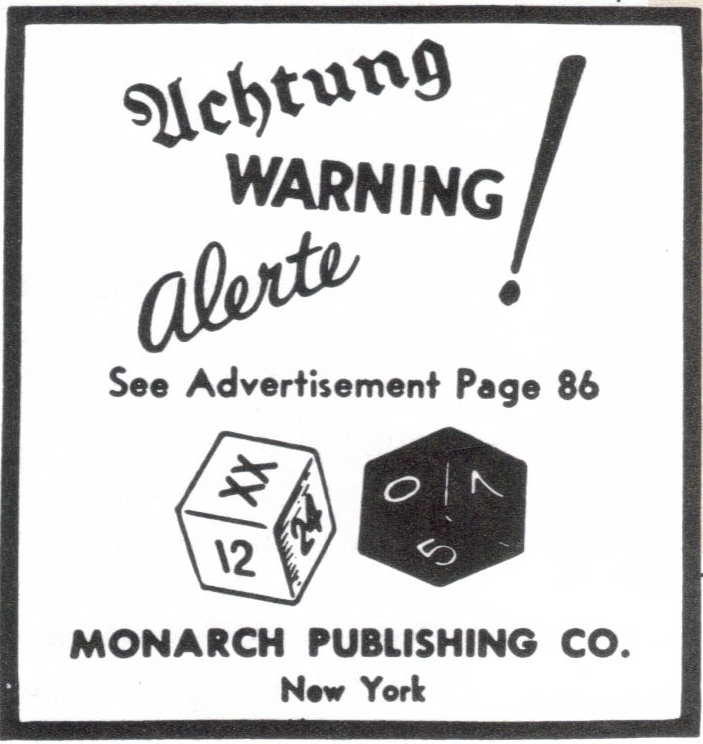 A few weeks before the Pearl Harbor attack, a pair of strange ads appeared in the New Yorker. They seemed to be advertising a dice game called The Deadly Double. One of the ads showed a pair of dice with the characters 0, 5, 7, xx, 24, and 12 on the visible faces. Above were warnings in a variety of languages: “Achtung! Warning! Alerte!” The other ad showed people in a bunker and explained that the dice game was essential air raid survival gear. The company logo was a suspiciously Germanic looking double eagle.
The ads have a somewhat strange design, but only in retrospect did they appear to contain a coded message. The numbers could allude to the date of the Pearl Harbor attack (12/7), with the other numbers representing codes to be deciphered by sleeper agents in the U.S. The Deadly Double itself was thought to refer to the twin threats of Germany and Japan.
Like many mysteries, retellings of this story emphasize the unknown and leave out crucial facts. The 0 and 5 are sometimes thought to foretell the exact time of the attack, but the first aircraft opened fire on Pearl Harbor at 7:48 a.m. local time. Books on mysterious events like to leave this story unresolved, as though the identity of the ads’ creator remains unknown to this day. In truth, it was traced to a game company in Chicago that made a dice game called the Deadly Double. Their war-themed ad might seem like poor taste today, but the numbers on the dice matching the date of Pearl harbor was pure coincidence. Still, it was weird enough that the FBI got involved.

No sooner had the Japanese bombed Pearl Harbor, Hawaii on December 7, 1941, that the home front became obsessed that lurking in the shadows was a Japanese traitor or Nazi spy, saboteur, or subversive hiding behind every bush, gathering all of the United States’ valuable information.
As a result of the attack on Pearl Harbor, the nation was on high alert for spies, especially “suspicious looking Orientals.” Many law enforcement officials took matters into their own hands. At a major naval base in Norfolk, Virginia, the chief of police located all Japanese aliens living in his city and ordered them jailed – all fourteen of them. In Newark, New Jersey, police officers’ were given the authority to board trains and arrest all suspicious looking Orientals and to use their own judgement when determining if an individual of Oriental origin “looked suspicious” or not. Other state’s followed, singling out many individuals as “suspicious looking Orientals.”
Meanwhile, agents of the Federal Bureau of Investigation spread out across the nation and methodically picked up several thousand individuals listed on their subversives. ( by July 1942, a total of 9,405 loyalty suspects were taken into custody by the FBI.) In addition to that overwhelming task, the FBI agents had to track down or follow up on the many rumors that flooded the agency’s field offices about people assisting in the attempted sabotage of the United States.

On page 86 the same words were blaring across the pages in bigger text: “Achtung! Warning! Alerte!” Below the headline were the words ‘The Deadly Double.” An image of a stylized drawing of an eagle appeared below the words.
After the attack on Pearl Harbor, there was speculation that the ads were placed by Nazi and/or Japanese spies as a way of communicating to their agents in the United States that war was imminent.
The numbers 12 and 7 could have represented the month (December) and the day (the 7th) and the numbers 5 and 0 the time of the planned attack. The XX could have stood for the approximate latitude of the target. The numbers 24 could have been a code to designate which enemy has actually placed the ad.
The layout and drawing of the larger ad on page 86 brought about more theories regarding the intended message. A drawing of what appears to be the noses of three bomber planes flying over the ocean toward their target, which everyone assumed to be Pearl Harbor with what looks like a bomb exploding on the water, antiaircraft shells bursting in the skies, and searchlight beams crisscrossing the sky.
The words “The Deadly Double” has been interpreted to represent the war partners, Nazi Germany and the Empire of Japan. The image of the eagle seemed similar to the symbol of Adolf Hitler’s Third Reich.

The FBI discovered Monarch Trading Company as the party responsible for placing the ad. However, it turned out to be a dummy corporation. A white male was identified as the person who physically brought the plates down to the New Yorker and paid for the ad in cash. Of course, he did not leave his name or his address. The FBI was eventually able to identify the man but he mysteriously died a sudden, violent death a few weeks later.
To this day, the question remains: Was the ads placed in the New Yorker a sophisticated means of communication for German and Japanese espionage operatives in the United States to warn their allies that the Japanese were about to launch a sneak attack somewhere in the Pacific? Swamped by a deluge of other investigations in light of the Pearl Harbor attack, the understaffed FBI was unable to explore the possibility which is very unfortunate, because once again, on Tuesday, September 11, 2001, at 8:46 a.m., the United States was subjected to yet another sneak attack by al-Qaeda led by Osama bin Laden.
It was claimed at the time that the 12 and 7 could have referred to the date of the attack (December 7); 5 and 0 may have indicated the time of the attack and the XX (20) might have stood for an approximate latitude of the target. As for the other advert (see left) at the bottom were the words THE DEADLY DOUBLE and underneath this was a double headed heraldic eagle with a shield bearing a double cross (XX). This was all very similar to the armorial device of Germany.
These suspicions were taken seriously enough to be investigated by FBI agents and they made visits to the people who had placed the advertisements. These were a Mr and Mrs Roger Craig.
The game turned out to be legitimate and was sold in several New York stores.
The fact that the US government had looked into the matter was kept under wraps until 1967 when a U.S naval intelligence officer, Ladislas Farago, broke the story in a press release for a book he had written called The Broken Seal.
At the time Roger Craig’s widow was emphatic that any connection between the advertisements and Pearl Harbor ‘was just one big coincidence.’
In this article:attack, Deadly Double, FBI, Pearl Harbor