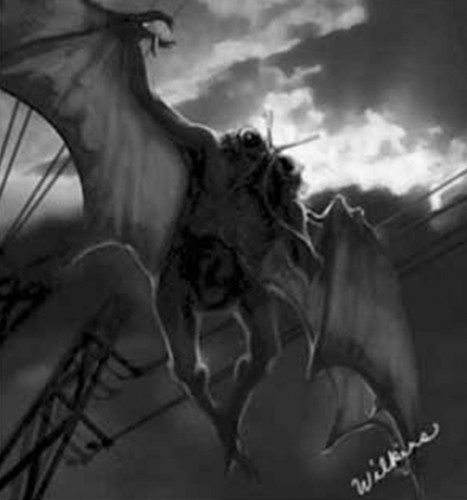 As I’ve exclaimed in previous articles, The legend of Mothman is something that mesmerizes me. Why? I have no idea, but when something peaks my interest, I have to investigate any new information that comes along.

This latest foray into the Mothman enigma comes from my friend Mike Perry over at 67 Not Out. Mike is famous for his stories associated with synchronicity, but today he’s on the trail of Mothman.

Mike received a letter from a woman identified only as Shiela. From what I can gather, Sheila’s experience has impacted her to the point of never again walking in the woods:

Was This A Mothman Sighting?

“I was walking in the woods near to where I live with my friend James. This is something we often do.

“We came to a clearing when we saw a dead animal, which we took to be a horse. It was in a terrible mutilated state with it’s head almost severed from it’s body. We went closer and saw that the animals eyes were gone and two of the legs had been torn off.

“It was upsetting to see this but we kept on with our walk. A few moments later I saw something move to one side of me but as I turned to look whatever it was had disappeared.

“After a few minutes I heard a shrieking noise but James didn’t hear anything. I looked behind me where the noise was coming from and I saw the scariest creature I have ever seen or want to see again. It was very tall, maybe 10 feet tall and was completely black other than for two eyes which were red and very large.

“I know that this may appear unbelievable but the creature had two black wings like those of an angel. It said something I didn’t understand which was like a different language and then flew away.

“I saw this as clearly as I could see James but he says he saw and heard nothing and that I must have watched too many vampire films. But I did see it and I was shaking with fear. All I wanted to do was to go home. I know I will never walk in the woods again.”

As I have read hundreds and hundreds of these type stories, I have developed a nose for BS. I can say with confidence that this in my opinion is a true event. Do I think Sheila encountered Mothman or some other crypto-creature? That I can’t say, but with so much unknown to us, sometimes you have to just give in and accept what a person tells you.

Getting to the core of the story, there was a battle between Colonials and a multi tribe contingent where the white settlers overpowered the Indians with their superior fire-power. This battle took place in the area of the now Mothman associated Point Pleasant, West Virginia.

After the battle, the Indians were driven west into Ohio. However, the Shawnee Chief Cornstalk made peace with the Colonials who had since built a fort to stave off future attacks. In 1777, the British began inciting the previously conquered tribes to attack the fort. Cornstalk alerted the settlers to the plan and told them his tribe preferred to avoid involvement. However, he couldn’t guarantee that some Shawnee braves wouldn’t fight as he was not going to stop those who chose to join in the assault.

Garrison Commander, Captain Arbuckle, who had been Cornstalk’s ally up to that point took the Shawnee Chief hostage in hopes that it would stop the attack, which it did. Unfortunately, things got messy as a Colonial was attacked and killed while hunting, prompting some vigilante soldiers to execute Cornstalk as retribution. Not only did they kill the Chief, but they also murdered his son who was visiting at the time.

As Chief Cornstalk lay dying he put a curse on the land:

I was the friend of the borderman. Many times I have saved him and his people from harm. I never warred with you, but only to protect our lands I refused to join your enemies in the red coats. I came to the fort as your friend and you murdered me and have murdered by my side, my young son. For this, may the curse of the Great Spirit rest upon this land. May it be blighted by nature, may it be blighted in its hopes. May the strength of it’s people be paralyzed by the stain of our blood

Chief Cornstalk was buried near the (Point Pleasant) fort.

Some believe that Mothman is a type of Thunderbird spirit which have been associated with indian folklore for hundreds of years. There are those convinced that the Cornstalk curse is responsible for the following disasters:

1907-The worst coal mine disaster in american history took place in Monongah, west Virginia on December 6, when 310 miners were killed.

1944-In June, 150 people were killed when a tornado through the tri-state area.

1967-On December 15, the Silver Bridge collapsed killing 46 people and injuring 9.

1970-On November 14, a Southern Airways DC-10 crashed into a mountain near Huntington, West Virginia killing 75 people.

1976-In March there was an explosion at the Mason County Jail in Point pleasant. Harriet Sisk was under arrest for the murder of her infant daughter. On March 02, her husband came into the jail with a suitcase full of explosives. Both the Sisk’s were killed, along with three law enforcement staff.

1978-In January, a freight train derailed at Point Pleasant, dumping thousands of gallons of toxic chemicals. The chemicals contaminated the towns water supply and the wells had to be abandoned.

1978-In April of the same year, the town of St. Mary’s was struck with tragedy when 51 men who were working on the Willow Island Power Plant were killed when their construction scaffolding collapsed.

Could the Mothman be appearing in other areas of the world based on various curses laid upon the land?

Many will tell you that the Mothman is a harbinger or warning of impending disaster. If that were the case then it would go against any line of thought associated with a curse.

The mystery of Mothman lives on and I don’t see it being solved any time in the near future….if there is a Mothman at all, that is.

The strange events that took place in the area of ​​the American town of Point Pleasant in the state of West Virginia have not...

In December 2019, the 60-year-old David Ramos, a former Chicago policeman who is now retired, contacted The Singular Fortean Society. Ramos worked in the...

Manuel Navarette of UFO Clearinghouse received a report recently from a man who said he was standing outside of a cargo dock at O’Hare...

The Case Of The Chicago Mothman

Editor’s Note: Listen to the kid-friendly version of the audio story here.  The Chicago region has been experiencing a collective case of the heebie-jeebies...

A Messenger of Catastrophe?

A number of sightings depicting  a man-sized humaniod, with glowing red eyes and 10-foot wingspan has been associated with catastrophic events of the past...

Josh Terry Vice illustrated by Lia Kantrowitz It was a normal summer night for John Amitrano, working a Friday shift as security for Chicago’s popular Logan...