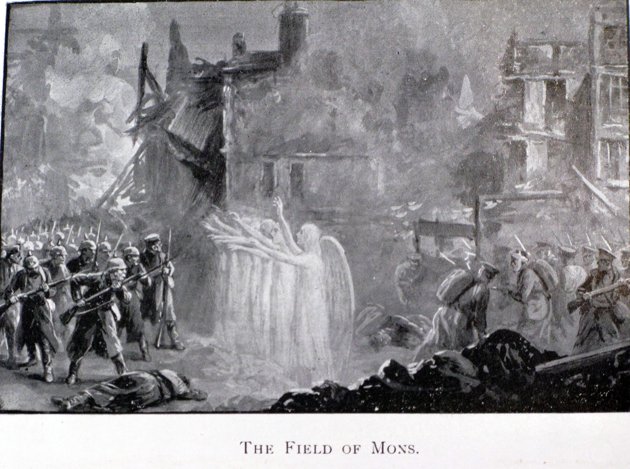 An ‘Angel’ which many British soldiers credited with saving their lives in one of the first, brutal battles of World War I may not have been sent from heaven after all – but from the stars.

UFO authors suspect that the famous “Angel of Mons” – described as either St George, St Michael, angels, or crowds of angelic warriors, may in fact have been extraterrestrial.

Many soldiers credited the strange apparitions with saving their lives – and it became a staple of parish magazines. The battle had been one of the first in which the British faced the Germans – and despite retreating, only 1,600 lives were lost.

Decades later, the story is still “swathed in controversy” according to Nigel Watson, author of the Haynes Manual for UFO Investigations, with some attributing the ‘Angel’ to a short story from the Evening Standard, others to British intelligence.

Kevin Goodman, a UFO expert and author of books of mysterious encounters in the UK, says
“The UFO enigma was unknown during the First World War conflict; the troops would relate to an event such as this in the only way they could, by thinking that they had a sign from God.”

Cas Lake, the radio presenter of the Unexplained Show says that both answers might be true, in a way – what the culture of 1914 would have described as ‘angels’, we would describe as extraterrestrials. The ‘Angels’ reported at the time“My belief would be,” she says, that “If these angels did appear it was to protect and alter the future, and maybe also to help the belief in Angels. I certainly believe spiritual beings can intervene when needed.”

Among UFO enthusiasts, many believe that UFOs and angels are the same thing – or that sightings of angels have been of extraterrestrials, or even vice versa. A quick trawl of the web finds dozens of sites devotes to the topic.

Goodman, a writer based in Warminster, says that it is a case of cultural change: “The phenomenon has taken many guises throughout history. In times of stress, fear and possible imminent death one finds solace in something that we can relate to.”

Albert S Rosales says that there may have been several forces at work – many of them human. Rosales runs a website devoted to sightings of humanoid aliens and angels, and says, “Were
supernatural entities seen specifically at Mons? Perhaps. In every war there are such stories which remain between the realm of folklore and truth. Perhaps they are  later exaggerated by religiousauthorities and maybe even the Government possibly to boost morale among the troops.

It’s clear that the soldiers themselves believed that something supernatural had intervened.

In Harold Begbie’s On the Side of the Angels, he quotes an anonymous Lance-Corporal who testified that during the retreat on 28 August 1914: “I could see quite plainly in mid-air a strange light which seemed to be quite distinctly outlined and was not a reflection of the moon, nor were there any clouds in the neighbourhood. The light became brighter and I could see quite distinctly three shapes, one in the centre having what looked like outspread wings, the other two were not so large, but were quite plainly distinct from the centre one. They appeared to have a long loose-hanging garment of a golden cloak.”

The story became almost a cult at the time. Books on it were published – as it ‘proved’ that God was on Britain’s side. Poetry celebrated the Angelic intervention: “They knew that holy angels/Were fighting on their side,” said one by Dugald MacEhern. These circulated widely in parish magazines. Books based on the incident became bestsellers
But the origins of the story remain mysterious. Clearly some soldiers saw what they believed to be angels – but was the story manipulated for Government purposes?

Brigadier-General John Charteris wrote in a letter, “…then there is the story of the ‘Angels of Mons’ going strong through the 2nd Corps, of how the angel of the Lord on the traditional white horse, and clad all in white with flaming sword, faced the advancing Germans at Mons and forbade their further progress.

Charteris was said to work covertly for British intelligence – adding weight to the idea that battlefield hallucinations had been warped for political reasons.

Others claim that the story is simple fiction. The popular author Arthur Machen claimed that this legend was created by his fictional ‘The Bowmen’ story published in The Evening News, 29 September 1914.

In it, British soldiers call on St George for aid, and are helped by ghostly bowmen from the Battle of Agincourt. One fact that lends weight to this theory is that few reports of the incident exist before Machen’s story.

Nigel Watson, author of the upcoming book ‘UFOs of the First World War’ says, “Even today the legend is swathed in controversy. Theories about it range from it being a myth based on Machen’s story, the product of hallucinations due to stress and exhaustion, real angelic visitations, ghosts, swamp gas, airships or alien UFOs projecting or shaping themselves to the expectations of the witnesses.”

John Rimmer, the editor of the online Magonia Review, puts forward the idea that Machen and the soldiers were responding to a spiritual need:

“Amid the horrors of the First World War the desire for such spiritual intercession would be so strong in the minds of soldiers that, unable to find expression in any more ‘rational’ way, it was projected externally in the form of a memorable vision. Machen, more remote from the grim reality, and as a writer possessing an acceptable way of expressing these deep emotional responses, created an equally memorable ‘fiction’ from the same set of stimuli.”

In this article:Angel of Mons, UFO