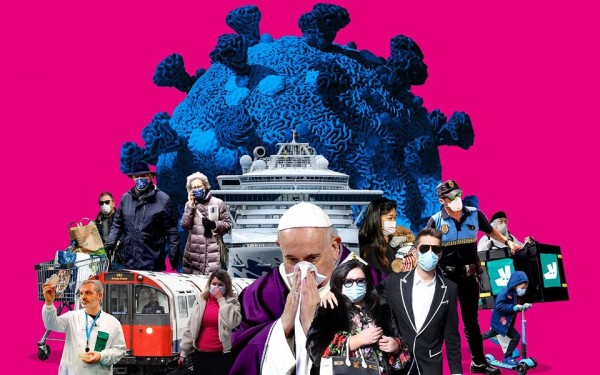 It can be said milder, the virus was “predicted”.

Forget about Vanga, Nostradamus, Zarathustra, the holy elders, astrology and even the Bible. Nowadays, cartoons, books, films, magazine covers and comics are engaged in predictions. And unlike the gray-haired and bearded seers of the past, the new prediction formats work precisely, on time and with meticulous details. No more tarot cards, no stars, no coffee grounds, fiction reads. Just flip through comics and you will be happily satisfied.

When the official 9/11 version was publicly ‘distributed’, people looked away from the numerous hints of text, visual, digital and other evidence that preceded the terrorist attack with the Twin Towers in 2001. Then, the Internet was not really there. But when it appeared, the conspiracy theorists gasped – the public info space was just dotted with dozens of subtle and crude hints about the upcoming landmark event, from The Simpsons to cult films.

Well, what conclusion did they draw? – But no. To anyone even in the eyes, but they are all God’s dew.

They will not pay attention to some egregious facts if they have to redo their cherished and harmonious picture of the world because of them? If the pieces of the puzzles do not fit into the benevolent concept developed over the years, we will throw them out. We will pretend that they are not.

Now this virus is crowned a King.

It turns out that it is also predicted more than once. Not as blatantly as 9/11, but there is something.

Forty years ago, Dean Kunz’s book Eyes of Darkness was published. Fiction, fiction, horror. One of the pages mentions biological weapons from China, specifically from Wuhan, which will destroy everyone. And it is called, although not directly into the coronavirus, not Covid-19, but no less clearly – ” Wuhan 400 “.

“They call the stuff ‘Wuhan-400’ because it was developed at their RDNA labs ourside of the city of Wuhan, and it was the 400th viable strain of man-made microorganisms created at that research center

… Wuhan-400 is the perfect weapon.It afflicts only human beings. No other living creature can carry it…. Like syphilis, Wuhan-400 cannot exist outside a living body for more than a minute, which means that it will not constantly pollute objects or entire places, like anthrax and other virulent microorganisms…. When the carrier dies, the Wuhan-400 inside it also perishes, as soon as the body temperature of the corpse drops below 30C…. the Chinese will be able to use Wuhan 400 to destroy a city or country, and then they will not need to carry out complex and costly decontamination before they come and seize power”

No matter what the book itself is about, we are interested in the following fact: how did Dean Koontz predicted witch such an accuracy, the place where the deadly pandemic would come from 40 years ago? Perhaps he knew something? Who whispered it to him?

The Internet in a panic, shoves amazed users with “revealing” articles stating that in the original edition of the 1981 book, instead of Chinese Wuhan, there was Russia! And the virus was called Gorki-400. However, when the book was reprinted in 2008, the author somehow corrected Russia with China. See, the plans of the elite have changed.

Whistleblowers also reassure agitated citizens that the symptoms described in the book are different from the current coronavirus. So, in the book of Koontz, the virus is 100% deadly, instantly contagious, but animals do not get sick, and it cannot exist outside the human body. And in real life, as we know, on the contrary, it was transmitted from animals to humans, is not fatal for everyone, and lives on the surface for a considerable time (data varies from several minutes to several days).
Well, you don’t expect a detailed description from the book, the author needs to somehow cover up the information that he received from somewhere. And the details of the plan were apparently refined over time. The writer, by the way, is alive and well.

An excerpt from Sylvia Browne, another author (died in 2013) circulates on the networks.

Medium, hypnotherapist, psychic. Organized and led the Nirvana Parapsychological Center. Famous for her predictions of the future.

“In around 2020, a serious pneumonia-like illness will spread throughout the globe attacking the lungs and bronchial tubes and resisting all known treatments. Almost more buffling than the illness itself will be the fact that it will disappear as quickly as it arrived, then attack again 10 years later, and then disappear completely.”

Interestingly, this prediction was made in 2008 as well as the reprint of Dean Koontz’s book.

Next, let’s go to the easy genre.

The Simpsons. Virus prediction in 2013. No, not a coronavirus, but in general. Well, in particular, the phrase “Ebola virus” will flash on the screen. As you know, the Ebola epidemic happened a year later, in 2014. But here we are interested in the methodology itself, demonstrated in the cartoon. How the virus is invented at a meeting of very important uncles, how they decide to choose as a carrier what almost everyone has in their house – cats . Cat flu! How the virus comes in a package from China to Japan. Here is a technology that conspiracy theorists know about, and normal people stubbornly deny.

The Simpsons series serves as a drain of information. What did they not “predict”, from Trump’s victory to 9/11?.

But in the French Asterix comic series (there is also an English version) for 2017, Coronavirus rises to its full height. This is the name of one of the characters. He wears a mask!

“Asterix is ​​a comic book series about the adventures of the Gallic warriors in the Roman Empire during the era of Julius Caesar. The current illustration, written by Thibaut Delay, was shown in the 37th edition of the comic book in 2017, showing a crusader in a mask named Coronavirus and his partner Bacillus (lat . from bacteria).”

Well, the shock bomb of our review –The cover of the journal Economist , which has a reputation for making charades with hints of the most important events of the coming year.

The sad panda between Trump and Putin symbolizes China. The word panda is also short for pandemia.

Xi Jinping is not visible. By the way, where is he? He has completely disappeared from the news.

A frail bunch of four horsemen of the Apocalypse appears a little lower and to the left of Putin: Pestilence, War, Hunger and Death.

“But the most interesting detail on the cover is the image of a strange animal that many took for an anteater. And only now it became clear that it was a pangolin . … whose appearance on the cover did not find any interpretation until February 7, 2020 , when the information was announced that the metagenomes of coronavirus pangolin and infected people are almost identical.”

In other words, this scaly strange beast that the Chinese eat as a treat is now officially named the cause of the transmission of coronavirus from animal to human.

The question is, how did the “economist” know? In 2018, there was no smell of any virus yet, not to mention this strange animal.

In addition to all of the above, there are the famous Illuminati game cards, a comic game of conspiracy theory, where all sorts of conspiracy horror stories are collected on separate cards. The game was created in the 80s, there were reprints and additional cards were issued.

By 1999, the set of cards had not changed. Conspirologists made a lot of noise that the game predicted the key moments of the September 11, 2001 attack, such as the explosion of the Twin Towers, and the blow to the Pentagon.

But we are interested in a card called Epidemic:

A mask, gloves, disinfectant, and in the background mountains of bodies packed in black body bags …

The epidemic was planned. Coronavirus, as a natural and accidental phenomenon that arose naturally in nature, does not exist. It did not pass on to man either from bats or from scaly moths.

It is either brought to the laboratory and introduced artificially, or something completely different is hidden under the veil of darkness.