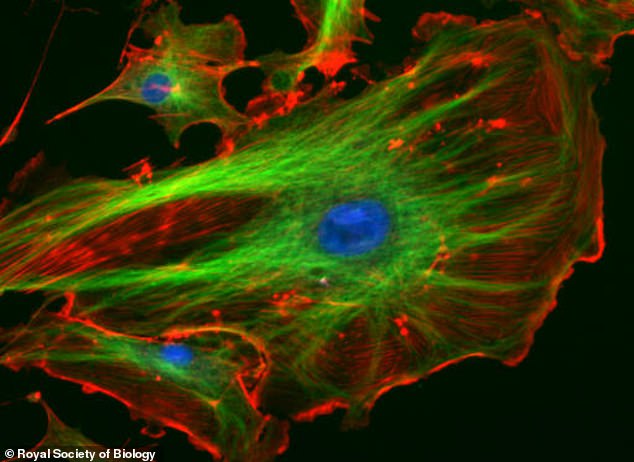 Future computers could be built smaller than ever before using the tiny biological skeletons that hold our cells together.

That’s according to one team of scientists, who have devised a way to make computer chips using cytoskeletons – protein scaffolds that give cells their shape.

They claim that the silicon chips that brought computers to the masses in the 1980s are soon to be a thing of the past.

Chips made using DNA have previously been built by scientists – but experts at the University of the West of England propose a different microscopic structure.

Cytokines are made up of protein structures that are just 25 nanometres wide – about half the length of a hepatitis virus.

Researcher say that computing signals could be sent over two proteins that make up cytokines: Actin and tubulin.

They transmit data across the cell using movements of atoms and electrons, and scientists could manipulate these signals to perform basic computations.

According to the team’s new theoretical model, the signals could be used to produce logic gates – one of the fundamental units of digital computers.

They say that cytoskeleton devices would have advantages over DNA chips because they are simpler and better at processing signals.

If developed, the chips could bring in a new age of computing in which chips are much smaller and more efficient.

They can also be built into a 3D structure, unlike their silicon counterparts, which must be laid flat.

This means cytoskeleton chips could be amassed into strings of millions of processors without taking up much room.

Researchers said that biological chips made with DNA or cytoskeletons stand to revolutionise supercomputing.

Currently, a single supercomputer consumes as much energy as thousands of households, said Professor Ross King, a researcher at the University of Manchester who was not involved in the study.

Using biological chips, ‘you can get orders of magnitude more into a small space,’ he told New Scientist.

‘You could have a desktop-sized supercomputer that used a fraction of the power.’

Advertisement. Scroll to continue reading.
In this article:Cytoskeletons, supercomputing