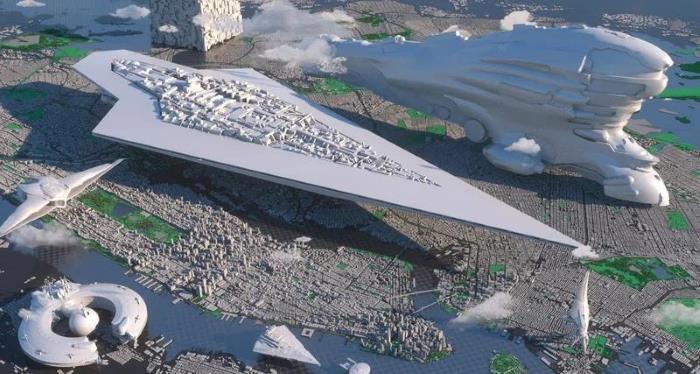 YouTube-channel MetaBallStudios posted a video, which graphically compares the fictional and the real spacecraft size. It turned out beautifully and bewitching.

Have you ever wanted to compare the size of an Imperial cruiser to the Enterprise from Star Trek? The YouTube channel MetaBallStudios did it for you, which clearly showed the dimensions of fictional and real spaceships.

At the beginning of the video, relatively small ships are shown – Serlin’s ship from Men in Black 2, only half a meter high, and a booth from Doctor Who. The dimensions are gradually increasing and now we see an imperial fighter with a height of 7.5 meters, and not far from it, the Dragon 2 SpaceX shuttle with a height of 8.1 meters. Gradually we move on to the heavier passenger ships – the Millennium Falcon and the Interplanetary Express Ship from Futurama.

The row continues and the 56.1 meter American Space Shuttle is followed by Interstellar’s Endurance. Then comes the ship Milano from Guardians of the Galaxy, followed by the Valkyrie from Avatar. The ISS follows with a small margin, the length of which is 109 meters. She is overtaken by Discovery One from 2001: A Space Odyssey.

Soon it comes to heavy artillery. Alongside the Star Trek USS Enterprise NCC-1701 sits the Avengers’ wheel-like Q-Ship of modern motorcycles. A little further, you can see the ship Hyperion from the Mass Effect universe, the Star Destroyer from Star Wars and the city of Atlantis from Stargate.

The next ships on the list already occupy a significant part of the Earth’s surface on which they are built. Among the monsters in the rating are both “Death Stars”, the city of Elysium from the movie of the same name and “Dreadnought” from the Destiny series of games. Closing the rating are the real giants – “Installation 00” from the Halo series of games, Dyson’s Orb from “Star Trek” and the Ring World from the novel of the same name. The diameter of the latter exceeds 300 million kilometers, according to the creators of the video. Happy viewing!

In this article:spacecraft sizes, starships