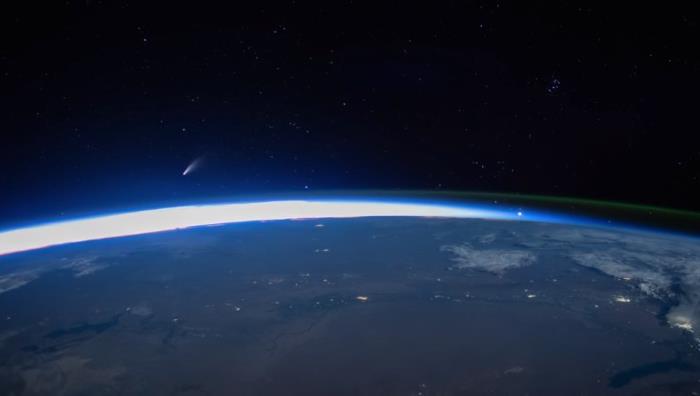 The video was created after combining 550 images taken from the International Space Station.

In the darkness of the orbital night of July 5, NASA astronaut Bob Benken clung to the porthole of the International Space Station in anticipation of an incredible sight. Soon, in the predawn sky above the Earth, the main object of observations of all amateur astronomers of this summer, Comet NEOWISE, appeared.

Benken and his colleagues with the ISS made hundreds of comet shots, which were then turned into a slow motion movie by British graphic designer Sean Doran, who regularly processes NASA shots.

“Take a cool drink, turn off the light, get more comfortable and place the video on the big screen,” Doran urged in the description of the video.

Initially, Doran shared a four-fold version of the video, but later uploaded the video in 4K. The video shows the passage of a comet in front of observers from the ISS in real time.

The sequence consists of 550 long exposure photographs taken in seven minutes. Usually this gives only 18 seconds of video, so Doran interpolated the images to fill the frames and smoothed the sequence for smooth playback.

Comet C / 2020 F3 was first discovered on March 27, 2020 using the NEOWISE telescope (The Near Earth Object Wide-field Infrared Survey Explorer), which gave it a second name.

Comet can be observed in the Northern Hemisphere from the equator to the 60th parallel of northern latitude. The best conditions for observations will develop around July 20, when NEOWISE enters the constellation Ursa Major with a brilliance of +3 magnitude.

At a minimum distance from the Earth, the comet will pass on July 23. It will be 0.692 astronomical units, or 103.52 million kilometers.

Advertisement. Scroll to continue reading.
In this article:Neowise comet