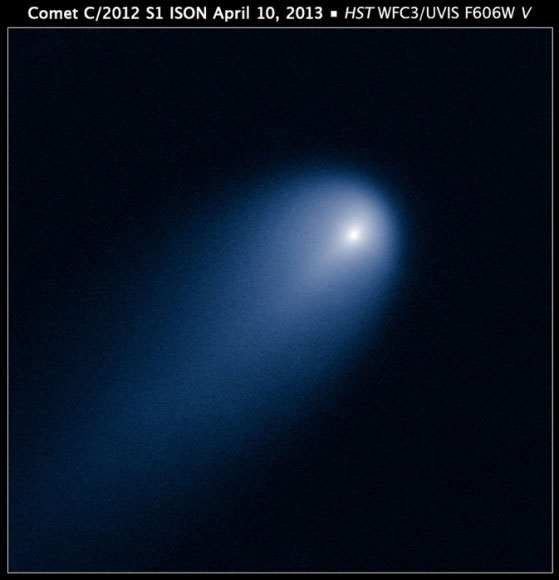 Comet ISON is coming!  ISON, considered the ‘Comet of the Century,’ is visible now in telescopes.  The object of much hype and speculation is currently traveling at speeds of more than two million miles per day.  In November and certainly by its closest approach around Christmas, ISON should be a grand spectacle in the skies without a telescope. 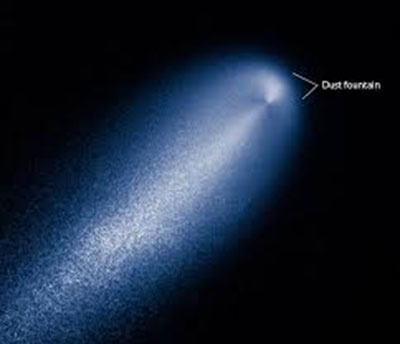 Russian astronomers Vitali Nevski and Artyom Novichonok discovered the object in September, 2012.  They named the ‘comet’ after their night-sky surveillance program; International Science Optical Network.  Above are NASA photos of the large nucleus estimated ‘1 to 10 km. in range.’

The object is passing Jupiter and yet we already see a pronounced tail ignited by the sun, many millions of miles away.  We have been disappointed in the past with Halley’s Comet and Kohoutek.  Astronomers hesitate on proclaiming any comet the Lightshow of the Century…yet, ISON’s brilliant dance around the sun could be beyond belief!

Astronomers have even predicted that the object will be visible IN THE DAY.  According to how well the object stays intact at closest approach, there is the remote possibility of viewing two suns in the sky!

With a little research on the Internet; on YouTube, etc. you will find the latest information on this supposedly NATURAL object as it approaches.  You will discover many people who sincerely believe this is NIBIRU, the so-called ‘10th Planet’ or ‘Planet X’ or ‘12th Planet.’  Does the large, incoming object have anything to do with the presumed Anunnaki as some believe?  Is ISON the winged planet?

Historically, comets have been known to be bad omens or harbingers of coming disasters.  [Comets may literally be pieces of exploded worlds which send the material in unnatural, elongated orbits.]  With ISON, you will find those who think this is the END OF TIMES and the fulfillment of a Doomsday Prediction.

Comet Hale-Bopp in 1996 was another oddity and made infamous by the ‘Heaven’s Gate’ (suicide) cult.  Thirty-nine members of the San Diego-based UFO group took their lives when Hale-Bopp was at its brightest.  They believed the Earth would be wiped clean and their souls will ride out on a spaceship that followed the comet.

According to the late Al Beliek (who knew Tesla, Einstein and was aboard the Philadelphia Experiment), Hale-Bopp was ‘aimed’ at the Earth and the companion object (ship) saved us from great disaster in 1996.  At the time, some people thought the object that followed the HB Comet was Nibiru.  If the HB companion object and ISON are both Nibiru…then, Nibiru really gets around!  Also, who knows what is going on and the meanings to celestial events that unfold before us?

ISON will be big.  Maybe…something significant will occur in the next months in our skies?  What will it mean?  What will it mean if ISON is NOT a comet and actually something else?  Is ISON artificial?  Is it behaving weird?  Is the ‘comet’ truthfully an incoming spaceship?  Let’s take a closer look… 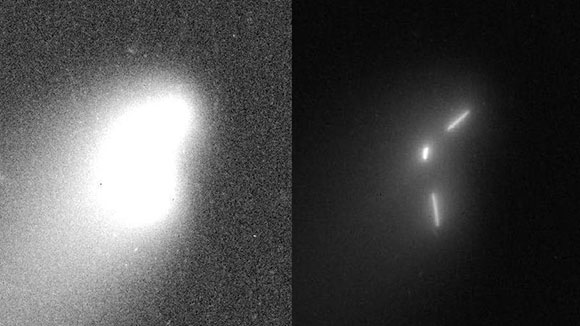 NASA was giving the public beautiful, colorful photographs of ISON until they discovered…when you DARKEN THE IMAGE, the comet was not a comet anymore!  NASA stopped producing images; strangely, precisely at a time when ISON’s lightshow would be coming into bloom.  This fact does not stop plenty of amateurs from sharpening the images and making them clearer.  What do your eyes tell you?  What kind of comet is three distinct pieces of such sharp clarity they resemble a UFO-type craft?

See for yourself.  Click on the YouTube links available here as well as keep informed with the latest information as it comes in.  Not television or news; but stream YT clips for underground data and possibilities.  The artificial object does resemble a winged planet.  ISON also appears like a spaceship out of Star Wars.  Why does an obviously unnatural object or craft follow the path of a natural comet? 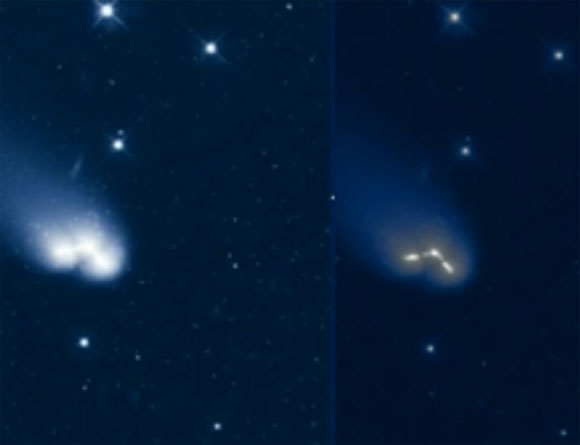 Why do we always run to FEAR; panic; preach Doomsday and scream the sky is falling!?  Ever hear of welcoming an unknown with open arms?  How about NOT placing a gun to a visitor’s head or heads?  Possibly, we remain outcasts or considered ‘low life forms’ in the Solar System because of our FEARS; because we react on negative emotions first…when we should put down our guns and think LOVE instead.  Maybe only then, will we be made aware of happenings outside of our small planet.

WATCH THE SKIES…follow the adventures of ISON; this incoming thing that is certainly not a ‘dirty snowball.’  Is it coming to pick a few people up?  Is it coming to teach our world?  We’ll soon know.  Why worry?  We have been saved from destruction a thousand times in the past.

Advertisement. Scroll to continue reading.
In this article:Comet ISON, Nibiru