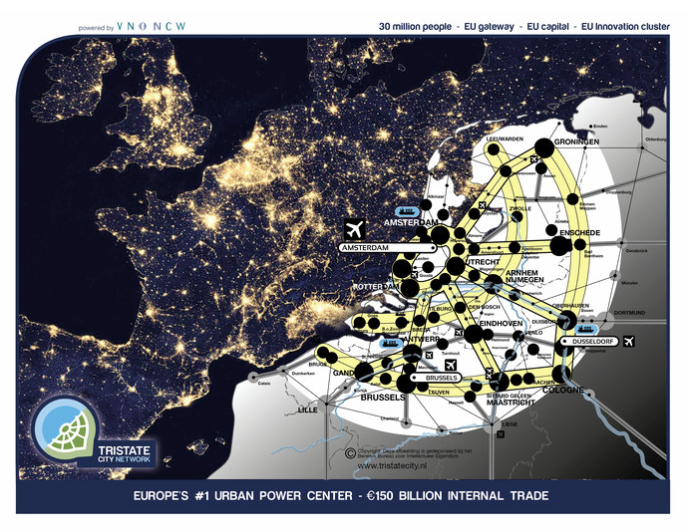 Over the past 10-15 years, the world has been introduced to dozens of ambitious projects for the cities of the future. So the Arab countries have focused on giant glass cities in the middle of the desert, the Japanese and Chinese are planning to build in the sea, and the Mexicans have decided to go underground and are already building the first 65-story underground skyscraper in Mexico City.

Against this background, old Europe with her beautiful, nevertheless, old collapsing facades looked somehow sad. However, it seems that the Europeans took up their minds and moved from plans to practice. We are talking about the project of the so-called Tristate City – a city that will completely absorb Netherlands, Belgium and a good piece of Germany. 45 million people will live there.

The project is not new, it is at least 10 years old, but this summer the Dutch and Belgians have already begun to drive farmers away from the land, whose fields were unsuccessfully in the city.

There are no detailed plans of the city ads yet, but, as far as one can understand from the discussion of projects, there will be, as it were, two half-rings of skyscrapers around a single center, and the gaps will be planted with trees, new channels will be dug and all that.

The project is now partly angrily discussed in the Dutch opposition press and in futurological publications, however, we, like other conspiracy theorists, are not so much interested in the details of the project as in its causes and consequences.

Tristate City will be the world’s first smart city – with smart things, electric judges, electric police, electric taxis, assembly lines where robots will work 99.99% and so on. That is, it will be the first town of the New and Marvelous World.

We are talking about a mega-project of some super-elites, whose personalities no one even knows. And since these people are investing in such a gigantic project as building a metropolis on the site of two and a half countries, it is obvious that they are not planning a nuclear war, there will be no strikes on Europe and everything in general is under control.

There is still no talk of the official start of construction of Tristate City, as long as the land is freed from farmers and this is denied in every possible way with the construction of the city. But when the city is officially proclaimed, they will experience the beauties of Collectivization on their own backs, at an accelerated pace!

In Davos, Rutte promised that the Netherlands will cooperate with the Universal change in nutrition – the “goals of sustainable development”.

They will have cities of the future! Concrete, iron and glass! Foreigners who will replace the role of former slaves. And aborigines who will be expelled from their native places in the name of Globalism!

The great thinkers of the EU did not learn from history, did not understand that this leads to ruin.

Advertisement. Scroll to continue reading.
In this article:Collectivization, Tristate city