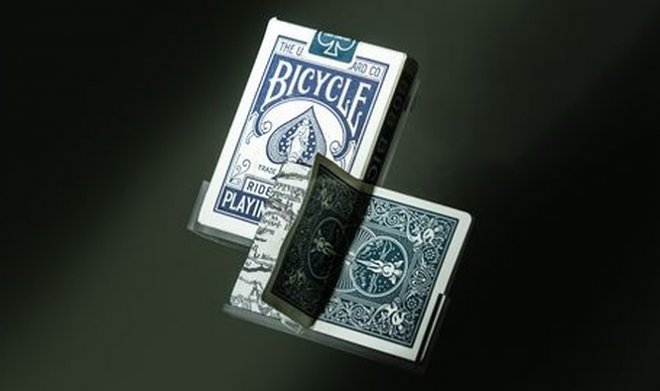 In 1944, a prison was set up in the ancient Saxon castle of Colditz, where the most desperate British and American prisoners of war were gathered. They were carefully guarded, as prone to escape, but here’s the paradox – soon after receiving Christmas gifts from the Red Cross mission, 32 prisoners successfully escaped from the castle one after another. In total, over 300 prisoners escaped throughout Germany that winter, and the secret of their luck was kept secret for another 30 years.

Air superiority by 1944 had become a decisive factor in the war, experienced pilots were worth their weight in gold, so they tried to rescue them from captivity by any means. Before the flight, the pilots received a message: “If you are taken prisoner, the gifts from home will be kept in secret.” UK MI9 and US MIS-X have contracted The Playing Card Company and Bicycle to create a special version of gift playing cards. Old-timers recall that it was the most exciting project of their time.

Having received a present for Christmas, the prisoners of war looked for decks with an oblique line on the packaging. After wetting the top layer, they opened the container map, taking out instructions, diagrams and maps of the area. They started with a joker, which was placed in the upper left corner, then substituted all spades, then diamonds, clubs and hearts. It turned out to be something like a puzzle, which, after being assembled, turned into a detailed map of the area with valuable instructions for organizing an escape.

For each prison or camp with prisoners, separate sets of cards were made. In the case of Castle Colditz, an order was given to cross the border with Switzerland in the canton of Schaffhausen, but under no circumstances to appear near Lake Constance.

When driving from Waldshut to Ravensburg, it was necessary to adhere to a power line with seven wires on 20-meter steel poles. It was necessary to move along the banks of the rivers, avoiding crossing the fields and going out to observation platforms.

Since the entire project was a gross violation of the Geneva Convention, the special services kept it secret even from the military themselves. The British indicated on the packages of Christmas gifts the outgoing addresses of buildings completely destroyed by German bombing.

The Americans sent their sets of maps from forestries and from the mailboxes of environmental services. The veil of secrecy continued after the war, as long as the main organizers and performers were still alive. It was only in the 1970s that the CIA recognized the existence of this project.

The incident with the escape of 32 prisoners of war from the Colditz castle was the most famous result of the use of cards with a secret, but the veterans of the special services themselves do not know how many attempts to escape from German prisons were.

To confuse the guards, hundreds, if not thousands, of decks of ordinary playing cards were printed and given to prisoners. Many were of poor quality and were quick to jump to justify the transfer of new decks. There is no official information on this matter.

The International Espionage Museum, located in Washington, DC, today displays the last surviving deck of such cards. It has been sealed for 76 years, but next to it is an open six of clubs with a secret inside.

In 2013, the Bicycle company released a souvenir version of the cards, which completely repeat the old design, but there is no need to open them – the secret content is openly printed on the front of the card. And you can personally try to feel like a prisoner who builds a plan to escape from Colditz Castle .