Exorcism is going multi-denominational. Where once those competing for the souls of followers would burn each other as heretics and spur decades-long wars, different Christian denominations are now rallying together to battle a resurrected threat.

And that’s no less than Satan himself.

The Roman Catholic Church has for the first time opened up its annual exorcism class in Rome to representatives of all major Christian faiths. The Pontifical University of Regina Apostolorum is a Vatican-affiliated university in Rome has been conducting the increasingly popular annual exorcism conventions for Catholic priests for the past 14 years.

But now the doors of the 14th Exorcism and Prayer of Liberation Course has been thrown open to groups once considered heretical and demon-infested only a few short centuries ago.

Now some 250 Catholics, Lutherans, Greek Orthodox and Protestant priests have assembled to arm themselves with the sword of the holy word to battle Satan amid the souls of their parishioners.

It is itself a dark art, born of a dark age.

The Catholic Church, however, insists demonic possession is on the rise.

In 2014, it formally recognised the ancient ritual of exorcism under Canon Law at gave official approval to the formal creation of the International Association of Exorcists.

It blames the secularisation of society (separation of religion and state) along with the increasing popularity of competing religions, tarot readings, astrology, the internet and atheism for opening the demonic floodgates.

And the best way to fix this, it believes, is to tackle the ‘possessed’ head-on. 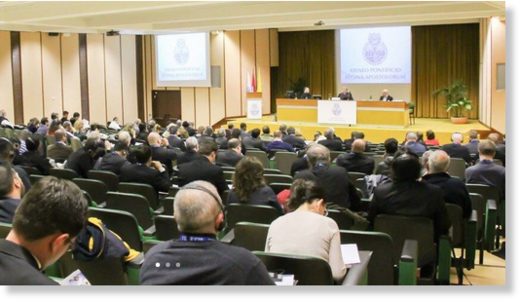 Sword of the Spirit

“We are called to fight against the Devil with all our might and determination,” keynote speaker and Catholic priest Jose Enrique Oyarzun addressed the assembled exorcists in Rome.

In this enlightened age, the practice sounds odd to many.

And that’s the problem, exorcists insist.

While there is rarely evidence beyond the anecdotal, exorcism practitioners insist their behind-closed doors experiences are very real.

And it’s a threat Pope Francis himself has been keen to highlight, making regular references to the power of the Devil in his sermons.

“He is evil, he’s not like mist. He’s not a diffuse thing, he is a person. I’m convinced that one must never converse with Satan – if you do that, you’ll be lost,” the Pope recently told a Catholic news service.

Now, the Pope has a spiritual army of his own at his command.

The International Association of Exorcists counts some 400 priests among its members worldwide. And the death of its most famous demon hunter, Father Gabriele Amorth, in 2016 served only to inspire a surge of fresh applications.

But they’re not enough.

So the Catholic Church is seeking a source of fresh recruits. 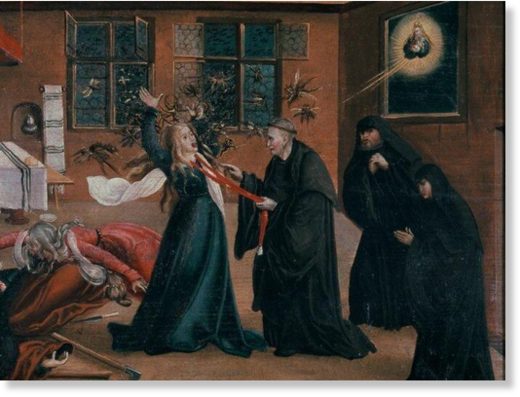 A depiction of an exorcism from the Middle Ages.

When it comes to skewering Satan, there are problems of doctrine.

Not all the Christian faiths believe the same things. And they’ve put each other to the torch and started wars over such serious matters in the past.

“This is the first time that different denominations have come together to compare their experiences on exorcisms,” Spanish priest and theologian Pedro Barrajon, one of the convention’s organisers, told media in Rome.

“The idea is to help each other, to establish best practices if you will. The Catholic Church is most associated with exorcisms because of films like The Exorcist and The Rite, but we are not the only church that performs them. Expelling the devil goes back to the earliest origins of the Christian Church.”

Its education ministry this year offered its teachers the option of attending an intensive 40-hour “exorcism and prayers of liberation” crash-course as a sideline to the convention in Rome. At the cost of 400 euros ($A640) each, every attending teacher was promised to be taught how the ancient rite should be “correctly practiced”.

The move attracted ire from the Italian opposition parties who insisted the education system had more to worry about than training teachers in magic.

“With all the problems in Italian schools, the ministry is trying to bring back the Dark Ages,” opposition, centre-Left MP said Laura Boldrini said.

“Schools need to prepare young people for the challenges of the future. And what does the education minister do? He promotes exorcism courses. (Meanwhile) schools are not safe, gyms are not fit to be used and teachers are not properly paid.” 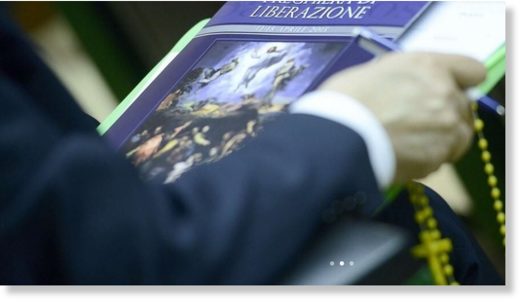 Father Barrajon, 61, told the conference in Rome that non-Catholic denominations were less structured in their exorcism rituals. “Some of the other churches are more creative, they don’t use a precise format,” he said.

And that could present a problem: perhaps any harpies inhabiting a human body won’t be entirely evicted.

Which is why they want priests to attend demonology school.

Participants attending the conservative Legionaries of Christ religious order run university study such subjects as “The Symbology of Occult and Satanic Rituals” and “Angels and Demons in the Sacred Scripture”.

The need to get it right, according to the exorcists, is pressing.

Last year, exorcist Benigno Palilla told Vatican Radio that there were some 500,000 cases of possession appearing in Italy each year.

But there are rising concerns about the validity of the priestly practice.

Some faith healers have been accused of sexually molesting their possessed patients.

One case in Palermo saw a priest and soldier arrested after using the pretext of “expelling demons’ to touch the genitalia of women.

In another Italian case, an underage girl was sexually abused by a 69-year-old practitioner, her boyfriend and her mother. “He convinced the girl she was the victim of strong ‘negative forces’ and consequently convinced her to undergo ‘purification rites’ consisting of sexual intercourse, sometimes in a group,” Italian police said at the time.

Pope Francis said shortly before the convention that priests entrusted with the “delicate and necessary ministry” of being an exorcist must be chosen with “great care and great prudence.”

The broader Catholic Church admits to being dubious about most claims of possession.

Its officers publicly state the majority of such claimants are, in fact, mentally ill. Instead of priests, they should be seeking medical attention to address physical health issues.

But Pope Francis has recently adopted a more urgent tone.

In March, he reportedly told a group of priests they “should not hesitate’ to refer confession-box cases of possession to an exorcist.

“They could also have spiritual disturbances, whose nature should be submitted to careful discernment,” Pope Francis said, “taking into account all the existential, ecclesial, natural and supernatural circumstances.”

The exorcism convention, however, concedes there may be complicating medical issues at hand and included talks on medical psychology, criminology, pedophilia and pornography.

Pope Francis himself has acknowledge that “epilepsy, for example, could easily be confused with demonic possession”.

But this, he wrote, should not lead to the conclusion “that all the cases related in the Gospel had to do with psychological disorders and hence that the devil does not exist or is not at work.”

So the worldwide Catholic Church continues to leave open the possibility that what its followers perceive to be Satanic possession may be the real supernatural deal.

During last year’s exorcism convention, Cardinal Ernest Simoni insisted Satan’s touch was unmistakeable. He had himself witnessed possession, he said.

“It’s important to differentiate between psychopathic illnesses, neurasthenia, pathologies,” the Cardinal said during a keynote address. “Satan you can recognize.”

In this article:exorcism, Roman Catholic Church