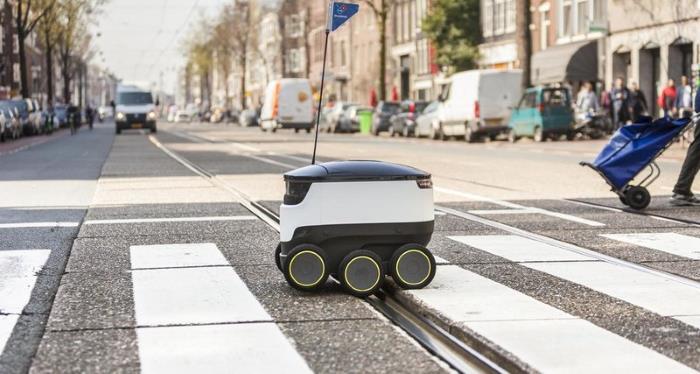 Robots are used in China to deliver food to people infected with coronavirus. The task does not include the actual feeding, it just brings food to the door.

A short video shows a robot courier travelling along a hotel-like corridor. On a special tray there are packages with food. The robot pronounces messages in Chinese. People go out of the doors to the corridor and take packages from the tray. Meanwhile, the coronavirus epidemic continues to expand. According to official sources, the total number of deaths from pneumonia in the PRC has surpassed 100.

“The disease is quite dangerous, the number of cases is growing exponentially. The coefficient of geometric progression, which is fixed at the expense of China, if it continues for another month, then the disease can develop into a global epidemic”

The Chinese authorities closed the city of Wuhan in quarantine, and this closure is carried out very radically – by building earthen embankments across the roads.

Not everyone likes quarantine measures. Wuhan Mayor Zhou Xianwan declared on Monday that he is ready to resign if his decisions and measures to close the city in order to prevent the further spread of a new type of coronavirus cause discontent among the population.

In an interview with Central Television of China, he said that speaking about the decision of the authorities to close such a large city, many say that this has not happened in history.

Meanwhile, scientists have created a dashboard showing the spread of Chinese coronavirus in the world in real time. Data is entered from confirmed sources – this will help fight misinformation.

At the beginning of the epidemic, local authorities apparently believed that the situation could easily be brought under control, and sought to prevent the spread of rumors about the disease. Several arrests are known for allegedly “publishing or sending false information on the Internet without verification”, and journalists reported threats and delays after reporting the virus.

As often happens, the result is the opposite. Due to the lack of intelligible information, people tend to panic and saturate the information vacuum on their own. False data can quickly spread: online scare stories about “infected bananas” are already in full swing.

Researchers at Johns Hopkins University have used data from the Centers for Disease Control and Prevention and the World Health Organization to map the spread of the disease. As a result, they developed a dynamic map, according to which you can monitor the distribution of 2019-nCov around the world.

As reports become available, the map is updated, tracking the total number of confirmed cases, the number of deaths and patients who have recovered. Each red dot is a focus of the disease, the size of which corresponds to the relative size of the outbreak. If you click on it, you can see information on the corresponding region.

We keep following the developments.