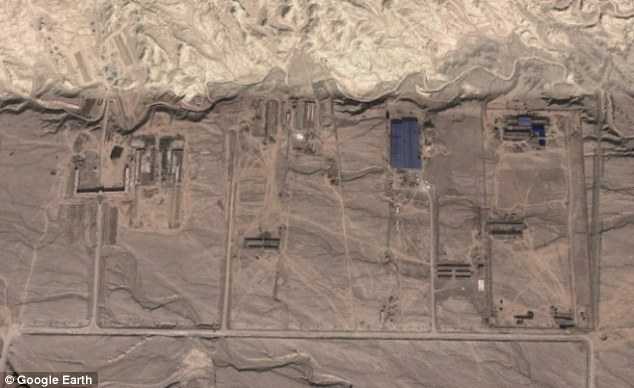 What appears to be a collection of structures and roads have baffled the expert who has been left puzzling what they might be.
On the map: The complex of roads and large buildings in the middle of the desert in south China to which there appears to be no explanation
‘I haven’t the faintest clue what it might be,’ he told Wired magazine.

‘But it’s extensive, the structures are pretty big and funny-looking, and it went up in what I’d call an incredible hurry.’
One for the album, Eric? Google boss stops to take a picture of computers in North Korea during mystery trip
The ghosts of Hitler’s European fortress: Photographer captures images of decaying World War Two bunkers in Holland, France and Belgium
Tunnelling into history: Amazing images show London houses being demolished to make way for the Tube in 1863, the world’s first underground railway
Mr Thompson, who left the CIA in 1985, has discovered similarly strange things on Google Earth before, such as the giant jigsaw grids in China in 2011 which appeared to be satellite calibrator grids.