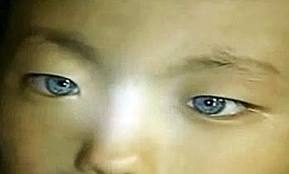 A young Chinese boy who was born with beaming blue eyes has stunned medics with his ability to see in pitch black darkness. 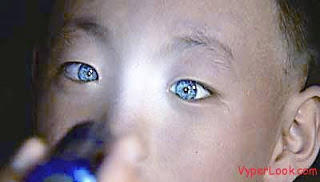 Nong Yousui from Dahua, China has eyes that reflect neon green when light is shined on them. Doctors have studied Nong’s amazing eyesight since his dad took him to hospital concerned over his bright blue eyes.

“They told me he would grow out of it and that his eyes would stop glowing and turn black like most Chinese people but they never did”, his Dad said.

Nong enjoys playing outside with his schoolmates but experiences discomfort when in bright sunlight, however can see completely clearly in pure darkness.

To test his abilities, a Chinese journalist prepared a set of questionnaires which he was able to finish while sitting in a pitch black room. The tests show Nong can read and write perfectly without any light and can see as clearly as most people do during the day.

According to the World Record Academy (the leading international organization which certify world records), Nong has even set the world record for the first human who can see in the dark.

In animals, night vision is made possible by the existence of a thin layer of cells, called the tapetum lucidum. And like a Siamese cat, Nong’s sky-blue eyes flash neon green when illuminated by a flashlight.

Nong’s night vision has sparked interest around the world by vision scientists, evolutionary biologists, and genetic engineers. And this is good news for science as we may eventually be able to use genetic technologies to deliberately create such a condition ourselves.

A new and growing generation of extraordinary and gifted children are springing up across our planet.