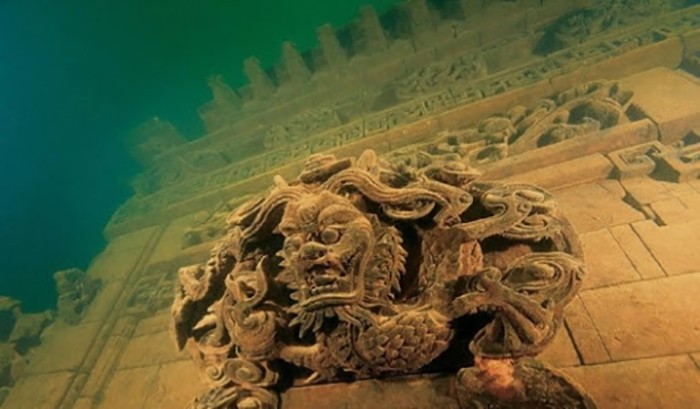 Zhejiang China is proud of its amazing beauty by Qiandaohu Lake or the Lake of a Thousand Islands. This amazing place, unlike many others, was created by the hands of man and only 60 years ago. The fact is that a valley 150 km from Hangzhou was deliberately flooded – during the construction of a hydroelectric power station, which was supposed to meet the growing needs of the city. Under the water were two ancient cities, becoming a kind of Chinese Atlantis and preserving their secrets forever.

In place of the flooded valley, a man-made lake appeared. It has very pure water, which is used to produce bottled mineral water of the Nongfu Spring brand. The islands on the lake are covered with very beautiful dense forests and have already become a popular tourist destination, because each island is “dedicated” to one topic – there is “Island of childhood” and “Island of birds”, “Island of snakes” and “Island of castles”, there is also “Island of monkeys””.

The once proud ancient city of Leo.

In 2002, in the depths of the lake, divers discovered two beautiful cities of antiquity, flooded with the valley in 1959: Shi Chen and Hye Chen. Once they stood near the foot of the Five Lions Mountain (Wu Shi). It is known that the history of the city of Shi Chen goes back centuries to almost a millennium. In 621, when the Tang Dynasty ruled China, a city was built that became the powerful political and cultural center of the province.

The city of Hye Chen – the “elder brother” of Shi Chen: it was founded in 208 AD by the Xinjiang River, became the center of business life when the Han Dynasty ruled China

As already mentioned, both cities and the entire valley were flooded by the Chinese government in 1959 during the construction of a hydroelectric power station. Together with the ancient cities, another 30 modern cities, almost a thousand villages and many thousands of hectares of agricultural land went under water.

Artistic reconstruction of the city of Sichen

But the families that lived for centuries in the valley were resettled – almost 300 thousand people. And for 40 years no one remembered the ancient history of the flooded valley. So far, tourism officials have not begun to look for opportunities to attract tourists to these magnificent places. The head of the local tourism business hired divers to find out what is hidden in the waters of the man-made lake.

Divers found that the ancient city was almost untouched by time.

In 2001, the first dives were completed. And they immediately brought interesting findings. The outer wall of the ancient city was discovered. So the Chinese government learned that the city of Shi Chen is intact.

The city was not just intact – it practically did not suffer for 40 years, even wooden stairs and beams have been preserved. Fresh water has proven to be an excellent preservative. Research continued for 10 years – in 2011, finally, the ancient flooded cities were called important historical relics. The National Geographic magazine has splendid shots of Chinese Atlantis, which is like a beautiful underwater tale.

Many secrets are kept by this flooded beauty.

And again, local authorities started talking about the fact that the valley and ancient cities need to be opened for tourists. To do this, they ordered and made a submarine pleasure boat. But almost immediately it became clear that this boat could create powerful underwater disturbances that would threaten the preservation of antiquities.

Sometimes it even looks creepy.

There were other proposals: for example, it was proposed to build protective walls under water and gradually pump water from cities. But this would be an extremely expensive technique, in addition, threatening the destruction of ancient structures due to pressure drops. Most experts believe that the best solution today is to do nothing, because the technology is still far from perfect and human intervention threatens with unknown consequences.

Local authorities propose banning sailing in order to save the city.

The authorities, of course, intend to preserve historical sights, but so far they do not see a sufficiently technological solution in this situation.

The lake proved to be a great place to store ancient buildings.

In addition, it’s worth raising at least a small part of the ancient treasures from the water, as they immediately begin to collapse – it turns out that water for ancient cities turned out to be an excellent preservative. True, water can also destroy Zhi Chen – any powerful water currents will be detrimental to the thin walls of structures.

The underwater city keeps its secrets.

In order to preserve the ancient relics, the authorities plan a number of measures: a ban on sailing and fishing on the lake, even the extraction of sand on the banks of Qiandaohu. Archaeologists around the world agree with such measures – because this will not only preserve relics, but also help to “open a window” in the history of China.

Now, on the lake and in the flooded cities, there is a real pilgrimage of divers – the only ones who can lively contemplate the beauty of the lake.

The city of Shichen has become a real mecca for divers.

New projects are being developed to make the flooded ancient Shi Chen accessible to tourists. For example, the “Archimedes bridge” – i.e. subway tunnel. But now the development is at the research stage and the mysterious underwater world of flooded cities is available only to the elite.

The ancient city is not accessible for tourists.

In this article:Chinese Atlantis, flooded city of Shicheng