China began its longest manned space mission yet Tuesday with the launch of the Shenzhou-10, state television showed, as the country steps up an ambitious exploration programme symbolising its growing power.

The rocket ascended above the Jiuquan space centre in the Gobi Desert exactly on time at 0938 GMT, trailing a vast column of flame.
The three astronauts on board — who include Wang Yaping, 33, China’s second woman in space — saluted cameras mounted inside their capsule.
A few minutes after launch the boosters detached from the rockets, and a little later the solar panels of the Shenzhou-10 — the name means “Divine Vessel” — were deployed, to applause from mission control.
“The vessel is already in orbit,” said Zhang Youxia, the manned space programme’s chief commander. “I now announce the launch was a great success.”
The crew are due to spend 15 days in orbit, in a mission that is a crucial step towards China’s goal of building a full space station capable of housing astronauts for extended periods.
President Xi Jinping, fresh from a summit with US President Barack Obama, was on hand to watch the departure. 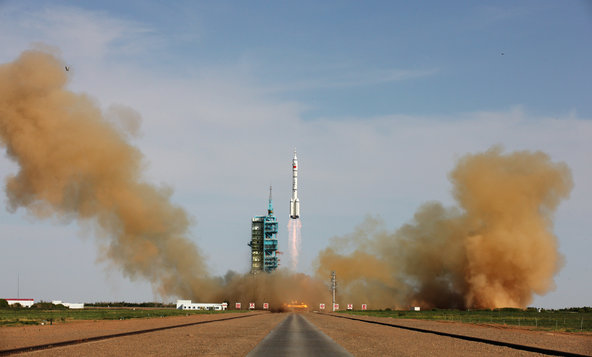 Beijing sees the multi-billion-dollar space programme as a marker of its rising global stature and mounting technical expertise, as well as the ruling Communist Party’s success in turning around the fortunes of the once poverty-stricken nation.
[…]

Read the full article at: spacedaily.com

In this article:China, mission, Space