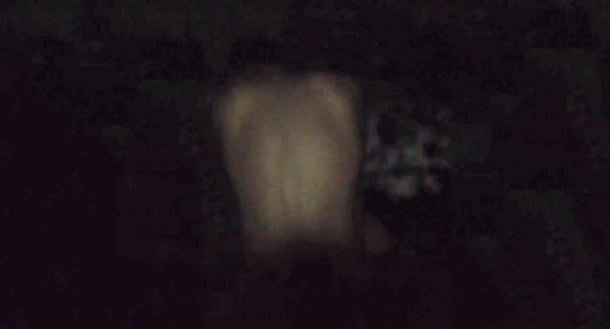 Ok, so we were working in a old house near an unused prison (i know, cliche right but seriously not that scary, search vernongate derby if you wish to). We have heard lots of banging ever since we started the job and seeing as the next door neighbours were having work done at the same time we thought it was them.

Anyway one day the vans that were outside the neighbours house weren’t there and we could still hear banging. (didnt even realise this until we spoke about it after). On our dinner break we decided it would be a great idea to make a video of us (well my friend) venturing into the cellar, or basement for the Americans. My friend is the one filming it.

Now he is ALWAYS playing practical jokes on people, but when he came running up the stairs he was white as a ghost. All he did when he stopped filming was replay this video and showed me too.

We were told at a later date aswell that the builder we were working for got the house at a cheaper rate as the guy who lived there last, had lived there all his life and died there, that the house was used as some sort of outhouse or residents for the prison nurses (something along those lines anyway). Also the builder had also mentioned that he was certain he turned the lights off at night when he left, and on 3 or 4 occasions came into the lights being on in the morning.

• We were the ONLY ones working in the house. • footage was filmed on phone on portrait so sorry for the bad sizing (  if anyone knows how to make it better let me know 🙂   ) • Damn this freaked me out.

Ask away if you want to know anything else. Otherwise please explain what the f* this is please