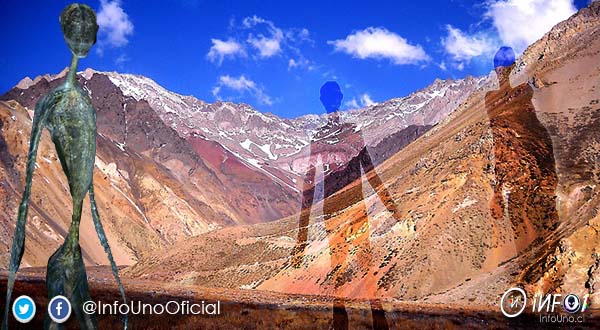 We have all asked ourselves if we will be alone on this planet, or if beings from other places far away from the earth are visiting us.

Despite the efforts of science, we still do not have tangible evidence that we can all appreciate and demonstrate that there is a life similar to ours outside. This is why it becomes so interesting to hear testimonials from people who have had some contact with beings from other planet.

Despite the efforts of science, we still do not have tangible evidence that we can all appreciate and demonstrate that there is a life similar to ours outside. This is why it becomes so interesting to hear testimonials from people who have had some contact with beings from other planet.

This is the point we are interested in touching today, telling an experience about a contact of the third type of a Chilean Family.

We contacted Eric Martinez, a researcher at CIFAE, an organization dedicated to the investigation of this type of phenomena, in order to take this case to you.

Many will believe that having this type of contacts is a great experience, but no, this time it was not or at least this is what the witnesses say.

RESEARCH CIFAE THE SIGHTING OF LIGHTS AND BEINGS IN THE PACKING THE PLASTER.

The El Yeso reservoir is a reservoir located in the Andes mountain range at an altitude of 2,500 meters, in the municipality of San José de Maipo, Cordillera Province, Santiago Metropolitan Region, Chile.

November 1, 2018 would be a day not to forget for a family who decided to camp in the El Yeso Reservoir sector.

The worst night of their lives is this is how they remember it, the family composed of 2 children, Bastián of 15 and Catalina of 5 years, would have initially observed two lights that according to their perception seemed to come along the road, a strange white light and another yellow, to what they thought it was possibly was some type of vehicle that went to the place, but something that caught my attention was the color of the lights.

From one moment to the other the two lights were separated, one advance to the other, within their logic they would have ruled out that the lights were of a vehicle for which they thought they were motorcycles, however they still had some doubt about the other yellow light.

This is where it all begins, from this moment this family would witness a third type contact.

The lights approached where the family were camping, one of them stopped about 60 to 80 meters away. It is here that the white light happened to be 2 lights reaching a total of 3 lights with the yellow one, they comment that one of them flashed.

When these lights were in place, next to them suddenly appear 5 humanoid figures, two of them were about three meters tall very thin with very long arms and legs as well as his neck.

Another being had a medium height while the other 2 were shorter.

They say that the highest beings with unusual speed disappeared from where they were (from the right and left of the other beings) only the other 3 remained.

Subsequently the lights disappeared behind a hill leaving part of the sector illuminated. Later, another white light appeared on the west side, which after a few minutes began to change colors, and to the surprise a second white light would also come out.

They commented that before the appearance of the lights they were inside the tent trying to sleep. This was difficult for them because it was hailstorm and there was a strong wind in the place.

Apart from the wind and hail, they were disturbed by a light that illuminated their tent from the outside. As witnesses explained to CIFAE, that light illuminated them at times at the level of the tent floor, and at other times it illuminated from above. They never knew what this insistent light was about, since they couldn’t open the tent because of the prevailing weather …

It must be said that that night it hailed intensely and the wind hit very hard to the extent that they could not resist anymore and left the tent taking their two children to the car to protect them. Once the car begins the odyssey for the family. The terror of the experience shows in their faces when they narrate what happened, to say Bastian, 15, who saw everything …

CIFAE is investigating the case, they have recorded testimonies and will make them public very soon.

We leave below the drawing that Bastián made and that was contributed to CIFAE with the authorization of his parents. The drawing would show the supposed physical conformation of the beings that were seen by the family.

No doubt an incredible testimony a spectacular case that needs to be investigated.

Advertisement. Scroll to continue reading.
In this article:alien contacts, CIFAE