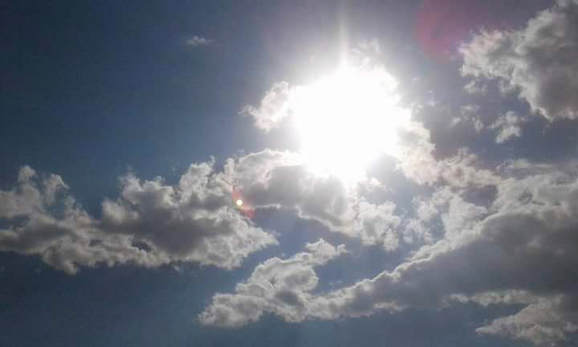 ​UFO encounters may be frightening as witnesses observe never-before-seen objects moving in incredible ways. But some sightings are further stressed when the object morphs into different shapes.

A New Mexico witness at Albuquerque reported watching a boomerang-shaped object just 500 feet away that hovered and seemed to change shape while moving, according to testimony in Case 82456.

“A light gray shape caught my eye,” the witness stated. “The object was approximately 500 feet away, and about 50 feet in the air over a building. At first, I thought it was a flock of birds, and I said, ‘That’s interesting. What kind of birds would those be?’ It seemed to be moving east in a slow flutter. Then it disappeared, like it folded back into the sky.”

The witness thought that was strange.

“It then reappeared in a fat boomerang shape. It seemed to be made up of multiple light gray, possibly reflective objects, but working together, like a school of fish, or sequins on a purse or dress. It did seem to have a common background that was dark gray or black. It was still fluttering, but it paused and hovered and moved backward, just slightly.”

At this point, a bare tree blocked the view, but the witness kept walking to see the object again.

“When I saw the shape again, it had changed. And it seemed to be a soft, billowy, upside down parachute shape, or the bottom of a puffy cloud or a puff of factory smoke. I almost convinced myself it was a deflated weather balloon, but there was no top to the shape, only a distinct bottom. The color of this object seemed to blend with the sky. I could only decipher a dark gray sitting in the bottom of the cloud/parachute.”

Then the object changed again.

“Now it became almost transparent, as if the sun were reflecting on an invisible craft. Now there really is no overall shape that I can make out. I saw a few smaller, very rigid shapes, like flat prisms or solar panels, and they seemed to fold backwards into the object and then the whole object faded away.”

The witness said these events occurred in about 20 – 25 seconds.

An Idaho witness at Idaho Falls reported UFO sightings over a period of time, including a “huge, camouflaged triangle,” according to testimony in Case 88223.

“I’ve seen quite a few UFOs and think I’ve been possible visited,” the witness stated. “A saucer, a huge, camouflaged triangle, a huge white orb covered the moon and moved across the sky, an orange orb in my backyard and more. All in Idaho Falls area. People just don’t look up.”

A Fort Rucker pilot reported watching an “oddly-shaped, circular object” hovering over the Alabama army base, according to testimony from Case 84970.

The witness had just finished morning PT (Physical Training) and was standing around talking to two other friends before heading home at 6:45 a.m. on June 15, 2017.

“It was a warm morning with partly cloudy skies,” the witness stated. “The sun was just starting to peak over the buildings around us and was quickly starting to warm the day. At approximately 6:45 am, I observed a UH-60 (Blackhawk) helicopter flying above the tree line approximately a mile from my current location. This is a pretty typical sight as Fort Rucker is home to initial Army flight training.”

As the witness looked up to watch the Blackhawk helicopter, another object was noticed hovering approximately a thousand feet or so above the tree line.

“From my line of sight, the Blackhawk was passing under the object but was much closer to me then the object appeared to be. From where I was standing the object was rather small but taking into consideration the altitude and distance from my location, it had to have been no smaller than the size of an average car. The object omitted a light similar to a star but was not as bright. You could also tell that the object’s color was most likely white or a dull-like color. We knew this was no star because it was below the clouds and appeared to be much closer. The longer we watched it, the less it seemed to have a definitive shape. It appeared to be shifting shapes kind of like a ball of liquid would behave. Almost like a pulsating type behavior.”

None of the three observers could identify the object.

A Missouri witness at Gladstone reported watching a shapeshifting, black craft moving along at the three top level, according to testimony in Case 85100.

“I saw bright lights just under the low-lying clouds as a storm was blowing in,” the witness stated. “They caught my attention as they looked quite low to the ground. I observed two amber lights on each side with a brighter, larger white light in the middle. As we moved forward, my view was obstructed by trees, so I sped up slightly to better my view. The lights had disappeared, but as I scanned the sky looking for them, I noticed a large black object moving slowly directly in front and above my vehicle.”

The witness shouted to her son and pointed in the direction of the object.

“We witnessed the object as it crossed above the road, heading northwest, at the closest point to us being about 20 feet above. We pulled into the parking lot of the elementary school and watched the craft fold in on itself, changing from a black, sphere-like object, to a squared shape, then into a large, disc-shaped craft. It ascended above the tree tops and took up into the clouds. We continued to watch as many as 20-plus sparkling, amber colored lights appear through the clouds exactly where the craft had disappeared. We watched in awe until all the smaller, twinkling lights disappeared.”

Advertisement. Scroll to continue reading.
In this article:MUFON, shape-shifting UFO's