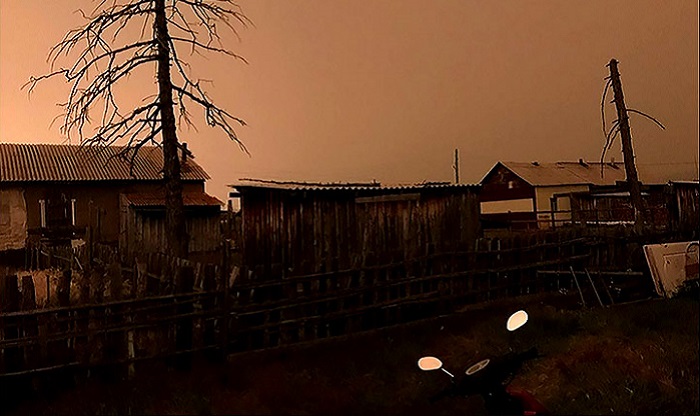 Sudden night on a clear day – what is this strange phenomenon? Is it natural or artificially created? Is someone “outside” playing with the atmosphere of our planet or do we not fully understand how its ecosystem works?

Imagine a clear sunny day, everything is normal, and you do your daily activities. Suddenly, the sunlight disappears and everything around sinks into darkness.

But, there are no obvious reasons for this, there are no astronomical phenomena, solar eclipses, technological factors and more. It’s just dark for a few hours, as if they turned off the lights.

There are several such strange cases in history. Below we describe the most famous of them.

The Dark Day in New England

May 19, 1780, in the New England area, USA, starts like any ordinary day. People were busy with their daily activities and children playing around.

But, at about 10 o’clock in the morning, strange things began to happen. The sun was suddenly covered with a reddish mist and slowly began to fade until it became a barely visible flickering light. The sky became very dark as at night.

This dark veil appeared over Portland, Maine, south of New Jersey and north of Canada. It may have covered more territories, but no such incident was reported since few people lived there.

Immediately after dark, all the animals began to behave as if night had come. The frogs began to howl at night, and the chickens entered the chicken coop and settled down for the night. Flowers turned their petals down, and confused people crowded the streets, gazed out into the dark sky and understood nothing.

The darkness was so unusual that even the stars and the moon could not be seen in the dark sky.

“We were in New Jersey when the” dark day “came. People later said it wasn’t as dark as it was in New England. I don’t know what was going on, but the chickens went away immediately, and people started burning candles in their houses. “

This event caused a wave of panic and unrest among people, including talk of the approaching Apocalypse. The religious people who believed in them went to churches and read prayers.

All this was fueled by a lack of information. There were no telephones or other technological means of communication, and contacts between the regions were maintained mainly by postal transport. Because of this, many people believed that not only their cities, but the entire world was immersed in darkness and would never see the sun again.

Darkness was over New England for more than 14 hours, and it was not until nightfall on May 20 that the sky began to clear and the moon and stars became visible. In the morning, the sun rose in the sky as usual.

People have been wondering for a long time about the cause of this phenomenon, but even today, scientists cannot answer this question. One popular version is that it is a rare atmospheric phenomenon when a unique combination of thick fog, clouds and smoke from intense forest fires has occurred in an area.

Darkness and balls in Sweden

On May 16, 1808, an even more strange “dark day” happened in the Swedish city of Biskopsberg. At that time, about 300 people lived in the city. It was a warm spring day and almost all of the city’s residents were busy working their fields. Around noon the sun began to fade. It gradually acquired the color of a dark red brick, and ceased to emit light.

It wasn’t as dark as it was at night, but it was still very gloomy and people could watch the “dying” sun without fear of being blinded.

Then something even stranger happened. From here appeared small round balls flying low above the ground. They were 10-12 centimeters in diameter and were dark brown in color. Suddenly, these balls began to rise high in the sky and became solid black. They moved very slowly in the sky.

Among the observers of this phenomenon was Windmark, a member of the Swedish Academy of Sciences. He saw one of the balls fall from the sky. It started to change it’s color like a soap bubble, and when it hit the ground and burst. It left an unusual gelatin thin film that quickly dried.

What happened is even harder to explain than in New England. In fact, no eyewitnesses have been mentioned in history except Windermark, and the city of Biscopsberg itself has long since ceased to exist. Strange balls have not been identified with any natural phenomenon.

A much newer, but no less strange case of unexplained darkness occurred in Verkhoyansk, Yakutia, Russia. On the morning of July 20, 2018, the sky suddenly darkened, making the sun impossible to see, and everything around sunk in twilight. The sky turned dark yellow-brown.

At one point, the darkness in the region became almost like at night. People were very excited and confused. This phenomenon was also accompanied by an unusual amount of birds – lake gulls, which were later discovered near Lake Baikal-Kwell.

Later, local officials announced that the incident was caused by heavy smoke from a forest fire. But, locals have spoken about UFOs, secret climate tests or launching a military secret rocket.

The spread of conspiracy theories is also compounded by the fact that, apart from local officials, none of the authorities spoke of this phenomenon. As if it quickly became a taboo subject.

When a year later, something like that happened again in the same area (the sun did not appear in the sky in the morning, but much later), the authorities again did not comment.

In this article:dark days, sudden night