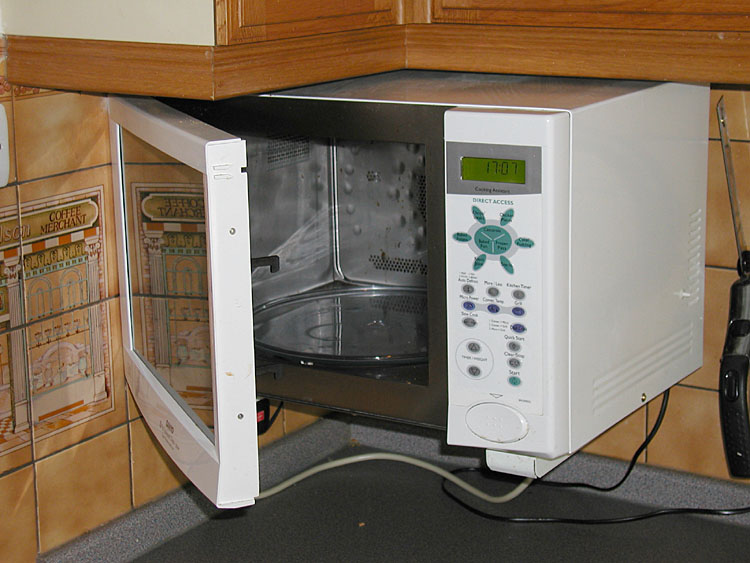 Did the Russians ban microwave ovens following extensive research into their health hazards? Read about that and a host of other reasons why you might want to stop nuking your food at Live Free Live Natural (challenge to disinfonauts: can you find corroborative sources? According to The International Microwave Power Institute it ain’t so.):

The Nazis are credited with inventing the first microwave-cooking device to provide mobile food support to their troops during their invasion of the Soviet Union in World War II. These first microwave ovens were experimental. After the war, the US War Department was assigned the task of researching the safety of microwave ovens.

But it was the Russians who really took the bull by the horns.

Twenty years of Russian research (and German studies as far back as 1942 in Berlin) make a strong argument against the safety of microwave cooking.

Their findings led the Russian government to issue an international warning about possible biological and environmental damage associated with the use of microwave ovens and other similar frequency electronic devices (e.g. mobile phones).

I was not able to personally evaluate any of these older bodies of research, since those documents are now difficult to track down, so I can’t attest to their methodology or conclusions. All you can do is weigh their findings appropriately, as best you can.

The Powerwatch article cited above summarizes the Russian research quite well, which I will duplicate below.

I might add that this finding is supported by the 1998 Japanese study by Watanabe about vitamin B12 in milk, cited above…

Advertisement. Scroll to continue reading.
In this article:Food, health, microwaves