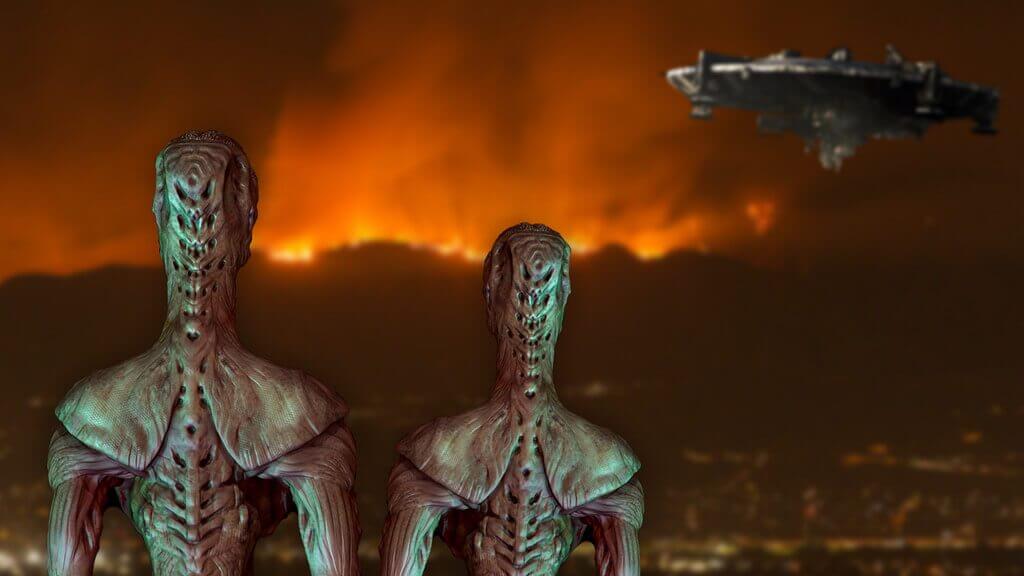 Are humans the only civilization that face climate change? A look at aliens and climate change, the ‘carbon bubble’ that could collapse the global economy, India’s plastics ban, and the surprisingly environmentally-friendly behaviours of climate change skeptics. Its What’s Up in Climate Change.

Is sustainability ever a possibility for civilizations that use natural resources? Some scientists question if our current climate change predicament is unique to human beings or simply inevitable for any type of life form that intensively harvests natural resources using technology, such as farming practices, to develop civilizations. Scientists wonder if life forms other than humans can harvest energy without causing climate change that destroy the civilization.

Previous astrobiological studies have indicated the possibility that other planets in the universe can support energy-harvesting species, such as Kepler-62f and Kepler-62e, however there is currently no available data indicating the existence of such exo-civilizations, or more commonly ‘aliens’.

To further understand the human-induced climate change on Earth, a recent study from the University of Rochester investigated if aliens are capable of living sustainably without compromising the health of their environment, or if population growth and the use of natural resources will result in catastrophic climate change that would wipe out the entire civilization.

The evolution of a civilization’s population growth and use of natural resources was modelled with feedback relationships and demonstrated four potential outcomes:

While there is a possibility for alien civilizations to live sustainability, this study forces us to ask ourselves – what will the outcome for humans be?

The ‘carbon bubble’ could collapse the global economy

The good news is that one day low-carbon technologies will power the world, the bad news is that it will crash the global economy in the process, according to a new study.

Global economic growth has created such a high demand in fossil fuels that companies’ assets in fossil fuels are overvalued and have created a ‘carbon bubble’ – a sudden drop in fossil fuel demand could leave companies with trillions of dollars in stranded assets and unable to make profit from these investments, which could collapse the global economy and trigger a financial crisis similar to the Great Recession of 2008. Researchers predict that the world will slowly transition to low-carbon energies, a transition that puts the fossil fuel industry at risk. Credit: Gerry Machen

The bubble is expected to burst by 2035 according researchers from the University of Cambridge who predict the world will transition to low-carbon economies as renewable energies become cheaper and more efficient. The study shows that this transition will occur even if there are no additional international climate change policies or additional efforts to follow the Paris Agreement’s goal of keeping warming below 2 degrees Celsius.

There are clear winners and losers in this transition – oil producing countries like Russia, Canada (the new owner of an oil pipeline that will cost at least $4.5 billion CND), and the United States could lose their entire oil and gas industries, countries with limited exposure to fossil fuel exposure will benefit, including Germany, and the European Union. The study explains that resisting a renewable energy transition and continuing to invest in a fossil fuel economy will cause even more economic loss as the value of fossil fuels will drop so low production will not be affordable as assets become stranded.

A renewable energy transition would result in a global wealth loss of $1-4 trillion USD and the consequences of an economic collapse can be managed by nations divesting from fossil fuels as an ‘insurance policy’ against the decisions of the rest of the world.

India will ban all single-use plastics by 2022

Indian Prime Minister Narendra Modi recently announced that India will ban all plastic in the country by 2022 and the state of Tamil Nadu will ban plastic by 2019 – with exclusions for plastic packages for essential items like medicines and oil. The environmental impact of banning single-use plastic is expected to be huge – by 2050 India is projected to have the largest population of 1.6 billion people who won’t be using disposable plastics. The national plastic ban announcement came on June 5 as India was hosting the United Nations World Environment Day with ‘Beat Plastic Pollution’ as this year’s main theme. India has struggled with a number of environmental issues – air pollution is extreme that breathing in New Delhi is like smoking 50 cigarettes a day and extensive garbage pollution in cities.

Plastic pollution, particularly in oceans, is a trending topic in conversations about environmental protection and climate change. Bangladesh banned plastic bags after a flood was caused by littered plastic bags that clogged the capital city’s drainage system during a moderate rainfall and Prime Minister Theresa May has ambitiously committed to eliminating all avoidable plastic waste in the United Kingdom by 2042.

Do climate skeptics act the most environmentally-friendly?

Individuals that believe in climate change might not be the ones that act the most sustainably, according to a new year-long study that measured Americans climate change beliefs and their engagement in pro-environmental behaviours, such as recycling. Pro-environmental actions, such as recycling, can be a result of societal norms, individual values, and government programs. Credit: Mr.TinDC

Previous research provides different insights as to why some people do not engage in pro-environmental behaviours – some outright deny that climate change is occurring whereas others that do believe in climate change are reluctant to take action because of perceptions that it is not an urgent threat.

In this article:carbon bubble, climate change