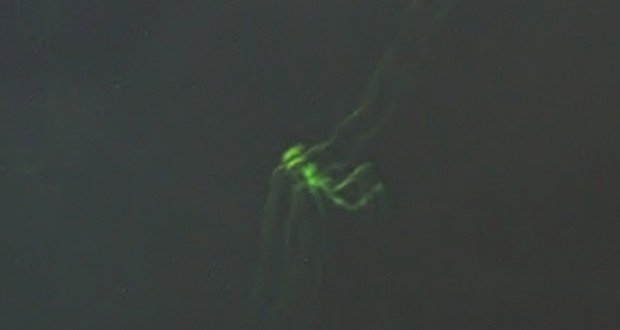 A Perris, CA, couple reported capturing “green entities” and orbs inside their home since 2012, according to October 1, 2014, testimony in Case 60250 from the Mutual UFO Network (MUFON) witness reporting database.

The couple uploaded one piece of video and four images from June 6, 2013, although the report indicates similar activity over a two-year period: Video 1, Image 1, Image 2, Image 3 and Image 4. “My husband and I were in the office room area with the door open playing Xbox 360 on our flat screen TV,” the reporting witness stated. “I felt a strange feeling as if we were being watched or something or someone was in the room. I grabbed my camera and just started taking pictures around the whole room and doorway. I then looked at the pictures I captured and was amazed at the outcome.”

Even after moving three times, and installing four security cameras, the orbs and entities continue to appear.

“I constantly see orbs in and outside of my home on my cameras and they change direction, shape and stop in mid air and then continue in another direction. Bugs, dust, flashlights do not do this. My last straw was seeing a light beam with what looked like an alien or something with a head and eyes inside.” The witness described the video footage.

“On the video captured you can clearly see I am trying to figure out what this is. The beam of light shines right next to the office doorway and on the right side corner of the screen at a certain frame there appears an unexplainable glowing object and then you see a mist shaped like a little being walk across the screen then turn around look into the camera and fastly walk back.”

“Please enlarge the photo and notice the blue, green, and red dots around the object. I have lots more photos and video. I recorded video on about four to five different recording devices but they all show the same thing.” Perris s a city in Riverside County, California, population 68,386. California MUFON is investigating. California has a current UFO Alert Rating of 3 with a high number of recent reports nationally. California had 99 UFO reports in August 2014 – the highest reporting state. The above quotes were edited for clarity. Please report UFO activity to MUFON.com.

In this article:green entities, MUFON