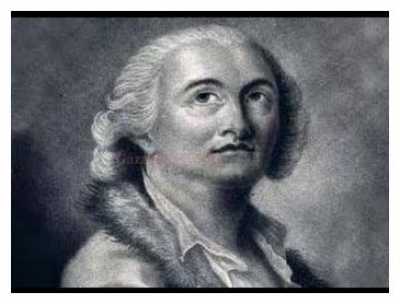 Italian paranormal-phenomena experts have been called to the Tuscan hilltown of Arezzo to probe a dozen alleged sightings of the ghost of legendary 18th-century alchemist, adventurer, con-man and occult dabbler ‘Count’ Cagliostro.
“We aren’t here to ‘bust’ any ghosts, we simply study phenomena which appear strange,” said Massimo Merendi of the National Ghost Uncover (NGU) association. The sightings, “of a two-metre-tall cloaked figure” have occurred in the centre of the town, near its famous Duomo, between March 2011 and last month, Merendi said.
An alchemist, fake physician and necromancer, Cagliostro became extremely rich selling miraculous cures and elixirs of youth, also posing as the founder of an occult branch of freemasonry. Although he was an impostor, his daring and ingenuity briefly made him the darling of Europe.
He was wined and dined by high society across the continent and wound up marrying a member of a high-born Roman family. His real name was Giuseppe Balsamo and he was born to a poor family in Palermo in 1743.
Wanted for a number of petty crimes, he fled Sicily and embarked on extensive travels that were to take him to such far-flung places as Greece, Egypt, Arabia, Persia, Rhodes, and Malta. In France, he became a close friend of the influential Cardinal de Rohan but scandal eventually led to his downfall and he was slapped into the Bastille and later banished from the country.
Arrested for heresy in Rome in 1789 he was condemned to death but the sentence was later commuted to life imprisonment and he died unsung in a prison in the hilltop town of San Leo near Urbino in 1795. He was 51. Legend has it that he placed a curse on the town but townspeople regularly assure outsiders they are protected by St. Francis.
Every year on August 26, the anniversary of his death, a bouquet of flowers is found in Cagliostro’s former cell, reputedly put there by a mysterious lady in black. Cagliostro’s travels and exploits have been described in his memoirs and those of other adventurers including Casanova, inspiring writers such as Alexandre Dumas, but he has not been previously linked to Arezzo.