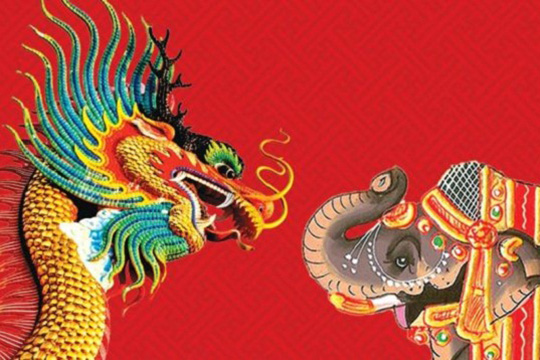 China, which is already trying to change the status quo through de facto control in East Ladakh, has now begun a territorial dispute with Russia.

According to the Chinese resource WION , after Russian officials published a video dedicated to the celebration of the 160th anniversary of the founding of Vladivostok on Weibo, Chinese officials quickly corrected their partners, reminding them that Vladivostok was the territory of China in the 19th century.

This is a tweet from the Russian Embassy in China, where Chinese officials write:

“The history of Vladivostok began in 1860, when Russia built a military port there. Previously, this city was called Haishenvai. It has always been Chinese territory before Russia annexed it through the unjust Beijing Treaty.

It should be noted that in addition to India, China is now also involved in a territorial dispute with Japan and is invading its sea territory.

According to Asia Times Financial, it seems that China is very upset that its “ally” Putin is selling fighter jets to India, the contract for the supply of which was signed with the Minister of Defense of India, who attended the Victory Day parade last week.

President Xi Jinping did not go well in 2020, and here, in addition, he received a sharp reminder of real politics when Russia expressed support for India in connection with its border conflict with China. And although Russia, India and China are members of the Shanghai Cooperation Organization, relations between Moscow and Delhi have deeper roots than the recent warming of relations with President Putin Xi Jinping.

Therefore, despite the growing interdependence between Russia and China, when it comes to energy, weapons and other transactions, including negotiations to create a digital currency system, Moscow has confirmed that it supports India’s position in the Sino-Indian border dispute. To slightly sweeten the pill, Moscow expressed support for China’s new national security law in Hong Kong, but it had little effect on Beijing.

This decision of Russia has great commercial motives, as well as, possibly, historical geostrategic ties. India buys about 60% of its weapons from Russia. Moscow and Delhi have had strong diplomatic relations since the Cold War. Both countries signed the Indo-Soviet Treaty of Peace, Friendship and Cooperation for a Strategic Partnership in 1971. This was a departure from India’s previous position, which during the Cold War followed a non-aligned policy.

A week after the deadly clash on the Indian-Chinese border, Indian Defense Minister Rajnat Singh visited Moscow to take part in the 75th Victory Day parade on Red Square, which marked the victory of the Soviet Union over Nazi Germany in World War II. Singh said that India is going to buy as much military equipment as possible from Russia.

According to Indian media reports, the Minister of Defense bought 33 fighters in one package: 21 MiG-29 and 12 Su-30 MKI, and also ordered the modernization of another 59 aircraft. The total amount of orders amounted to almost 2.4 billion dollars. India also approved a deal to supply the Russian S-400 missile system, which cost $ 5.4 billion. Although the contract was signed back in 2018, India was in no hurry to fulfill it, fearing US sanctions.

In addition, according to Chinese media reports, India also bought 600 of the latest air-to-air missiles and cruise missiles in an unknown quantity. At the same time, Russia announced that it could provide India with even more weapons in a short time.

This move by Moscow infuriated Beijing, which is not surprising: on the eve, China asked Russia not to respond to India’s requests for weapons systems, but Moscow ignored this request.

Professor Harsh Pant from Royal Imperial College London said in an interview with Live Mint that “With this step, Russia wanted to show its independence from China, because, after the annexation of Crimea in 2014, only China recognized the legality of this step, declaring itself an older brother in exchange “.

As a result, many Chinese news agencies began to flog over Russia. So the Jiabao Business newspaper  noted that Putin has lifted Russia from its knees for 20 years, but so far Russia’s GDP is equivalent to only one Guangdong province. “What happened to Russia?” – asks Jiabao Business.

The IMF report “Prospects for the Development of the World Economy” recently predicted that Russian GDP will fall by 6.6% this year, so by the end of 2020, Guangdong will even surpass Russia in terms of GDP.

Why does Russia want to sell weapons? According to the latest data, Russian oil reserves are in eighth place in the world, amounting to 80,000 million barrels. Rich oil resources brought Russia a steady stream of profits, but the recent fall in oil prices, for which Moscow was partially responsible, hit the country hard. Russia, which lives earning money lying on the couch, has completely turned into a typical commodity country.

The country’s second problem is unthinkable corruption, and even Putin admits that the efficiency of industrial production in Russia is lower than that of Western countries. Therefore Jiabao Business further recommends, before meddling in other people’s border disputes, Moscow is necessary to modernize its industrial structure, punish bribe takers and improve international relations.

Advertisement. Scroll to continue reading.
In this article:China, featured, Russia