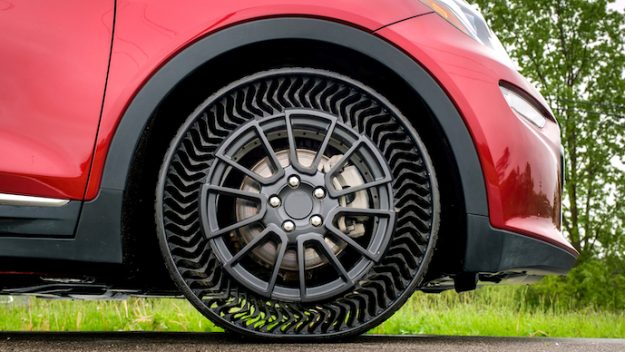 Michelin and GM had unveiled a novel wheel technology- Uptis (Unique Puncture-proof Tire System) in the year 2019. The airless tires are in the preliminary stage currently, but there is a chance of them being rolled out by 2024.

The rubber tires currently used are prone to dangers like blowouts but the airless tires will eliminate such problems. They will also be low-maintenance as people won’t need to check them for punctures and pressure. 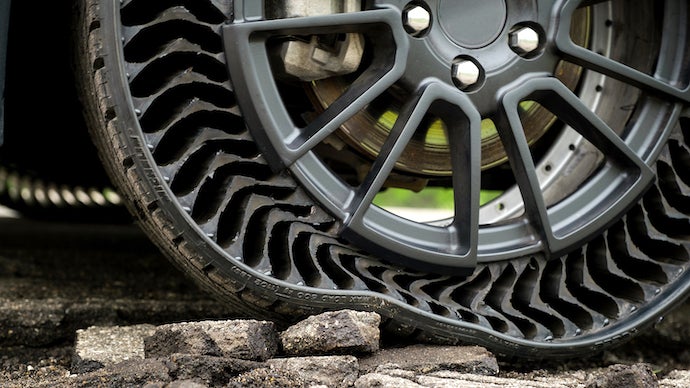 Another big advantage of this high-technology is that the number of tires that are wasted will decrease. Also, the amount of raw material used to make rubber tires will go down along with the energy required to build those tires. It will be beneficial as far as sustainability is concerned, believe the creators.

Uptis tires will also be more durable because they won’t undergo damage easily. Unlike the rubber tires that get damaged by the excess or lack of air, these airless tires will have no such issues.

The CEO of Michelin, Menegaux said that Uptis supports the company’s dream of making mobility sustainable. According to him, working with GM, the company can conquer the future now.

Michelin’s VISION Concept Tire is a 4 pillar strategy to conduct R&D and bring sustainability in mobility. Uptis is the first step first in this direction.

The intention with which GM is working is to introduce the airless tires in passenger vehicles by 2024. However, the details about Uptis aren’t been out yet. Neither of the companies is willing to share the details about this wheel technology.

It’s not clear what material is used to make these tires. It’s also unknown how they’ll function. Any noticeable difference has also not been mentioned.

Michelin said in its FAQs that Uptis has a common concept as that of their Tweel technology. The latter is a tire-wheel assembly where ‘spokes’ are to bear the weight and there is an outer rim.

General Motors was expecting to start testing the airless tires on the Chevrolet Bolt EVs by the end of 2019, but there are no further developments in this area.