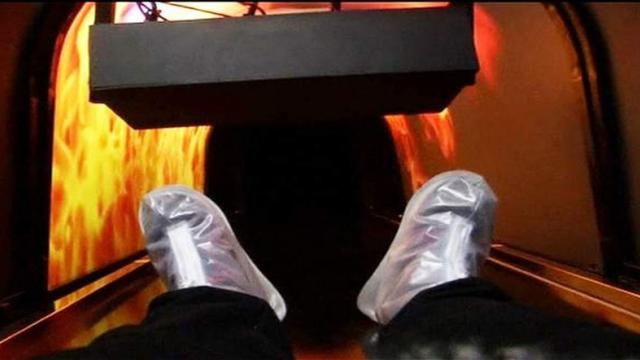 The American, conservative, far-right news website Breitbart News , published an article in which allegedly witnesses talk about burning hopelessly coronavirus patients on the verge of death in crematoria.

The RFA noted that it could not independently confirm that coronavirus patients were burned alive in China, China did not confirm or refute these rumors. However, rumors have been circulating that there will be room for new patients in overcrowded hospitals in Wuhan; medical staff selected older patients less likely to survive the infection and sent them to incinerators while they were still alive and conscious.

The RFA quoted a witness named Ma “close to the funeral industry,” who said he heard reports of “people who were put in body bags while they were still moving.”

The source also noted the presence of videos from an anonymous elderly woman who was being treated at Wuhan Hospital, allegedly from the Chinese coronavirus.

“One elderly woman said that they put one guy in … a body bag when he was not dead, and took him to the crematorium because there was no way to save him,” Ma told RFA.

In February, a video of an elderly woman who, according to her, she witnessed how a patient was next to her in Wuhan Hospital, who was still alive, was put on social media and put in a body bag.

“She has not died, her legs and arms are still moving,” the woman says, “[they wrapped her in a plastic bag and zipped it up.”

According to New Tang Dynasty, a television station affiliated with the persecuted Chinese Falun Gong movement, the woman spoke with a Wuhan accent, suggesting that she came from a central Chinese city.

The Taiwanese Taiwan News tracked the origin of the video in the Chinese youth production student group, which reportedly uploaded the video on February 24th. Taiwan News noted that the woman claimed that she had symptoms of coronavirus, but since she did not have serious symptoms, unlike the person who was taken away, and she estimates he was over 70.

“She said that this man was weak, but was still breathing when medical workers“ tied his head, ”and then his arms and legs, which“ were still moving, ”the Taiwan News said , noting that she also complained that in the hospital to which she had been admitted, the patients had no other treatment for coronavirus than oxygen.

The woman said she felt that older patients in the hospital were treated “like dead dogs.”

Neither Taiwan News nor the RFA can independently confirm reports of the burning of Wuhan residents alive.

The Chinese Communist Party claims that it recorded 82,718 cases of coronavirus nationwide and 3,335 deaths as of Tuesday. The vast majority of them, 3,212 deaths, were recorded in Hubei Province. Wuhan is the capital of this province.

Numerous reports citing sources in seven Wuhan funeral homes dispute this assumption, believing that the death toll in the city is ten times the official death toll in China across the country. Reports of hundreds of bodies cremated in some funeral homes began to appear in February, at the height of an epidemic in the city. Government officials do not allow residents to take the remains of their relatives until the end of March.

When the funeral homes were opened for the distribution of ashes, according to witnesses, some of them distributed up to 5,000 sets of remains per day. It is estimated that the number of sets of remains distributed last week in Wuhan ranges from 30,000 to 46,000.

“There are suspicions that many people died in their homes without a diagnosis, and at first there were no test kits,” said an anonymous resident in his report last week. “No one in Wuhan believes the official figures.

A source at the funeral home reported that at some point Wuhan cremated so many bodies that some incinerators broke down, as a result of which cremators placed several bodies in one incinerator at a time to somehow cope with the influx of the dead. As a result, several cases were recorded when people received urns with ashes, in which there were objects that they did not recognize, which clearly did not belong to their loved ones.

“A resident of Jiangan County in Wuhan, named Liu, said she found a men’s belt buckle in an urn that she was given, presumably with her mother’s ashes,” the RFA said. “And a resident of Hongshan said he found the remains of a ceramic tooth crown, denture, or implant in an urn marked with his father’s name, although his father never had such an item.”