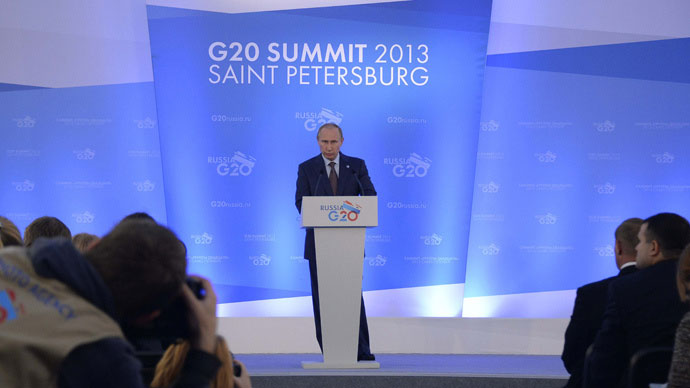 The alleged chemical weapons use in Syria is a provocation carried out by the rebels to attract a foreign-led strike, Russian President Vladimir Putin said at the G20 summit.

There was no 50/50 split of opinion on the notion of a military strike against the Syrian President Bashar Assad, Putin stressed refuting earlier assumptions.

Only Turkey, Canada, Saudi Arabia and France joined the US push for intervention, he said, adding that the UK Prime Minister’s position was not supported by his citizens.

Russia “will help Syria” in the event of a military strike, Putin stressed as he responded to a reporter’s question at the summit.

“Will we help Syria? We will. And we are already helping, we send arms, we cooperate in the economics sphere, we hope to expand our cooperation in the humanitarian sphere, which includes sending humanitarian aid to support those people – the civilians – who have found themselves in a very dire situation in this country,” Putin said. 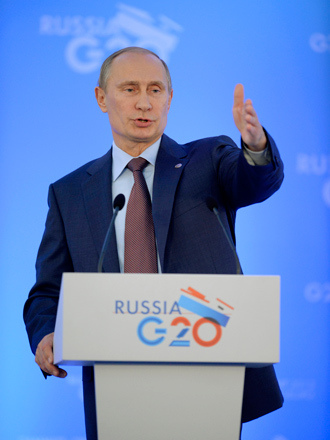 Russia’s President Vladimir Putin gestures during a press conference at the end of the G20 summit on September 6, 2013 in Saint Petersburg (AFP Photo)

Putin said he sat down with US President Barack Obama on the sidelines of the G20 summit and talked for about half an hour in “a friendly atmosphere”.

Although the Russian and the American leaders maintained different positions regarding the Syrian issue, Putin said they “hear” and understand each other.

Russian Foreign Minister Sergey Lavrov and US Secretary of State John Kerry will continue discussing the situation in Syria “in the short run,” Putin said.

Meanwhile, President Obama reiterated in his summit speech that the US government believes Syrian President Bashar Assad’s forces were behind the chemical weapons use.

Obama pledged to make a good case on the issue for both the international community and the American people, saying many nations are already “comfortable” with the US’ opinion.

While admitting “a number of countries” at the summit stressed any military action plan should go through the UN Security Council, Obama said the US is in a different “camp” that questioned the UNSC effectiveness.

Both presidents stressed that the situation in Syria could create a dangerous precedent, but supported their points with contrasting arguments.

Obama stressed his “goal” and US “responsibility” was to maintain international norms on banning chemical weapon use, saying he wanted the enforcement to be “real.” US President Barack Obama answers a question during a press conference in Saint Petersburg on September 6, 2013 on the sideline of the G20 summit (AFP Photo)

“When there is a breach this brazen of a norm this important, and the international community is paralyzed and frozen and doesn’t act, then that norm begins to unravel. And if that norm unravels, then other norms and prohibitions start unraveling, and that makes for a more dangerous world,” Obama said.

Putin, on the contrary, stressed that setting precedents of military action outside a UN Security Council resolution would mean the world’s smaller countries can no longer feel safe against the interests of the more powerful ones.

“Small countries in the modern world feel increasingly vulnerable and insecure. One starts getting the impression that a more powerful country can at any time and at its own discretion use force against them,” Putin said, citing the earlier statement made by the South African President.

Such practice would also make it much harder to convince North Korea to give up its nuclear program, Putin pointed out.

The meeting of the leaders of the major world economies – G20 – took place in St. Petersburgh, Russia. The participants of the summit focused on economic issues during round-table talks, including unemployment, the lack of global investment, and better international financial regulation. While on the sidelines the conversation shifted to the issue of the alleged chemical weapons attack in Syria and the possibility of military action in the war-torn country.

In this article:help, PUTIN, Russia, syria