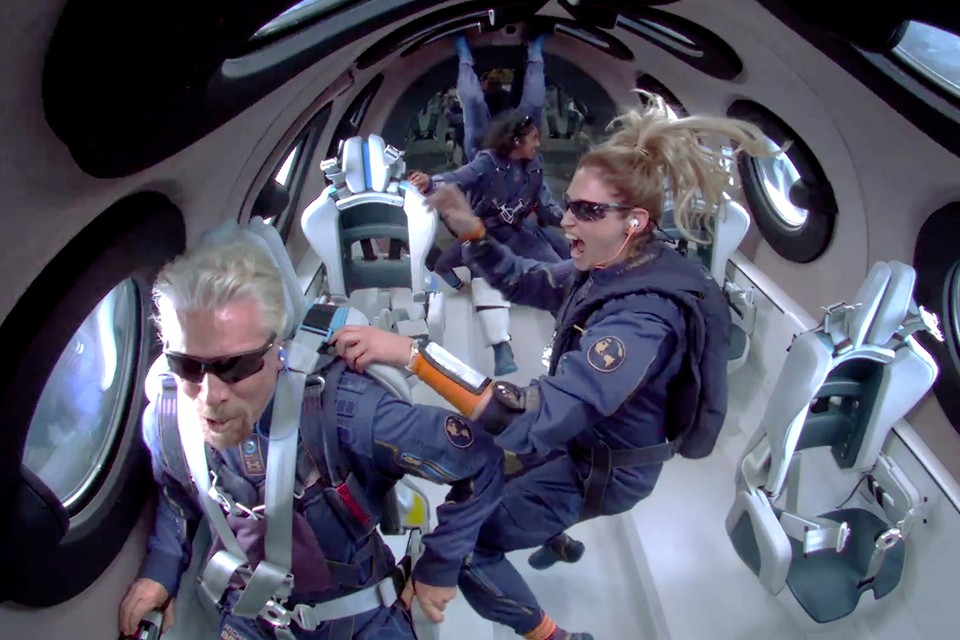 Richard Branson, won the space race of billionaires against the richest man on the planet Jeff Bezos. When the Amazon founder announced that he would launch into space on July 20 (the day celebrates the 52nd anniversary of the American landing on the moon) on his own ship, New Shepard, Branson decided to wipe his nose off his richer rival.

And suddenly he announced that he would take a place in the crew of the Unity rocket plane, although two weeks before the start he was not going to fly anywhere. In any case, he did not speak about it publicly. The flight lasted 2.5 hours, of which about 6 minutes, two pilots and four passengers experienced a state of weightlessness, then the orbital plane landed safely.

However, this story goes far beyond the widespread plot, when rich boys are measured against who’s rocket is longer. The billionaire competition marked the beginning of a new stage in space travel.

Before that, a tour into space was affordable only for multimillionaires. In the 2000s, a total of seven people were in orbit. American financier Dennis Tito paved the way to the stars for tourists, in 2001 he spent 6 days on the ISS and this pleasure cost him 20 million dollars.

His followers paid between $ 20 million and $ 40 million. They stopped taking tourists into space in 2009, but Roscosmos said it was ready to return to this program in 2023, we are talking about the flight of two travelers. Elon Musk, the creator of the first private spacecraft Crew Dragon, has his own views on the wallets of potential commercial tourists. His starship has space for four crew members and Musk is selling a 10-day tour to the ISS for $ 55 million (first flight is scheduled for fall 2021).

But in any case, when it comes to a full-fledged space flight, the price of the issue is tens of millions of dollars and, for obvious reasons, the circle of potential tourists is narrow. They, of course, are terribly far from the people, but it is more terrible that in this situation space tourism is far from self-sufficiency.

Richard Branson and Jeff Bezos sell space “second fresh” – their vehicles fly at an altitude of about 100 kilometers – at this mark is the Karman Line, which is considered the official border between the atmosphere and space. For comparison, the orbit of the International Space Station is 408 kilometers. The flight itself is a “dive” into outer space and in time the space phase takes a few minutes.

But the idea behind the projects of Richard Branson and Jeff Bezos is not at all to surf the universe (as Musk wants). Their task is much more modest: to make space tourism relatively massive and affordable.

The price of a ticket for a Branson rocket plane is 250 thousand dollars, the cost of a flight on a Jeff Bezos suborbital rocket is also approximately in this price range – it is at least two orders of magnitude cheaper than that of Roscosmos and Musk. But for this money, the tourist gets the whole gamut of thrilling cosmic sensations – starting overloads, flying in zero gravity, the opportunity to see the Earth from space, to make sure that it is round and not flat. And, of course, take a bunch of unique selfies …

Justin Bieber is already in line

More than 600 people have already reserved tickets for Branson’s rocket plane. Among them are famous actors, businessmen, musicians, for example, Justin Bieber. But the potential market is much broader. It can be compared to the audience of another extreme project – climbing Mount Everest.

The highest peak in the world has long become a tourist attraction, it has been conquered by a total of about 10 thousand people. On some days, more than 200 tourists climb Mount Everest and each pays for this opportunity from 50 to 100 thousand dollars.

Probably, the number of space fans who are ready to fork out for the sake of fulfilling a childhood dream is also measured in the thousands. Moreover, unlike the conquest of Everest, you do not need serious physical training and there are no age restrictions to jump into space.

Richard Branson himself was 70 years old when Unity was launched. This is not an age even for full-fledged space flights: the most experienced astronaut Glenn Johnson last flew on the shuttle “Discovery” in 1998, when he turned 77 years, 3 months and 11 days (this record, by the way, has not been broken until now).

Jeff Bezos, who starts on July 20, will be 57 years old. However, among his companions (there are 4 people in total) there is, for example, 82-year-old Wally Funk, a well-known woman pilot in the United States. It is clear that they are all people for their age, athletic and prepared, but still impressive.

How Unity differs from New Shepard

Basically, the Branson and Bezos companies are exploiting the same idea: reducing the cost of space travel by building reusable ships. Only Branson’s Unity is a rocket plane that is launched to launch altitude (about 16 kilometers) by a powerful booster plane. And Bezos’s New Shepard is a reusable spacecraft powered by a single-stage reentry rocket powered by hydrogen fuel.

Advertisement. Scroll to continue reading.
In this article:New Shepard, Unity