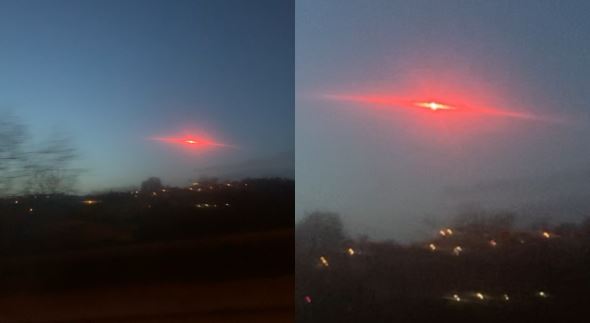 REPORTS of UFO activity in Bradford over the last five years have included a fast-moving oblong object with flashing lights over Horton Bank Top and a craft-like white ball near Wyke.

Since the start of 2015, police in the city have recorded three incidents that include keywords ‘Alien’ or ‘UFO’ within the incident log text.

Details of the reports were revealed after a Freedom of Information request by the Telegraph & Argus.

In August 2015, a caller in the Toller area reported seeing an oblong shape with three red lights with three flashing blue lights above it at about 11pm. The report says: “It was moving exceptionally fast.; it went as far as Horton Bank Top, then back, went again and then came back.”

In August 2017, there were reports of a UFO in an unknown location in Bradford. The report says: “This is triangle shaped and red/blue and white lights can be seen; he states the UFO is hovering at a distance but is slightly moving.; he states the sky is clear.”

In April 2018, officers received a call from Wyke. The incident log reads:

“Caller reporting she has seen a UFO on 22/2 that she has taken video of; seen a bit after 1900; caller states she was woken up by this; the UFO is a white ball in the sky then turns into a blue-purple ball; ‘it looks like a craft’ with lights; caller filmed this from her house out the window; seemed to turn with caller as she looked at it ; sounded like a helicopter; the UFO was over caller’s house for a while, unknown how long it was there for; only 1 object seen; caller looking from front of her house.”

The T&A submitted the Freedom of Information request after receiving a video clip from Juran Harrison in late November of a strange light in the sky above the Tong area of Bradford.

That incident on Tong Road at 4.36pm on Tuesday November 26, was described as a “possible UFO sighting” and attracted great interest from readers, so we thought we’d find out what other ‘UFO reports’ had been made in recent years.