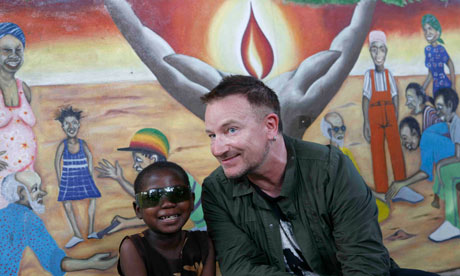 ‘Bono’s positioning of the west as the saviour of Africa while failing to ­discuss the harm the G8 nations are doing has undermined campaigns for justice and accountability.’

It was bad enough in 2005. Then, at the G8 summit in Scotland, Bono and Bob Geldof heaped praise on Tony Blair and George Bush, who were still mired in the butchery they had initiated in Iraq. At one point Geldof appeared, literally and figuratively, to be sitting in Tony Blair’s lap. African activists accused them of drowning out a campaign for global justice with a campaign for charity.

But this is worse. As the UK chairs the G8 summit again, a campaign that Bono founded, with which Geldof works closely, appears to be whitewashing the G8′s policies in Africa. 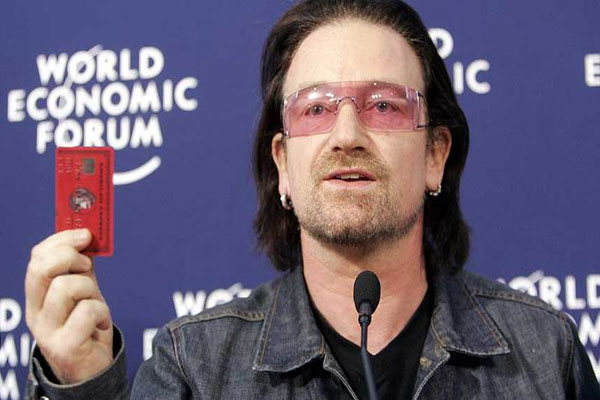 Last week I drew attention to the New Alliance for Food Security and Nutrition, launched in the US when it chaired the G8 meeting last year. The alliance is pushing African countries into agreements that allow foreign companies to grab their land, patent their seeds and monopolise their food markets. Ignoring the voices of their own people, six African governments have struck deals with companies such as Monsanto, Cargill, Dupont, Syngenta, Nestlé and Unilever, in return for promises of aid by the UK and other G8 nations.

A wide range of activists, both African and European, is furious about the New Alliance. But the ONE campaign, co-founded by Bono, stepped up to defend it. The article it wrote last week was remarkable in several respects: in its elision of the interests of African leaders and those of their people, in its exaggeration of the role of small African companies, but above all in failing even to mention the injustice at the heart of the New Alliance – its promotion of a new wave of land grabbing. My curiosity was piqued.

The first thing I discovered is that Bono has also praised the New Alliance, in a speech just before last year’s G8 summit in the US. The second thing I discovered is that much of the ONE campaign’s primary funding was provided by the Bill and Melinda Gates Foundation, two of whose executives sit on its board. The foundation has been working with the biotech company Monsanto and the grain trading giant Cargill, and has a large Monsanto shareholding. Bill Gates has responded to claims made about land grabbing in Africa, asserting, in the face of devastating evidence and massive resistance from African farmers, that “many of those land deals are beneficial, and it would be too bad if some were held back because of western groups’ ways of looking at things“. (Africans, you will note, keep getting written out of this story.)

The third thing I discovered is that there’s a long history here. In his brilliant and blistering book The Frontman: Bono (in the Name of Power), just released in the UK, the Irish scholar Harry Browne maintains that “for nearly three decades as a public figure, Bono has been … amplifying elite discourses, advocating ineffective solutions, patronising the poor and kissing the arses of the rich and powerful”. His approach to Africa is “a slick mix of traditional missionary and commercial colonialism, in which the poor world exists as a task for the rich world to complete”.

Bono, Browne charges, has become “the caring face of global technocracy”, who, without any kind of mandate, has assumed the role of spokesperson for Africa, then used that role to provide “humanitarian cover” for western leaders. His positioning of the west as the saviour of Africa while failing to discuss the harm the G8 nations are doing has undermined campaigns for justice and accountability, while lending legitimacy to the neoliberal project. 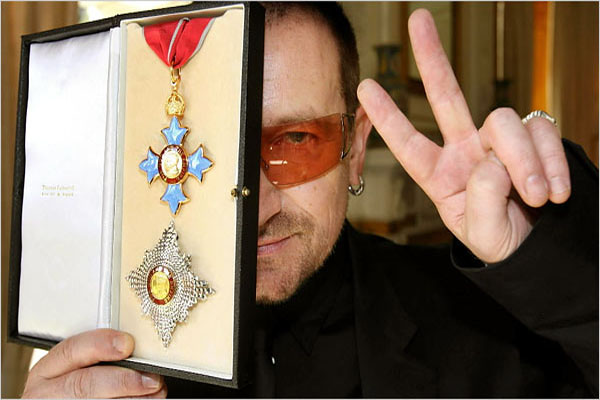 Bono claims to be “representing the poorest and most vulnerable people“. But talking to a wide range of activists from both the poor and rich worlds since ONE published its article last week, I have heard the same complaint again and again: that Bono and others like him have seized the political space which might otherwise have been occupied by the Africans about whom they are talking. Because Bono is seen by world leaders as the representative of the poor, the poor are not invited to speak. This works very well for everyone – except them.

The ONE campaign looks to me like the sort of organisation that John le Carré or Robert Harris might have invented. It claims to work on behalf of the extremely poor. But its board is largely composed of multimillionaires, corporate aristocrats and US enforcers. Here you will find Condoleezza Rice, George W Bush’s national security adviser and secretary of state, who aggressively promoted the Iraq war, instructed the CIA that it was authorised to use torture techniques and browbeat lesser nations into supporting a wide range of US aims.

Here too is Larry Summers, who was chief economist at the World Bank during the darkest days of structural adjustment and who, as US Treasury secretary, helped to deregulate Wall Street, with such happy consequences for the rest of us. Here’s Howard Buffett, who has served on the boards of the global grain giant Archer Daniels Midland as well as Coca-Cola and the food corporations ConAgra and Agro Tech. Though the main focus of ONE is Africa, there are only two African members. One is a mobile phone baron, the other is the finance minister of Nigeria, who was formerly managing director of the World Bank. What better representatives of the extremely poor could there be? 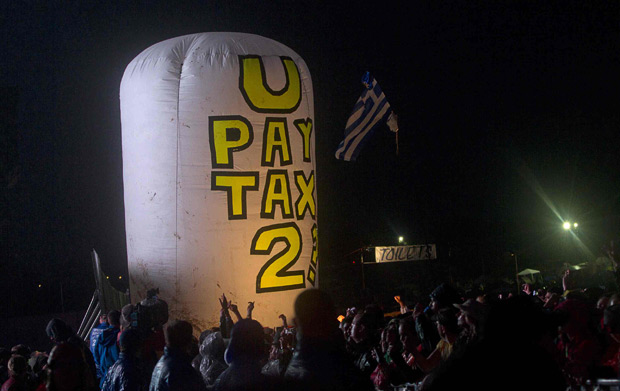 As Bono and his bandmates took to the Pyramid Stage, activists from direct action group Art Uncut inflated a 20ft balloon emblazoned with the message “U Pay Your Tax 2?” exposing U2′s offshore tax avoidance.

If, as ONE does, an organisation keeps telling you that it’s a “grassroots campaign”, it’s a fair bet that it is nothing of the kind. This collaboration of multimillionaires and technocrats looks to me more like a projection of US and corporate power.

I found the sight of Bono last week calling for “more progress on transparency” equally revolting. As Harry Browne reminds us, U2′s complex web of companies, the financial arrangements of Bono’s Product RED campaign and his investments through the private equity company he co-founded are all famously opaque. And it’s not an overwhelming shock to discover that tax justice is absent from the global issues identified by ONE.

There is a well-known if dubious story that claims that at a concert in Glasgow Bono began a slow hand-clap. He is supposed to have announced: “Every time I clap my hands, a child in Africa dies.” Whereupon someone in the audience shouted: “Well fucking stop doing it then.” It’s good advice, and I wish he’d take it.

Bono hanging out with some other NWO criminals: 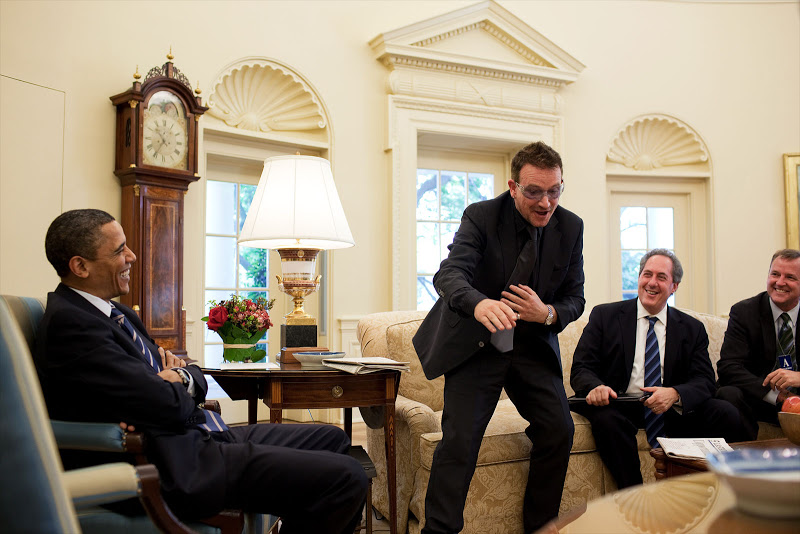 Obama…the teleprompter reading president who bombs kids for a living and gets a peace prize. 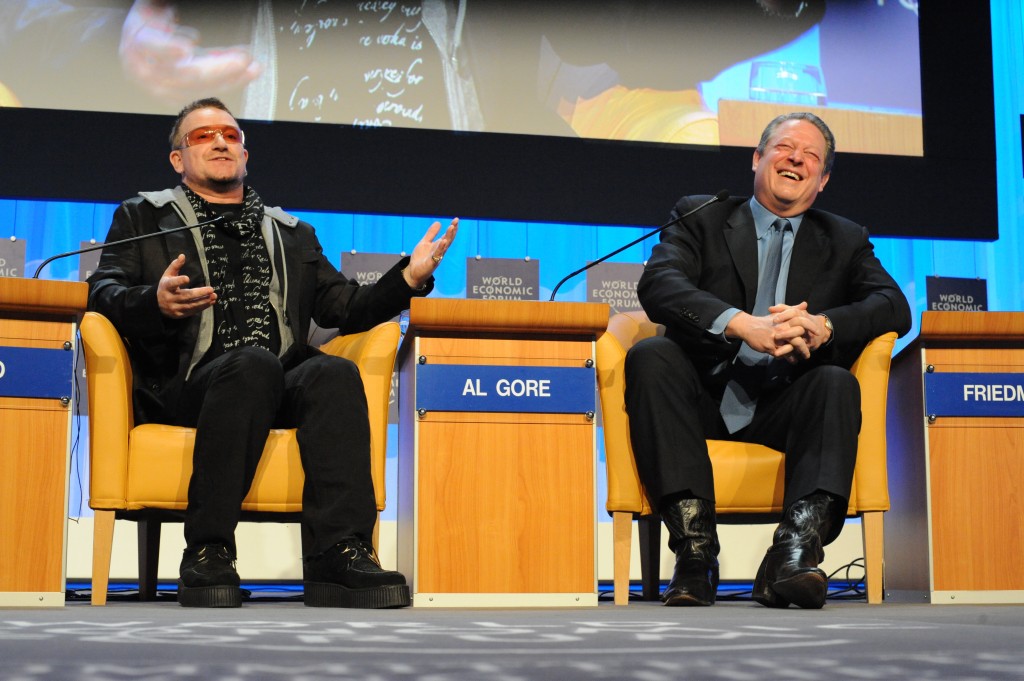 The inconvenient lie that is Al Gore. 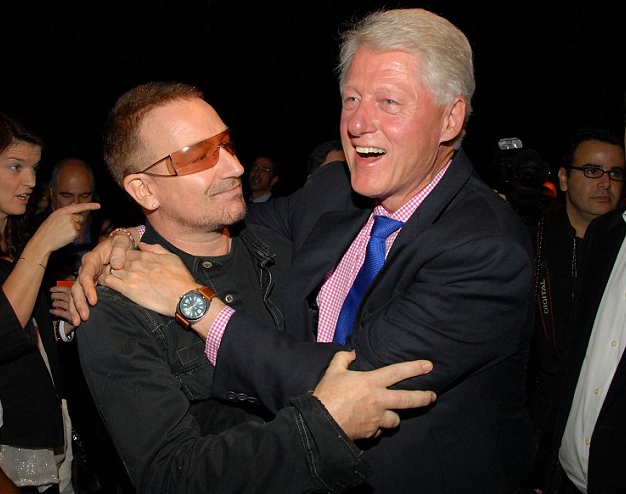 Bill Clinton…where do I even start with this guy? 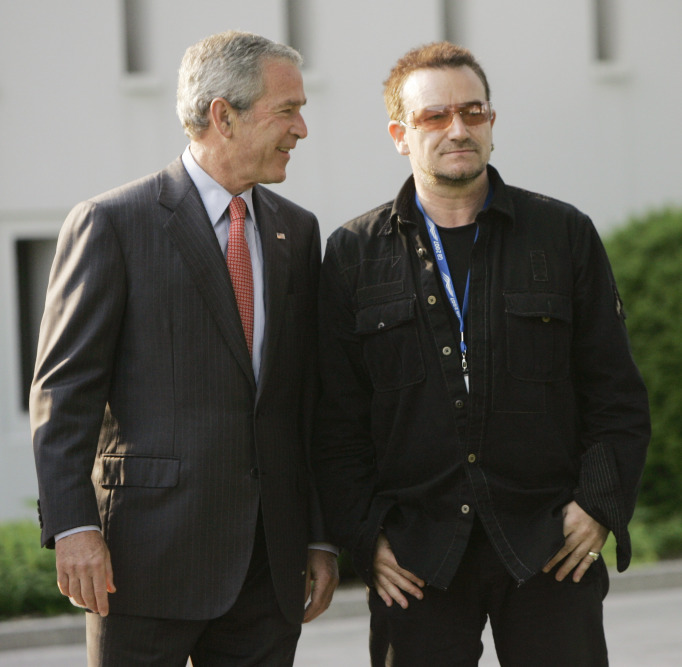 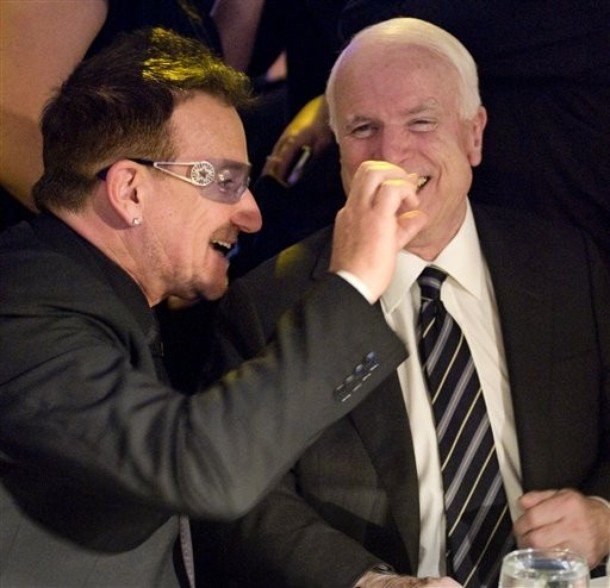 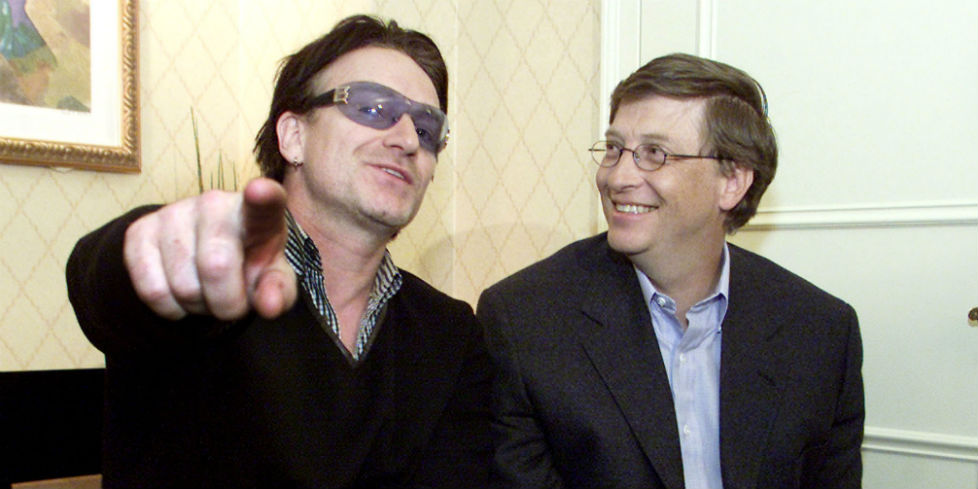 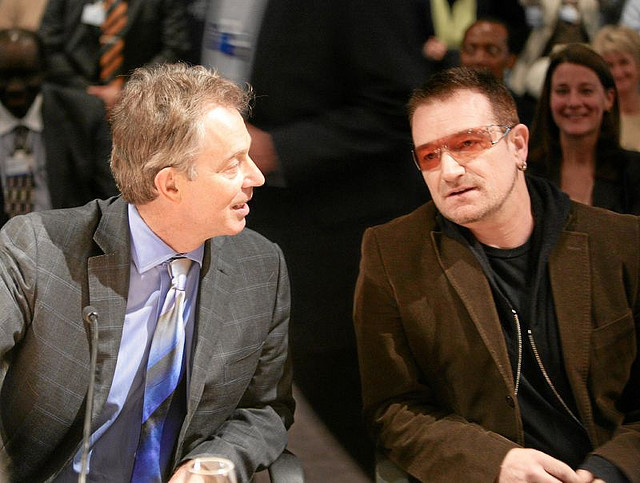 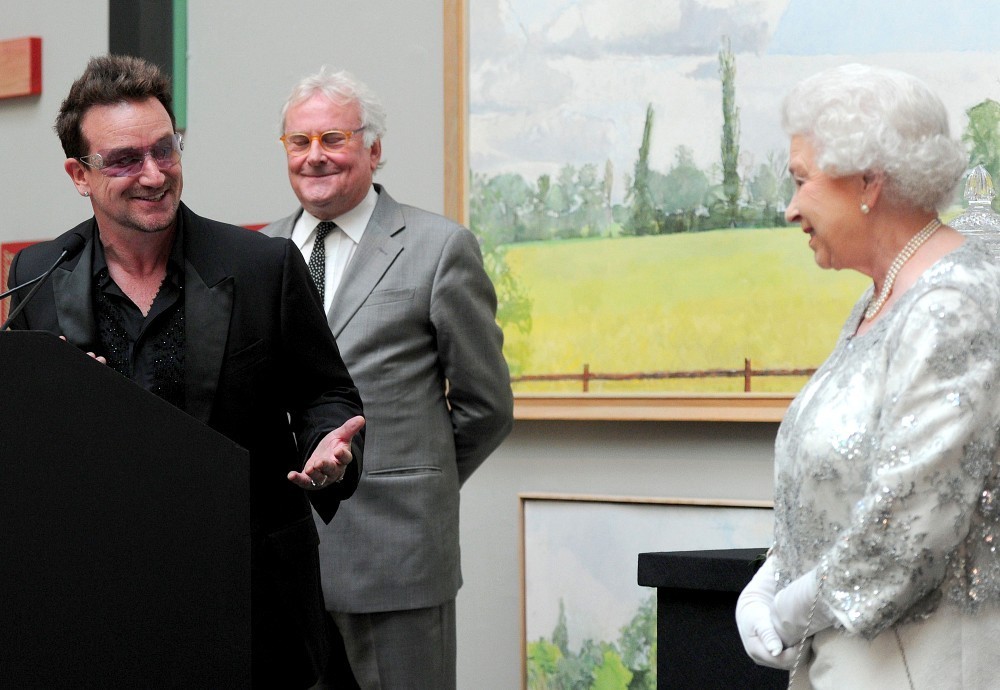 Advertisement. Scroll to continue reading.
In this article:Africa, Bono, U2