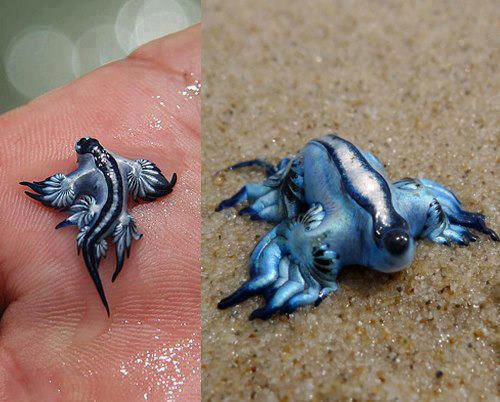 The strange blue creature in the photo above may look like a monster from a Japanese RPG, but is actually a real animal—the Glaucus atlanticus sea slug, to be exact.

Commonly known as the blue dragon or blue sea slug, this beautiful little mollusk can be found off the coast of South Africa, Australia and Mozambique, floating on the surface tension of the water.

the blue dragon is an aggressive predator that feeds on organisms much larger than itself, including the venomous Portuguese man o’ war. Not only that, the glaucus atlanticus actually absorbs the man o’ wars venom (it must be poison-type) and stores it in the tips of the finger-like appendages on either side of its body to use when preying on other fish. And since the venom is concentrated, it can actually be more lethal than the man o’ war it took it from. It’s Super Effective!

Image Credit: CC BY-SA 4.0 PaleoEquii Cryodrakon was absolutely enormous.  Palaeontologists have identified one of the largest flying creatures ever to live on planet...