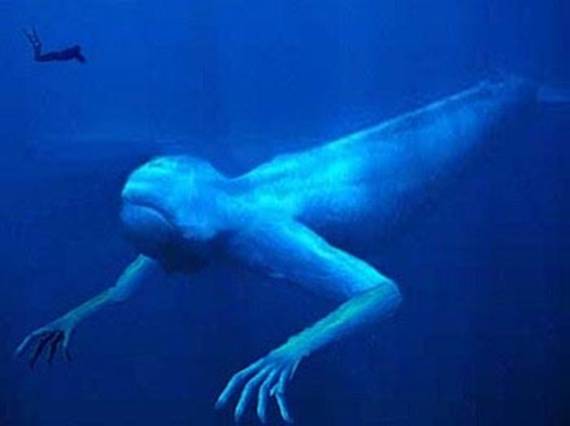 For those coming late to the story…

”The Bloop is the name given to an ultra-low frequency and extremely powerful underwater sound detected by the U.S. National Oceanic and Atmospheric Administration (NOAA) several times during 1997. According to the NOAA description, it “rises rapidly in frequency over about one minute and was of sufficient amplitude to be heard on multiple sensors, at a range of over 5,000 km. The source of the sound remains unknown…”

”Scientists determined that its wave pattern indicates it was made by an animal, and not a giant electromagnet sucking a plane out of the sky, as the creators of Lost were no doubt hoping.”

Here is the “Bloop” as it is commonly presented.

While it may not sound like anything much more than what we all do in the tub from time to time, this particular bloop was heard by listening stations thousands of miles separated.

And when you compare it to the songs of humpback whales, it is only a natural assumption that the sound was generated by a living creature.

”While the audio profile of the bloop does resemble that of a living creature, the system identified it as unknown because it was far too loud for that to have been the case: it was several times louder than the loudest known biological sound.”

”There is no animal big enough or loud enough to make that kind of noise, not by a long shot. Not a blue whale, not a howler monkey, not a startled teenage girl.”

What could have possibly caused this sound?

Many people envision something along the lines of an unknown creature many times lager than the largest whales, from this rather benign, even potentially comical looking one… Or for the Lovecraft fans, this… And it does not help matters much that the sound was recorded not far (in global terms) from where Cthulhu’s undersea dwelling of R’lyeh happens to be as recorded by H.P. Lovecraft, and August Derleth. But still, pretty far. The problem is that while the recording in the video above is how you typically hear the “bloop” when presented on the various Mystery and Unexplained type of television shows, it is a sped up version. Here is how the sound actually happened in real time.

And as near as the “bloop” is to R’lyeh, it also almost as close to Antarctica, and this is a sound consistent with what is called an Icequake as reported on Wired.Com

NOAA has this to say:

NOAA is pretty sure that it wasn’t an animal, but the sound of a relatively common event — the cracking of an ice shelf as it breaks up from Antarctica. Several people have linked to the NOAA’s website over the past week excitedly claiming that the mystery of the Bloop has been “solved”, but as the information on the NOAA website was undated and without a source, Wired.co.uk spoke to NOAA and Oregon State University seismologist Robert Dziak by email to check it out. He confirmed that the Bloop really was just an icequake — and it turns out that’s kind of what they always thought it was. The theory of a giant animal making noises loud enough to be heard across the Pacific was more fantasy than science.