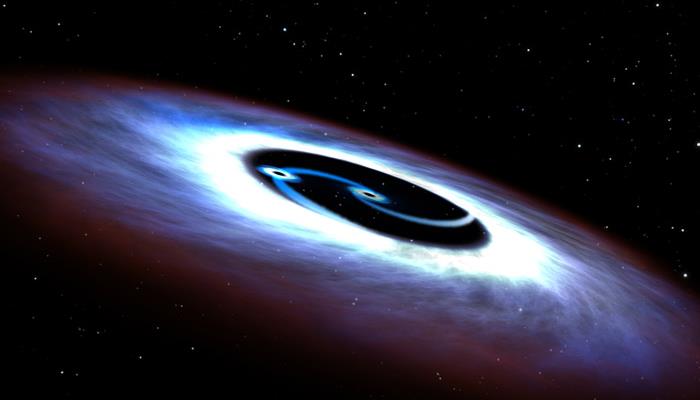 Indeed – black holes balance on the brink between science fiction and science fact. On the one hand, scientists saw how black holes absorb stars that were too close to them. On the other hand, at the edge of a black hole, is a place known as the event horizon , from where nothing can escape, not even light. But what happens to a spaceship if it gets there?

What happens inside a black hole?

Given all the data we have about black holes , scientists believed that nothing good awaits us inside these massive objects. However, the latest computer simulation showed that once inside a black hole, you can move to a distant part of the Milky Way or to another galaxy. In this case, one of the safest portals may be a supermassive black hole in the center of our galaxy, – Sagittarius A *. Business Insider writes about this with reference to researchers from NASA.

We do not know what is happening beyond the event horizon inside the black hole. Scientists agree that if you go far enough into a black hole, gravity will become so strong that it will destroy everything in its path. But sci-fi films are more optimistic – in them black holes are portals for traveling through space and time, or portals for traveling to other worlds. In fact, in the center of each black hole is a point of infinite density, called a singularity. It is the singularity that gives black holes a strong gravitational attraction. For decades, scientists believed that the singularities of all blacks are the same, so everything that passes through the event horizon will be destroyed in the same way: everything will stretch and stretch, like infinitely long spaghetti.

But all this changed in the early 1990s, when various research groups in Canada and the United States discovered a second singularity called the “mass inflation singularity.” This discovery suggests that you can theoretically survive a journey through a black hole. It will stretch you but ultimately not kill you, that is, you can survive the journey through a black hole. More precisely, through a large rotating black hole in which singularities of this type exist. Now astronomers need to find a suitable black hole to test this theory. And the best place to check is Sagittarius A * – a supermassive black hole in the center of our galaxy, which is located at a distance of 27,000 light years from us.

Given that there is no way to get there, verification of this theory is possible only with the help of computer simulation. That’s exactly what scientists from Umass University of Dartmouth and Georgia College did. According to the results, once inside Sagittarius A * you can feel nothing at the right speed and at the right time .

On the other side of the black hole

As for what happens when you get to the other side, you can’t say almost anything. But the authors of the study have their own ideas. According to the researchers, there is a chance that you will end up in some remote part of our galaxy – potentially remote from any planets or stars, and according to the second probability, you may even end up in another galaxy. It all depends on how far you manage to get into the black hole. Nevertheless, scientists believe that more research is needed before we approach a successful journey through a black hole. But when we are ready, the supermassive black hole in the center of the Milky Way may turn out to be our lucky ticket to another galaxy.

In this article:black holes, featured, portals to other worlds