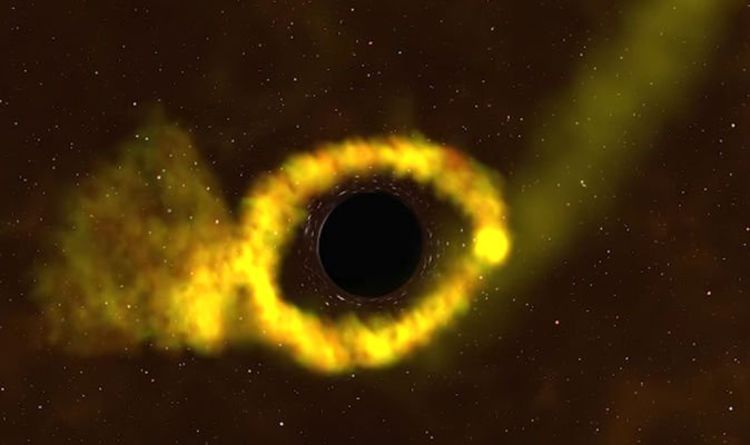 The violent black hole was spotted by NASA’s planet-hunting TESS space probe and confirmed by ground-based observatories. Astronomers were alerted to the event when a star monitored by TESS unexpectedly grew brighter. The event, known as a tidal disruption, causes black holes to consume entire stars or stretch them out like spaghetti dough. Stars fall prey to these destructive tidal disruptions when they venture too close to a black hole.

In this particular case, the event was dubbed ASASSN-19bt after the All-Sky Automated Survey for Supernovae.

ASAS-SN is a global network of 20 robotic telescope observatories with headquarters at the Ohio State University in Columbus, Ohio.

The telescope network, together with NASA, the European Space Agency (ESA) and observatories in Chile validated TESS’ discovery.

Dr Thomas Holoien, from the Carnegie Observatories in Pasadena, said: “TESS data let us see exactly when this destructive event, named ASASSN-19bt, started to get brighter, which we’ve never been able to do before.

“Because we identified the tidal disruption quickly with the ground-based All-Sky Automated Survey for Supernovae (ASAS-SN), we were able to trigger multiwavelength follow-up observations in the first few days.

“The early data will be incredibly helpful for modelling the physics of these outbursts.”

Events like this are incredibly rare and only occur once every 10,000 to 100,000 years in a galaxy like the Milky Way.

Supernova eruptions, by comparison, are much more frequent at one every 100 years or so.

To date, astronomers have only observed about 40 tidal disruptions.

The dips are caused by planets passing in front of stars and is NASA’s main way of discovering exoplanets in distant solar systems.

But for the first time in TESS’ mission, the space telescope observed the opposite of that.

The discovery was published on September 27 in The Astrophysical Journal.

Patrick Vallely, the study’s co-author from Ohio State University, said: “The early TESS data allow us to see light very close to the black hole, much closer than we’ve been able to see before.

“They also show us that ASSASN-19bt’s rise in brightness was very smooth, which helps us tell that the event was a tidal disruption and not another type of outburst, like from the centre of a galaxy of a supernova.”

Advertisement. Scroll to continue reading.
In this article:black holes, Nasa