These pictures show the bizarre square-shaped fire which ripped through a sofa inside a shop.

Passer-by Ragini Patel was on her way to Sainsbury’s just before 9am on Sunday when the young son of a neighbour told her he could see a settee on fire inside the Lettings Company shop in Fulham Road, London which has two floors of flats above.

The long-time Fulham resident quickly called the fire brigade who had to smash down the estate agent’s door to put the fire out which started in a square shape and slowly spread out to burn the entire sofa.

She told Get West London: “I was just going to Sainsbury’s in the morning when my neighbour’s son told me there was a fire in the shop.

“I looked in and a square-shaped fire was burning into the sofa.

“It was very odd.

“I called the fire brigade straight away then started filming because it was very bizarre, I couldn’t figure out how it had started.” Colleagues from the Lettings Company are very grateful to Mrs Patel and her neighbour’s son but are still mystified as to how the fire started in their shop.

Clyde Johnson, from the shop, said: “We’re very thankful to Mrs Patel for phoning the fire brigade but we still have no idea how it started.

“It’s a fire resistant sofa luckily so it minimised the fire but we don’t know if it was caused by a laser pointer or maybe a magnifying glass or just the sun shining in oddly.

“The police can’t figure it out either.”

A London Fire Brigade spokesman added: “The member of the public who called us did the right thing.

“We would advise anybody to do the same thing – call straight away.” 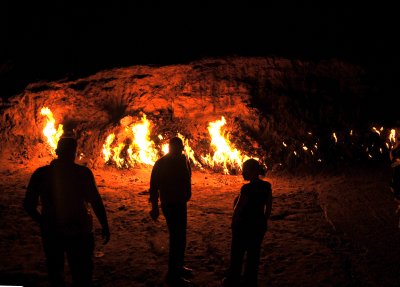 Iran Has A Mountain That Has Been On Fire Throughout All Of Recorded History. (Video)

(N.Morgan) Very cool video of a mountain that has been burning for thousands of years! It is in the southern province of Khuzestan, Iran....