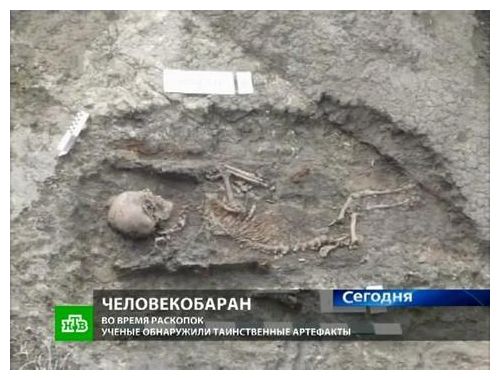 If the reports are true, bizarre skeletons have been unearthed in Nevinnomyssk, Stavropol Krai, Russia that would point to a systematic floccinaucinihilipilification of all aspects surrounding macro evolution. Russia NTV reports Stavropol archaeologists have discovered the unearthing of bizarre skeletons when opening an ancient mound. The mound first produced a strange skeleton that can be best described as “Satyr like”.

Sergey Savenko, one of the discoverers of the satyr like skeleton suggested his first thought was that there was “no scientific explanation for what just unearthed”. ” What if the Stavropol archaeologists have discovered a previously unknown anomalous creature to mankind?” Savenko described the skeleton as having a goat like body with a human head.

Relatively close to the Satyr like skeleton the expedition accidentally unearthed the remains of a horse of epic proportions. The warhorse was of giant size with a shoulder span of almost two meters and was with honors uncharacteristic for an animal in that period.

Anna Shvyreva, Department of Nature in the Stavropol Museum stated: “A special bath shrine was dug in the ground for this horse. It was filled with grass, and horse was on its back in the tub. ”

The skeleton was sent for examination and experts anthropologists have refuted all the fantastic theories of these being evidence of the mythological species, but have not disclosed results of their tests.

Archaeologists have been extremely puzzled when they found a medieval mound strange creature, and at some distance from this gigantic horse herbal bath.

In Nevinnomyssk ordinary, in general, the excavation of an ancient burial mound became virtually episode of “The X-Files.” Archaeologists have found so mysterious artefacts that the experts, just as Dana Scully in the series, denying all non-scientific version of the scientific explanation, yet to offer anything they can not.

The name of this unique artifact was not invented by science fiction fans, and most that are on the conservative scholars. In the ancient burial-place, uncovered during the excavation, it was discovered a strange thing – sheep skeleton with a human skull. More refined definition than chelovekobaran, their discovery, archaeologists were not able to pick up.

Anna Shvyreva, Department of Nature in the Stavropol Museum: “What is it chelovekobaran? That is, there was a combination of cranial young person under 25 years of age and body rams. ”

Sergey Savenko, one of the discoverers of chelovekobarana in the head at first climbed unscientific thought: what if the Stavropol archaeologists have discovered a previously unknown anomalous creature to mankind? Order not disturb the skeleton was sent for examination.

Sergey Savenko, Pyatigorsk museum: “They found an analogy, it’s even geographically not so far, this is the territory of Crimea. There have been dumping human skeleton was almost complete, but the hands and feet were cut somewhere to elbow and put in charge of the animal bones were, presumably, a goat. ”

Experts anthropologists have refuted all the fantastic theories, but none of the puzzles Nevinnomyssky burial is not disclosed.

Mysterious burial can excite the imagination of not only archaeologists. Dark Ages – that is all that is known about him yet, some information about the ritual of the specialists there, perhaps because of such artifacts in the North Caucasus had been found.

For all other archaeological features Nevinnomyssk burial is typical for its era. In the afterlife of the deceased was seen off, observing the necessary rituals. The tomb was found weapons and utensils.

Sergey Savenko: “It’s really an unique ritual situation. Whether it was a special man, who had to bury so. ”

The Adventures of archaeologists from the very beginning Nevinnomyssk bought some anti-scientific tone. Not far from the first discovery expedition accidentally unearthed the remains of a horse epic proportions. Warhorse had giant growth – almost two meters at the shoulder(1 meter ≈ 1.09361 yards), and was buried with honors uncharacteristic of the animal.

Anna Shvyreva, Department of Nature in the Stavropol Museum: “For this horse had been dug in the ground a special bath. It was filled with grass, and horse in the tub on his back. ”

In this article:Russia, satyr, skeletons, Stavropol