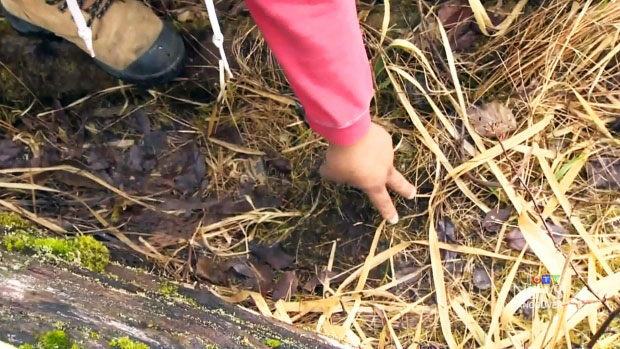 A fisheries officer claims to have witnessed a large bipedal creature on the Canadian shoreline.

A hairy creature conjuring the Sasquatch of North American folklore is stomping around Vancouver Island, according to a young First Nations man who claims he had a startling encounter with the beast.

Fisheries officer Luke Swan Jr. told CTV News he was out in his boat patrolling Ahousaht territory near Tofino last Wednesday when he saw a mysterious figure crouching on the coast.

“Something really big stood up, probably between eight or nine feet,” he said. “The first thing I had in my mind was to get off the beach. I pushed off as fast as I could and got to deep water.”

Luke Swan Jr. and Sr. believe they may have found Sasquatch tracks on Vancouver Island. Mar. 4, 2014.

Swan Jr. said he couldn’t identify the creature but has seen enough bears to know it wasn’t a bruin.

After gathering his wits, the young man told his father what happened. They went out searching and claim to have located a number of possible tracks in the area, which they measured at 16 inches long and seven to nine inches wide.

“We went further into a stream and into the river and found more footprints, so it’s out there,” Luke Swan Sr. said.

The family photographed the markings, as well as Cedar trees that had been stripped of bark about eight feet off the ground. They believe their findings point to a Sasquatch, the legendary biped that has purportedly been spotted in the Pacific Northwest for about a century.

Sasquatch sightings are generally dismissed as misconceptions or hoaxes, due to lack of convincing evidence and abundance of proven frauds, but interest in the legend persists.

Swan Jr. said Sasquatch-watchers should be careful what they wish for.

“When I saw it, it scared me,” he said. “A lot of people probably want to see it, but in the end it might scare them too.”

According to the Bigfoot Encounters website, one of the earliest Sasquatch sightings took place in B.C.’s Toba Inlet. Prospector Albert Ostman claimed he was held hostage by one of the creatures for several days in 1924.

Advertisement. Scroll to continue reading.
In this article:Bigfoot, Vancouver Island