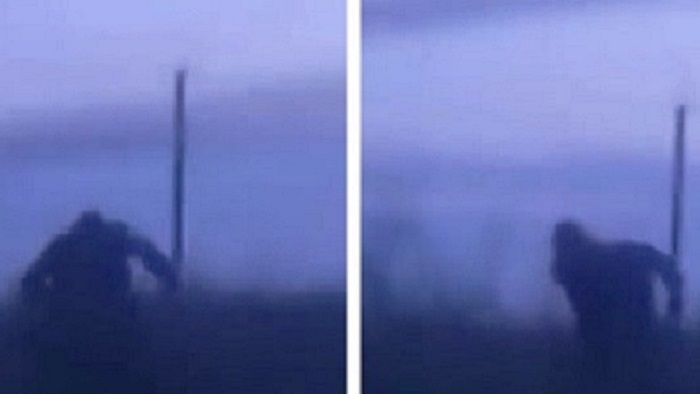 A few days ago, an interesting video filmed in the Birski District in Bashkortostan was widely circulated on the Internet.

The footage of the video was made by a group of local young people. They captured “something” dark and big. The creature, waving its hands, moves through the tall grass to the steppe path.

The creature apparently has a powerful back, broad shoulders and big hands.

This video intrigued so much Moscow’s Bigfoot researchers at the International Homology Center that they were refusing to leave Bashkortostan.

The head of the Center is the famous Russian researcher of Yeti – Igor Burtsev, who has been searching for these cryptids for half a century (he himself is 79 years old). According to him, he “lost sleep and rest ” when watching this video. He is sure that the captured video footage is a real Yeti, and they are by no means fake.

In an interview with the BTRC Bashkortostan, Burtsev says:

“This, I think, is the second such case in the world. It is very convincing. It becomes clear that this creature is running. In addition, as we were studying the video footage, I saw there at one turn a bulge – this is a woman’s chest. Do you understand? This is a female.”

The record was reported to have been made in 2016, but has only recently become widely available on the web. The authors of the video claim that this creature was chasing their car. At one point, it still manages to catch up with them and damage the trunk and the rear window, but that’s exactly what they couldn’t take.

Burtsev was already out of the forest in the Birski area and immediately saw the traces of Yeti’s presence. He shares:

“When we entered the forest, we saw broken branches. We were back there days ago. There are completely fresh footprints. The locals call it shurale, and scientifically called hominoid. It’s also called Yeti and Bigfoot, but these are all names of the same being. “

According to media reports, the scientists spent several days to  interview local residents if they have seen a shape-shifting Shurale, a creature in Bashkir and Tatar folklore. It’s referred to as a forest spirit but believed to be a shapeshifter which can have a humanoid body with long fingers, glowing eyes, a horn on its forehead and a woolly body

Unfortunately, the original video has been removed from the web, which raises many questions …

You can see the edited video below.