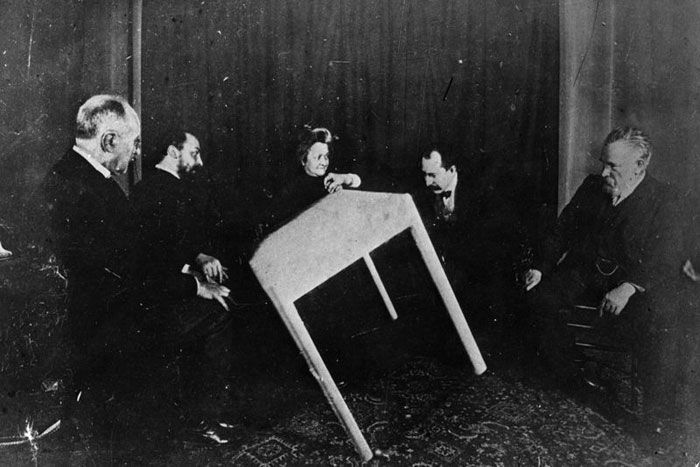 The numerous stories about mediums and psychics are often dubious, but the story of Florence Cook led people to believe that ghosts live among us. Who the famous London clairvoyant really was, and how she managed to achieve such success?

The name Florence Cook is firmly embedded in the history of spiritualism – all the inhabitants of the United Kingdom of the 19th century knew about her experiments, and not only prominent scientists of that time were interested in her activities, but also writers, psychologists and even members of royal families. We tell the story of a legendary medium who was able to prove to people that death is just an intermediate stage between the past and the present.

The future legend of spiritualism was born on June 3, 1856 in one of the north-east boroughs of London. Her family belonged to the middle class – her father was engaged in construction, and her mother was a housewife. From childhood, Florence showed her psychic abilities – according to her mother, the girl from an early age had the ability to feel spirits, which often frightened others.

However, the first time that Florence was able to demonstrate her talents in full force, was an incident that occurred in 1870 – then a group of Florence’s classmates gathered in the Cook house, who decided to hold a session of spiritualism called table turning. At the beginning, the girl did not want to take part in the process, fearing the possible consequences, but her mother, who supported her daughter, allowed her to prove herself. Sitting at the table, young Florence was able to establish contact with the ghost in a matter of minutes, as a result of which the table, which was a conductor for their communication, began to spin at an unimaginable speed, and then rose into the air with Cook herself.

This incident marked the beginning of Florence’s career – since then, residents of London, who knew about her extraordinary abilities, began to regularly contact her. However, the more often Cook conducted spiritualistic seances, the more her strength grew, and the process itself often began to go beyond security – for example, once during a seance, Florence soared in the air, and the ghosts completely undressed her in the presence of participants in the process.

After this incident, the girl’s mother insisted on establishing certain safety rules – from that moment on, Florence began to receive visitors exclusively in the dining room of their house. During the sessions, the medium herself was inside a huge wardrobe – the girl tied herself to a chair in order to remain motionless in a trance state, while clients were outside and communicated with the spirits through a small hole made in the closet door.

Very soon Florence had influential admirers – members of wealthy families who turned to Cook for help, tried in every possible way to thank her for the work done. Some simply paid generously for the sessions, others did advertisements for her, but the most grateful was the lawyer Charles Blackburn – after contacting Florence, he provided her with an annual allowance, which allowed the medium to fully focus on his own activities and conduct sessions for free, without thinking about the monetary side of the issue.

In 1872, a spirit appeared in Cook’s practice, which glorified her not only throughout London, but throughout the United Kingdom. During one of the sessions, a ghost appeared in front of Florence, calling himself Cathy King. According to her, she was the daughter of the famous pirate Henry Morgan and returned to the earthly world to pay for the sins she committed during her lifetime.

Since then, Katie has become a regular guest at Cook’s sessions, and a few months later, more than half of Londoners already knew her. They described the ghost as a small white spot that, with each new appearance, took on more and more human form, filling with ectoplasm. Already at the end of April 1872, clients of the medium could see Cathy in the guise of a woman in white robes, whose image did not in any way give out a ghost in her.

This phenomenon became a whole event for the residents of London – Florence Cook was recognized as a genius of materialization, and the number of her clients grew every day. At the same time, the power of the medium also grew – a year after the first appearance of the famous spirit King, Cook was able to achieve her full presence in the world of the living – now visitors could not only touch Cathy, but even photograph her with a flash, which was previously considered impossible by representatives of spiritualism.

However, there were also those who did not believe in Florence’s ability and passionately dreamed of her exposure. One of such people was the lawyer William Folkman, who decided at all costs to expose the medium. During his session, he abruptly jumped up and grabbed the hand of the ghost of Katie King, wanting to prove that she was Florence in disguise. However, Folkman’s plans were not destined to come true – instead of the long-awaited exposure, he saw an angry spirit literally dissolve in front of his eyes, and when he opened the cabinet door, he found Cook unconscious, tied to a chair.

As the assistants of the medium present in the house later reported, William Folkman provoked the so-called ectoplasmic stroke, a phenomenon in which the sudden interference of an outsider in a spiritualistic session provokes too rapid “absorption” of the energy released by the ghost into the medium’s body, which is fraught with serious mental and physical disorders. and sometimes death.

Fortunately, Florence managed to avoid serious consequences – after this incident, it took her only a few weeks to recover, and rumors about the reality of Katie King’s ghost only attracted new clients to Cook’s house, and also drew attention to her activities of one of the prominent scientists of that time.

Upon learning of the incident at Florence’s home, renowned scientist William Crookes decided to collaborate with Cook. He bought an apartment for her in London and began to regularly participate in her seances. When he first saw Katie King’s spirit, he immediately checked where the medium was at the moment the ghost appeared, and found that she was sitting motionless in her place while Katie wandered around the room.

To prove the reality of what is happening, Crookes began to attract outside observers to his work and tighten the conditions for the sessions. So, Florence began to be tied more tightly to her chair, in the room where she was, it was decided to leave the “onlookers”, and once one of the participants in the process even tied Cook’s hair around a nail nailed to the floor, but all these measures did not prevent the medium from establishing contact with Katy – the spirit continued to regularly appear at meetings with representatives of the earthly world.

The famous writer Sir Arthur Conan Doyle also mentioned this phenomenon in his works – in the book “History of Spiritualism” the author explains that in the beginning Cathy’s face strongly resembled the appearance of Florence herself, which often became the subject of controversy and all kinds of manipulations:

“This phenomenon is one of the mysteries of materialization, requiring study, not ridicule. The faces of ghosts that have only recently appeared in our world often resemble the faces of mediums. This is explained by the fact that the spiritual shell of the medium becomes the basis for the embodiment of the essence of the spirit, however, when they gain their own strength, their true faces are also manifested “

In addition, some researchers even managed to study the physical characteristics of the ghost of Katie King. One of the observers measured the pulse of the spirit, which was 75 beats per minute (while Florence’s pulse at the same moment was 90 beats per minute), and the other allegedly was able to cut off a strand of Katy’s hair – they were golden, and Cook was a bright brown-haired woman …

However, the main evidence of the existence of the ghost was the photographs that Crookes regularly took during the sessions. The scientist managed to take about 60 pictures, some of which were attended by Florence and Katie at the same time. Unfortunately, only a few of them have survived to this day, and skeptics argued that the footage was indistinct and could not serve as real proof of the existence of the spirit.

One way or another, everything ended in May 1874. During one of the sessions, Katie approached Florence and addressed her with parting words, saying that it was “time for her to leave.” When Cook regained consciousness, she suffered a terrible tantrum, and when Crooks was able to calm the woman, King’s ghost was no longer in the room. This was the last time they saw the famous spirit.

After that, Florence’s life changed a lot. She left her career, married and moved to Wales, where she was engaged in housekeeping. However, six years later, Cook again returned to her former hobby, presenting the residents to the ghost of a certain Mary.

In 1880, during another spiritualistic seance, one of the participants decided to test the reality of the presented spirit and grabbed Mary’s hand, at the same time opening the curtain behind which Florence was. To the surprise of those present, the room of the medium was empty, and the “ghost” was Mrs. Cook herself. This scandal took on a very large-scale character, and Florence’s reputation was hopelessly damaged. True, most of her supporters believed that the deception on the part of the medium was not intentional – according to them, this phenomenon may be due to the state of trance, in which the summoned ghosts have power over the body of the medium.

Florence herself was extremely upset by the failure and henceforth conducted sessions only in the presence of an outside observer who was next to her at the time of immersion in a state of trance. But this did not help restore her reputation – people no longer believed that Cook could speak to the spirits of the dead. Florence spent the last years of her life in solitude, communicating only with her husband. She died in 1904 as a result of developing pneumonia. After her death, William Crookes sent a telegram to her husband, in which he expressed his sincere condolences, and also noted her incredible contribution to the development of spiritualism:

“I express my deepest condolences for the irreparable loss, and I also want to say that thanks to the mediumship of Mrs. Cook, the confidence that those we love continue to live and look at us from heaven has grown in my heart. And I am sincerely grateful to her for that “

In this article:ectoplasm, Florence Cook