Bayer’s stock price fell to a seven year low this week, after the company lost a $2 billion lawsuit over claims that the weedkiller Roundup causes cancer. Roundup weedkiller is a product that was developed by the controversial biotech corporation Monsanto, but the company was purchased by Bayer for $66 Billion in 2016. Along with the acquisition of the extremely profitable company, Bayer has also inherited a long list of lawsuits and reputation problems.

Bayer’s stock has been in a freefall all year, as more bad news about Roundup reaches the public. The company’s stock is down by more than 44% since the acquisition of Monsanto. 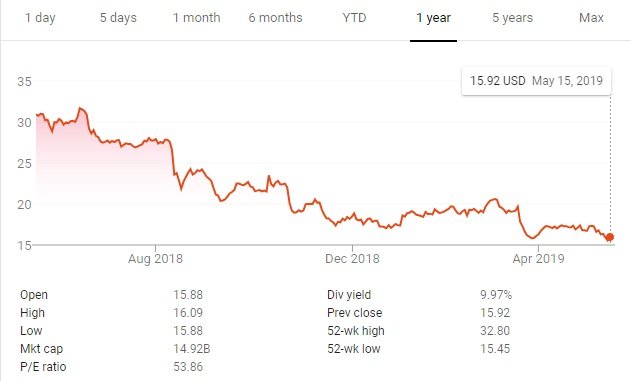 Roundup contains a chemical called glyphosate, which has been shown in many studies to cause cancer. Despite these findings, the EPA has concluded that the chemical is safe, citing other contradictory studies. However, as an Intercept investigation revealed, the vast majority of those contradictory studies were commissioned by Monsanto. The data that the EPA was using to determine the safety of glyphosate was actually provided by Monsanto, which represents an obvious conflict of interest.

As the expenses from the Roundup lawsuits began to mount, Bayer shareholders began to question the wisdom of the Monsanto acquisition.

Earlier this year, Bayer shareholder Christian Strenger, filed a motion of no confidence in Bayer’s board complaining of negligence on the part of Bayer CEO Werner Baumann in the Monsanto acquisition.

Strenger pointed to the “almost complete failure to deliver the key objectives presented by Baumann in May 2016 for the Monsanto acquisition.”

“Mr. Baumann from Bayer always refers to 800 opinions that glyphosate is a safe product. But the big issue is how was it applied, and was it sold properly with sufficient warning signs. [Bayer] should have insisted. These were not military secrets. Bayer should have told Monsanto, ‘Either you get the DOJ to permit disclosure, or we’re not going to proceed with the transaction,‘” Strenger said, according to Fortune.

Strenger accused the decision-makers at Bayer of being “lenient with a proper analysis of the legal situation.”

Among other complaints, the no confidence motion pointed to the elimination of 12,000 jobs at the end of November 2018, which is believed to be a result of the Monsanto acquisition. This is especially frustrating to shareholders considering that Bayer CEO Werner Baumann promised that the Monsanto deal would create more jobs at the company.

A spokesperson for Bayer has dismissed these concerns stating that the company’s board of directors “performed this risk assessment based on an information and update process which was in all respects adequate for an acquisition of such a scale.”

The spokesperson went on to say that, “Of course, in the context of the acquisition, the board of management also reviewed the risks connected with Monsanto’s glyphosate business. This risk assessment clearly showed that, when used as directed, the products of Monsanto containing glyphosate are safe. Based on the views held by regulatory authorities worldwide and scientists, the board of management assessed the legal risks in connection with the use of glyphosate as low.”

Last week, the French newspaper Le Monde, reported that Bayer hired the public relations firm Fleishman-Hillard to help them launch a counter-offensive against media critics. The firm reportedly compiled a list of over 200 journalists, politicians, and scientists, with detailed descriptions of their opinions on Monsanto.  The lists also included the phone numbers, addresses and, personal interests of these individuals. This type of activity is illegal under the European data protection law, so Bayer has since distanced themselves from the firm, and made an apology where they attempted to place responsibility on the firm.

John Vibes is an author and journalist who takes a special interest in the counter culture, and focuses solutions-oriented approaches to social problems. He is also a host of The Free Your Mind Conference and The Free Thought Project Podcast. Read More stories by John Vibes Follow on Twitter

**This article (Bayer’s Stock Has Lost 44% of Its Value Since They Bought Monsanto) was originally featured at TruthTheory and is posted here under creative commons.**

Advertisement. Scroll to continue reading.
In this article:Monsanto, Roundup weedkiller

Monsanto, the megalithic corporation responsible for Agent Orange and for inundating the planet with noxious PCBs for years with full knowledge the horrific damage the substances cause to...