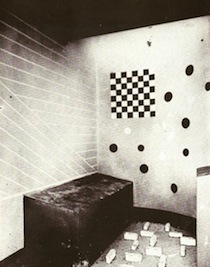 Not that I condone mental torture, but there is something appealing about anarchists using modern art as a weapon against the fascist war machine. From the Guardian archives:

A Spanish art historian has uncovered what was alleged to be the first use of modern art as a deliberate form of torture — mind-bending prison cells were built by anarchist artists 65 years ago during the country’s bloody civil war.

Bauhaus artists, as well as the surrealist Luis Bunuel and his friend Salvador Dali, were said to be the inspiration behind a series of secret cells built in Barcelona and elsewhere.

Most were the work of an enthusiastic French anarchist, Alphonse Laurencic, who invented a form of “psychotechnic” torture, according to the research of the historian Jose Milicua.

Mr Milicua’s information came from a written account of Laurencic’s trial before a Francoist military tribunal. Laurencic, a painter, created his so-called “coloured cells” as a contribution to the fight against General Franco’s rightwing rebel forces.

The cells, built in 1938, were as inspired by ideas of geometric abstraction and surrealism as they were by avant garde art theories on the psychological properties of colours.

Walls were curved and covered with mind-altering patterns of cubes, squares, straight lines and spirals which utilised tricks of colour, perspective and scale to cause mental confusion and distress. Lighting effects gave the impression that the dizzying patterns on the wall were moving.