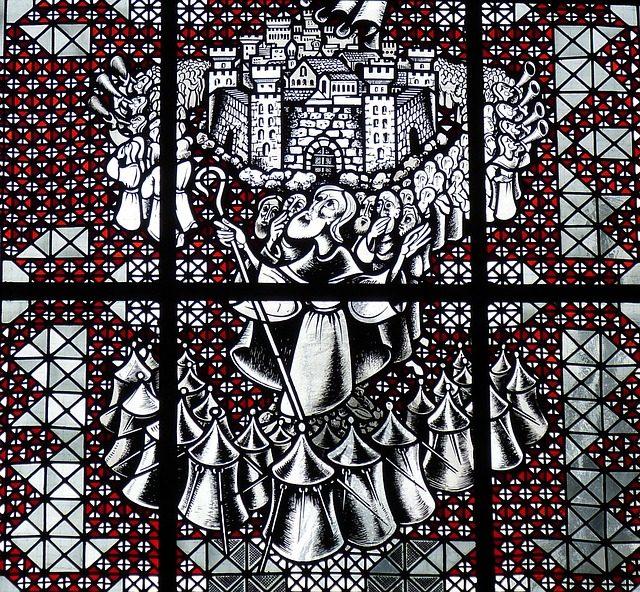 March around the city once with all the armed men. Do this for six days.
Have seven priests carry trumpets of rams’ horns in front of the ark. On the seventh day, march around the city seven times, with the priests blowing the trumpets.
When you hear them sound a long blast on the trumpets, have all the people give a loud shout; then the wall of the city will collapse and the people will go up, every man straight in.
— Book of Joshua

The trumpets of Jericho may be the most famous deadly horns, but others deserve some notoriety as well. The Jericho Trumpets the Nazis attached to their Stuka dive bombers shrieked a sound that terrified their enemies, but those horns also cursed their pilots by adding a 15 miles-per-hour drag that left the planes open to anti-aircraft guns and enemy aircraft.

Another set of horns-with-a-curse are the so-called Tutankhamun’s trumpets – the oldest operational trumpets in the world that also have a link to World War II. After they were blown for the first time in 3,000 years on a 1939 worldwide BBC broadcast, WWII broke out. Not learning from this experience, persons with access to the Tutankhamen’s Trumpets blew them again – in 1967 just prior to the Arab-Israeli war of 1967 and in 1991 before the – you guessed it – first Gulf War.One of these trumpets is now on display at a Tutankhamun exhibit in London’s Saatchi Gallery. Is it being protected by armed guards … guards with no lips?

“The reason we are here, we are celebrating almost 100 years since the time of the discovery of the tomb of Tutankhamun. It is the first time Egypt allowed this number of artefacts to leave the country … This is the last traveling exhibition of Tutankhamun.”

If this is the last time one of Tut’s trumpets will ever leave Egypt, the temptation to hear its sound is certainly going to be high. Exhibition curator Tariq El Awadi is accompanying it, along with over 150 items from statues to a funerary bed (pictures can be seen here), as “Tutankhamun: Treasures of the Golden Pharaoh,” makes its third stop on a 10-city tour before heading to Australia, Japan, Canada and South Korea. El Awadi assures the fearful that the silver trumpet on display is too fragile to be demonstrated. The other, made of bronze, was stolen from the Cairo museum during a riot in 2011 and mysteriously returned a few months later and is not part of the traveling collection.

“They won’t get cursed at all because we are here just to show the magic and the beauty of Tutankhamun and pronounce his name. Just to say the name of the king you are making the king live because it was very important for the ancient Egyptians to have their names always remembered.”

However, if one wants to hear a recording of that 1939 blast, the BBC preserved it and rebroadcast it in 2011 (it can be heard here with a photo). According to the report, the silver trumpet was played for the first time in 3,000 years by James Tappern of Prince Albert’s Own 11th Royal Hussars regiment at the Cairo museum. During rehearsals, the horn shattered and damaged the player’s finger and Alfred Lewis, a member of Howard Carter’s excavation of Tutankhamun’s tomb in 1922 who had restored the horn, had to be hospitalized upon learning the news.

The silver trumpet was quickly repaired but the curse remained. Five minutes before the live broadcast, power went out in the museum, only to be restored moments before the show. While it was deemed by experts to be too fragile to ever be played again, it’s claimed by many that a staff member at the Egyptian Museum blew into it a week before the Arab-Israeli war and another tried to play it before the 1991 Gulf War. Coincidences or curse?

“The English website then revealed that the sound of Tutankhamun’s trumpet could be heard through the audio guide of Tutankhamun located in London’s exhibition. They added that Dr. Tariq al-Awadi told all visitors that they were on a safe visit to enjoy and witness the charm and beauty of the Golden King.”

You can hear the sound of Tut’s silver trumpet – if you dare — at the BBC site or at the exhibit itself.

Advertisement. Scroll to continue reading.
In this article:trumpets of Jericho, Tutankhamun’s trumpets