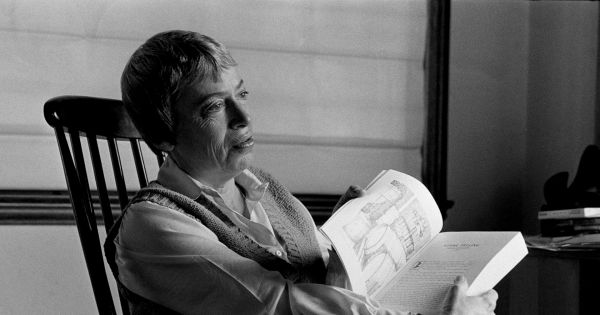 Movie soundtracks are cool. Know what’s really cool? Book soundtracks. For great books, written by groundbreaking authors, who also participated in the making of the soundtracks, which are genuinely, truly great, and also, sounded like nothing you’ve ever heard before. And if you’ve never heard of such a thing, that’s because it rarely happens.

Except: In 1985, science-fiction writer Ursula K. Le Guin published a novel called Always Coming Home. That would have been enough to satisfy her fans, you’d think, but as an added bonus, she bundled the book with an album on cassette: Music and Poetry of the Kesh.

Le Guin passed away in January at the age of 88, but her legacy lives on — this week, the label Freedom To Spend reissued that album in two extremely convenient formats, CD and vinyl.

In Always Coming Home, Le Guin introduces readers to the Kesh, a fictional tribe living in Northern California in the distant future, centuries from now. To immerse the reader in the world of these imagined people, Le Guin composed the book as a multimedia work, filled with poems, plays, illustrations, and even recipes.

But Le Guin wanted readers to literally “hear the music” of the culture she had created. For that, she enlisted the help of composer Todd Barton to create Music and Poetry of the Kesh. Like the freewheeling book from which it draws inspiration, the album isn’t restricted to any one genre or even traditional instrumentation. It provides the soundtrack to the Kesh culture through ambient field recordings, homemade instruments, and spoken-word poetry.

Music and Poetry of the Kesh draws from the past to tell the story of our potential future. And for listeners new and old, it sounds just as remarkable today as it did three decades ago, when it was first released — if it can score a coveted Best New Reissue rating from notoriously harsh music criticism site Pitchfork, odds are, it’s probably good enough for you. And if nothing else, remember: It’s a book soundtrack. ‘Justifies the price of admission alone.