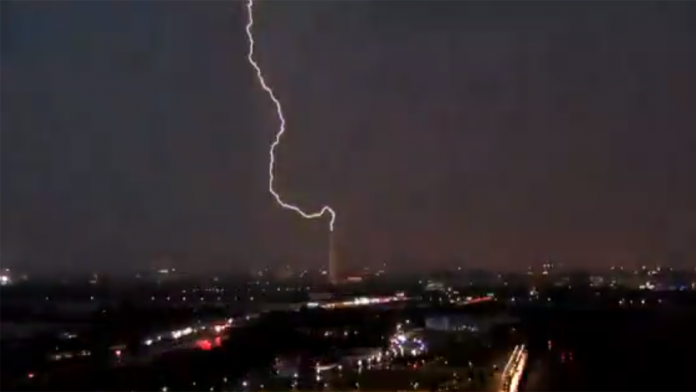 On June 3, 2020, an unusually strong thunderstorm began over the central Atlantic, formed by the so-called mesoscale convective system:

As the US National Meteorological Service explains, this is a well-described and occasionally recurring event, the result of which are stormy winds blowing on the east coast in an almost straight line:

The wind caused quite serious damage, in particular, about 500,000 people were left without electricity, which was replaced by thunder and lightning falling from the sky:

The lightning fell not just somewhere, but into the Washington monument:

The Washington Monument is a monument to the first US president, George Washington. It is a granite obelisk lined with marble, 169 meters high and weighing 91 thousand tons. It is the largest obelisk in the world and the tallest building in Washington.

There is not a single skyscraper in the city and, by tradition, none of the buildings can exceed the height of the Washington Monument, so the fact that lightning came directly into the monument is not very surprising: it must have got into it before. But the problem is that this definitely mystical sign is taking place against the backdrop of the riots.

The riots begans in Minnesota and swept almost 400 cities in the United States and somehow strange coincided that the epicenter of all this storm coming from the Atlantic was also … Minnesota.

Therefore, most likely the storm and riots are somehow mystically connected, and the fact that the lightning from this storm hit the main monument of the United States is clearly not a good sign, which portends something. But what? Natural disaster? Disaster? The collapse of the national currency or war?