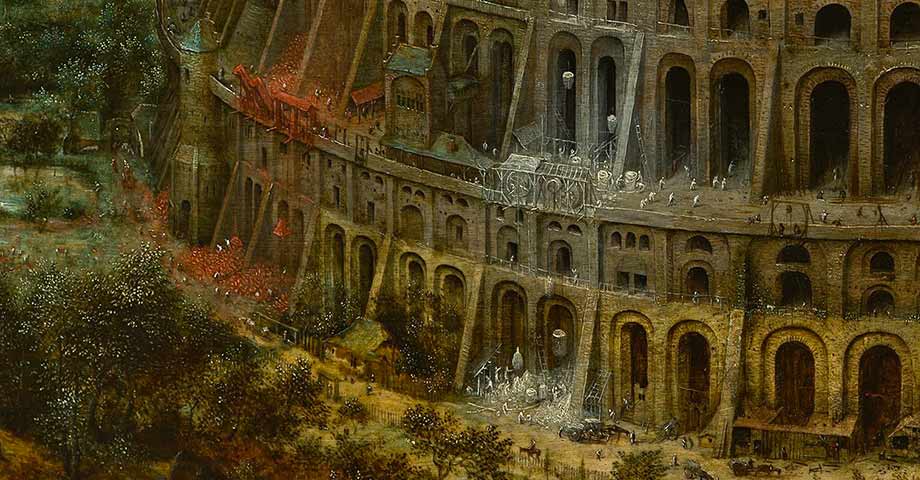 According to the Bible, in ancient times, people all over the earth were united and spoke the same language. These ancient people built a stunning city and began to build a tower, which, according to their plans, was supposed to rise to the heavens.

The rebellion of people against God led to their punishment and scattering across the Earth. People have completely ceased to understand each other. They scattered all over the world, and thus new languages ​​appeared.

In the Bible, the Tower of Babel (or Etemenanki) is referred to as a city and a tower at the same time. For this reason, many scholars have suggested that the Tower of Babel looked like a ziggurat. The Sumerian tradition of building ziggurats was adopted by other civilizations in Mesopotamia such as the Akkadians, Babylonians, and Assyrians.

The tower was built on what the Babylonians believed was the exact center of the universe. It was there, according to their faith, that their god Marduk created the world. Only there could heaven and earth unite if someone built a staircase that would rise high enough. This is what the Babel tower was supposed to be – a ladder high enough to climb up to heaven.

However, unlike the biblical story, Etemenanki was not demolished by an angry god. The Babylonians finished building their tower to heaven, complementing it with a massive flight of stairs that rose to the point that they believed connected heaven and earth.

Etemenanki’s upper level looked like a motel room for the gods. The floor was full of luxurious bedrooms, each with the finest beds and sofas with the names of the gods who were supposed to spend the night there. One was for the god Marduk and his wife Sarpanitum (Tsarpanit, Siduru), the other for Nabu and his wife Tashmetu. Others were intended for the gods of water, light, and sky. These places were obscenely luxurious, lavishly decorated rooms and remained completely empty. They were left for the gods, who, as the priests of Babylon assured, regularly dropped in at the Holy Inn to rest.

However, the strangest part of the tower was even higher. Above the upper level was a temple, which had nothing but a sofa and a table of solid gold. Only one person in all of Babylon was allowed to visit it: a woman chosen by the god Marduk to become his mistress.

The priests let a woman in the city know that God had paid attention to her. They sent her to the top of the tower to await Marduk. There she lay down on the sofa and awaited the arrival of Marduk. No one knows for sure what really happened there, but when the woman came down, she was quite sure that she had just made love to God himself.

However, the tower was not just a motel for the gods as it had other appointments as well. Babylonian astronomers climbed to its summit to observe the sky – and there they learned some incredible things.

Thanks to Etemenanki, the Babylonians had a unique opportunity to understand the movement of the stars. They had detailed astronomical diaries that tracked their movements. They observed Venus as early as the 17th century BC; by the 8th century BC they had made stellar catalogs; and by the 7th century BC they could even predict eclipses.

More than 2000 years passed before the tower was discovered by modern archaeologists. Etemenanki really existed.

A foundation was found that stretched 91 meters wide and 91 meters long in the center of a site half a kilometer in diameter. This is how the ancestors described the tower.

The North American Cherokee Indian people are aware of the great flood that once threatened their lands, and then the people decided to build a high tower to the heavens.

When people lived beyond the great waters, the Indians say, there were twelve clans in the Cherokee tribe. The country was prone to severe floods and then people decided to build a storage, to the very heavens.

The Cherokee Indians said that when the construction was completed, a flood would begin, and the tribe would leave the earth and go to heaven. They began to build a colossal structure, and when it ascended to heaven, great forces destroyed its top, cutting the structure in half.

However, the tribe was determined to complete the construction and the people began to repair the damage done by the gods. Finally, they completed the construction and felt safe from the floods. However, the gods became angry again and destroyed the upper part of the tower. When people decided to restore it, they found that the language of their tribe had been changed.

According to Indian legend, the god Aba initially made all people speak the same language, but over time they began to show curiosity and began to build a mountain of stones to reach the sky.

Every night the wind blew the stones down, dividing people into different groups, until on the fourth day people found that they no longer understood each other. They scattered across the land, forming various North American tribes, each of which spoke its own language. After that, they began to have conflicts with each other.

It is quite possible that once upon a time our planet was home to a single civilization that spoke the same language, however, most likely it will not be possible to confirm or deny this. And if it really was someone’s idea, then it was implemented very successfully. After all, we have many languages ​​and we do not remember anything about our distant past.

Advertisement. Scroll to continue reading.
In this article:Babel, Cherokee tribe