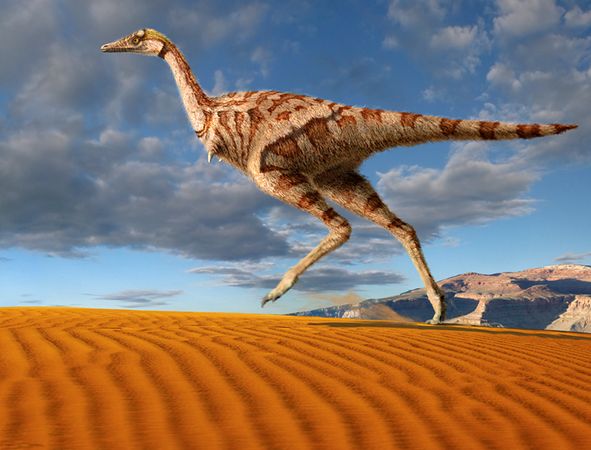 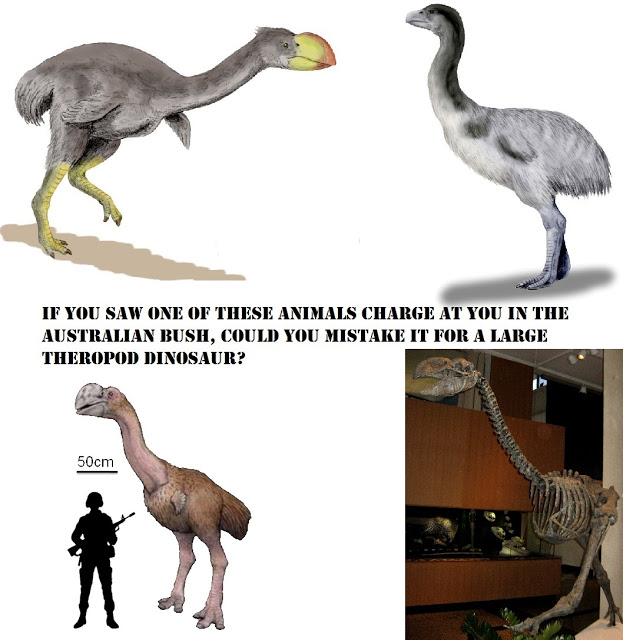 Image paste-up showing two depictions and a skeleton of the large Anseriform relative Dromornis; I also included a depiction of the  dromornithid Genyornis due to the fact that Aboriginal traditions and other evidence has indicated a late survival for this species.

While messaging a fellow cryptozoological researcher (whose excellent blog can be found here) about sightings of alleged dinosaur-like animals a few days ago, I was reminded of a hypothesis I had formulated a few years ago. This hypothesis was that some of the reports of theropod dinosaur-like animals from Australia could possibly entail a relict species of large, flightless bird belonging to the clade Dromornithidae. The theropod-like bipeds reported in Australia are known by names such as  ‘Kooleen’ or ‘Burrunjor,’ and are often allegedly seen in areas of small human population and bountiful wilderness such as Arnhem land.1 While I now think that a large portion of these sightings (if they are taken to be reliable) could be inspired by encounters with large monitor lizards that are momentarily standing on their hind limbs, other reports which entail quickly running bipeds leaving three-toed tracks suggest that a relict dromornithid may still be in the Australian bush. It’s extremely likely that these reports do not entail relict theropod dinosaurs, but it is arguable that a dromornithid could possibly act like, and thus be mistaken for, such an animal. One species of the Dromornithidae clade named Dromornis stirtoni stood up to ten feet tall and weighed 500kg, putting it on par with the giant moas of New Zealand.2 These flightless Australian birds had massive hind legs, deep lower jaws, and stubby wings, yet were relatives of the Anseriformes (waterfowl).2  Many paleontologists feel that the size and shape of their beaks and skulls suggest that these birds were carnivores, and biomechanical studies indicate that they were powerful runners.2 Therefore, there is plenty of evidence which suggests that a descendant of Dromornis stirtoni may exhibit behaviors and a physical appearance which could be interpreted as similar to that of a theropod dinosaur. But what evidence, other than reports, suggests that these birds may still be roaming the Australian bush? Dale Drinnon has previously pointed out that large, bird-like tracks and the alleged discovery of apparently fresh eggs (which were reportedly as large as those of Aepyornis maximus) suggest birds which are around ten to fifteen feet tall, although the age of these is not certain and most of this alleged evidence (except for some examples of cast tracks) is not available for scrutiny.3 These three-toed tracks are often found in conjunction with reports of calves being stolen, which further indicates the presence of a large, predatory bird species behind some of the Burrunjor reports. 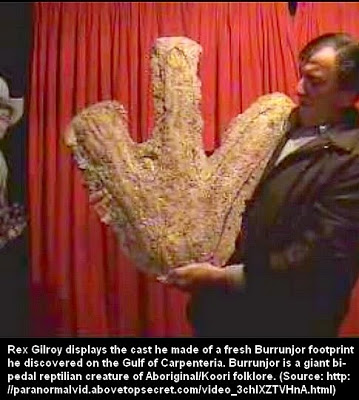 An example of a three-toed footprint allegedly left by a Burrunjor, being held by Rex Gilroy who claims to have cast it.
Dale Drinnon feels that this is possible evidence for large flightless birds still living in Australia, although he thinks that the apparent size is not truly representational and that the animal’s foot may have skidded. Also, it is evident that the outline of the actual footprint is actually smaller than the whole cast itself, as some plaster has formed around it. A video showing the cast can be viewed here. Please note that while I feel that it is intriguing, I am not necessarily supporting the footprint cast as valid evidence for relict dromornithids.

Below is another form of evidence which I feel supports the possible survival of a dromornithid species. It is an image of aboriginal rock art which shows an animal that looks like a large, flightless bird. I have shared it here in comparison to a reconstruction of Dromornis stirtoni. The art was shown on the Destination Truth Haunted Cave/Burrunjor episode and was noted as possibly depicting a Burrunjor. The host later wrote it off as a possible Thylacine depiction, but I noted its great similarity to a dromornithid with its powerful looking and rounded beak-like mouth, apparent feathers, short and stubby tail, apparent wings, and bird-like legs with three toed feet. 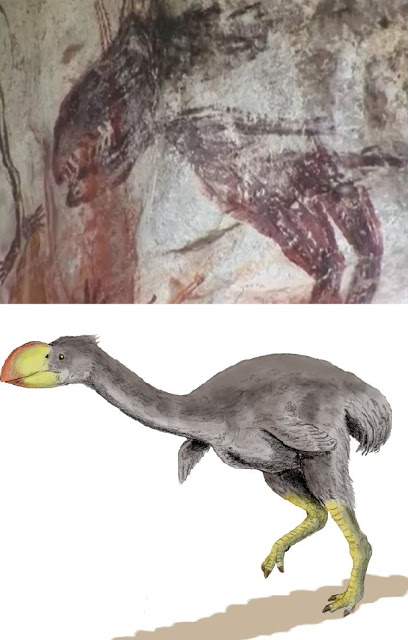 As I mentioned earlier, I think that a majority of Burrunjor reports involve large monitor lizards, as Dale Drinnon has discussed in this excellent article. However, the aforementioned aboriginal rock art and the reports of bipedally running Burrunjors which leave large, three-toed footprints fuel my continued interest in the possibility of dromornithids still surviving in the deep Australian wildernesses. Please note that I am not in full support of this hypothesis, but I simply wanted to lay it out in an article for others to scrutinize.

In this article:Australia, sightings, Theropod