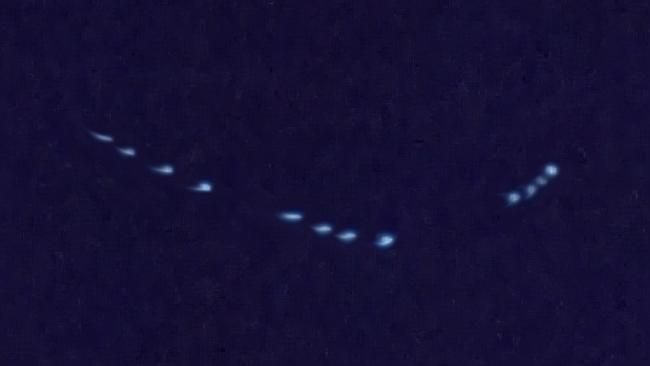 A “UFO” seen in Cleveland, Queensland, sent in after the Mt Annan sighting the previous week.

People from around the world have substantiated claims of UFO activity over the Macarthur region, with similar sightings as far away as Cleveland in Queensland and southern California.

The sightings come after the Macarthur Chronicle last week reported UFOs drifting over Mt Annan on December 1, which divided the community into sceptics and believers.

The reader from Cleveland in Queensland, who supplied the latest UFO pictures, said he was taking out the rubbish at 11pm on December 5 when he noticed strange lights in the sky.

“The light in the sky was dancing somewhat, so I grabbed the camera and started snapping away,” he said.

“The whole thing only lasted a few minutes but it wasn’t until I looked more closely at the images I wondered what I had actually taken.

“There were no planes in the area at the time of taking the photos that I could see.”

Another reader from California said they spotted the UFOs on December 7 under clear night skies.

“It came from a north west direction and headed south east, yet it seemed far from my point of view,” he said.

“The object appeared to have a tail like in the picture and then stopped and hovered for a bit before it completely disappeared in the middle of the sky.

“I am a firm believer in something extraordinary after this and there are things the government does not want us to know.”

However there was another local sighting at an Eagle Vale home on December 6, where a resident saw a bright orb move across a paddock at 3am.

The resident, who also didn’t wish to be named, said he watched the orb vibrate as it moved over the paddock.

“The light continued in a wavy motion across the top of what could be some houses or again farm land, then I lost sight, closed up my garage, went to bed and never thought much of it,” he said.

Advertisement. Scroll to continue reading.
In this article:Mt Annan, UFO